(Thanks to Mushegainable for the inspiration and the silly video.)

Dear reader, there was a time in the distant past, a time before Guy and Paula and Rachael when the Food Network had shows with real chefs about actual cooking.

The self-promotion was not shameless: Emeril Lagasse, despite his studio audience and catch phrases, makes a classic shrimp étouffée. For all his faults (Applebees?), Tyler Florence labored to teach American home cooks the value of brining pork chops and the secrets of a flaky dough for a tarte tatin.

And those are the weaker links (I say this with all due respect, Emeril is a giant and a humanitarian, and even now I feel a pang of nostalgia thinking of his catchphrases and "BAM!"; likewise, Florence is no slouch, despite being a target for one Tony Bourdain's constant derision).

Jamie Oliver is a chef of some infamy, having foolishly convinced himself that he could stand up against generations raised on High Fructose Corn Syrup and mechanically separated "chicken" paste. Chef, you were ahead of the curve sir, and your will be vindicated!

But I have a (totally heterosexual) affection for the lisping British wünderkind: he reminded me of certain high-energy friends of mine in the 1990s, always popping around town in his scooter and tossing out Cockney rhyming slang and hanging out with Jamiroquai like a boss. He was even a drummer in a rock band. Groovy.

Chef Oliver is not just some pretty face. He's a British Chef that defies us to question the tired stereotype that the British can't cook, cooking Northern Italian cuisine with British produce and and British accent (fresh minty peas, anyone?), and he has hipped me to more than a few techniques and ideas that I would have never considered, had I not been watching.

(Incidentally, if you can get it, Food Network Canada has some of the original network's panache remaining. Likewise, there is the "Cooking Channel", which is what the Food Network once was.)

Cooking Thanksgiving turkey is a pain in the ass. The birds are too big and the muscle types are too different. The breasts are done perfectly but the legs are undercooked. If you cook the legs properly, they can still be tough, and by then the breast is a dried chunk of sadness.

Of course, there are countless "tricks" to mitigate the engineering obstacles of cooking a 20-25 pound bird: cook it breast down, cover the breast with fat (bacon, pancetta), cover the breasts with tin foil, brine the bird (one should always, always do this!), steam the bird first, just fry the damn thing, stuff a duck in it and braise the sucker for hours and hours.

I've done it enough and I know I never want to do it again. I'm not interested in it anymore. It's water and turkeys under the bridge. I've proven my worth, and I want to redouble my efforts into a more worthwhile cause: how to make the turkey as tasty as possible, not simply properly cooked at the same time.

You heard me. Take the legs off. Take the wings off. Spatchcock the breasts, if you like, but leave the bone in.

The dark meat, of course, is my favorite, and we'll deal with them later.

But hear me out. Once I've pitched this awesome idea I got from Jamie Oliver you will think to yourself - my goodness, that's just crazy enough to be absolutely delicious! 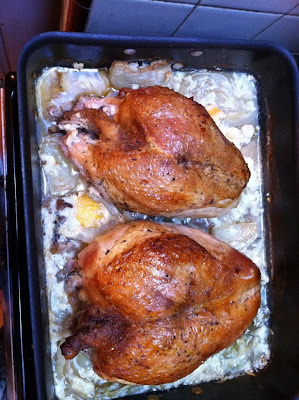 Turkey Breast Braised in Milk (or better still, Buttermilk):
Brown the turkey breast on all sides over high in a little bit of bacon fat. Remove from heat. Reserve the bacon and any rendered out turkey fat for gravy and what not.

Replace the chicken, adding the remaining ingredients, and bring the braising liquid to a simmer on the stove. Place the pot onto a cookie sheet and cover the pot with parchment paper and bake in a 375ºF pre-heated oven for 1 hour 40 minutes to 2 hours and 15 minutes*, basting after one hour and again after 30 minutes. Remove the parchment paper for the final 30 minutes of cooking to brown the breast skin, which should be facing upward.

The acid in the lemon juice will make the milk separate into lovely curds that can be used as a fantastic gravy for the breast meat or atop roasted vegetables (we love parsnips, cauliflower and yams, roasted with rosemary and olives and garlic).

* A fresh, natural or wild bird will cook significantly faster. Commercial birds are injected with brine and cook longer. Always start with the bird at room temperature, and cook until the thermometer reads 160ºF. Carry-over cooking will bring it to a safe serving temperature of between 165 and 172ºF. 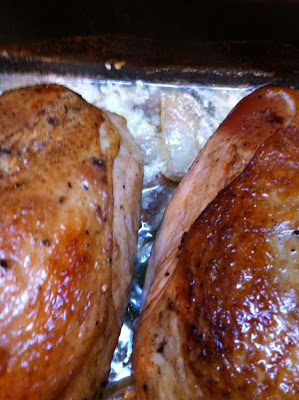 You notice we didn't brine the bird. We didn't have to, braising is effectively a real-time brine and simmering will infuse the bird with all the salinity and flavor you will need.

What to do with the legs? Here's a couple ideas:

They skies are the limit. Because you don't have to worry about the breasts drying out anymore.