Last Meal of 2012: The Beef Tenderloin of Destiny 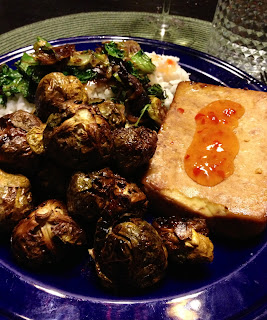 I have a half of a beef tenderloin in the freezer ready to thaw and throw onto the grill. I have elaborate plans for a variety of sauces for the beast. My wife the veggieterian is away on business and our child, my fellow meat-eater, and I have plans to ring in the new year in the spirit of our national love affair with gout. I was even going to throw in some potatoes of some sort!

In preparation for tonight's carnivore's delight, last night's dinner was a nearly meat-free combination of baked tofu in soy and sweet chili sauce, Brussels sprouts baked in olive oil, salt, pepper and bacon grease*, and a stir fry of Chinese cabbage from our garden, more Brussels sprouts, mushrooms, onions, garlic and kale with five spice powder over white rice. It was as close as I'll ever get to one of those hippy cleanses. The veggies would have their day and then tonight beef would reign supreme! Mwuahahahaha!

Before I could finish preparing last night's meal my daughter and I began feeling colds coming on and as of this morning it has only gotten worse. If we have anything besides chicken broth for dinner this evening it will likely be leftovers from last night, which was mighty tasty, by the way.

The beef tenderloin remains in the freezer. The sauces remain unprepared. From what I've been hearing from other family members who've had this brand of cold it only lasts a day or so. The beef beast may yet come out today if things change but I'm not counting on it. Maybe tomorrow, beef tenderloin. Maybe tomorrow.


*Grease up a baking sheet with bacon drippings. In a bowl, coat the sprouts in olive oil, pepper and as much salt as you can handle. Place the sprouts on the baking sheet spaced evenly. Bake at 400 degrees Fahrenheit for 25-35 minutes or until the outer leaves are burnt and the sprouts are crispy. Give them a good shake or turn halfway through baking. It's so good you might never eat Brussels sprouts any other way again.