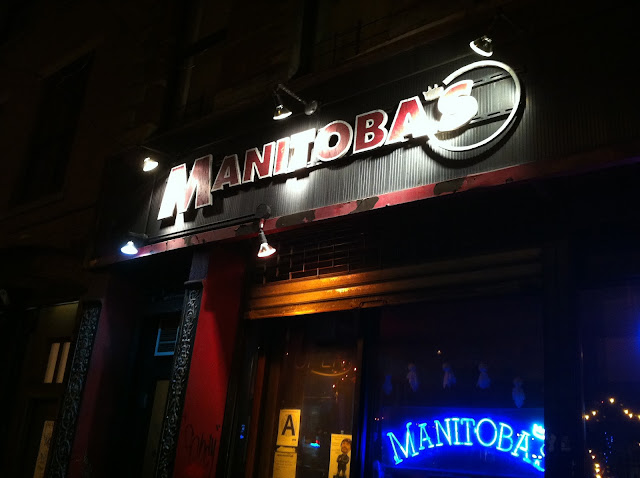 In many ways, the Lower East Side of Manhattan, before Parkslope or even (what's left of) Hell's Kitchen, is the proto-hipster (paleo-hipster? scenester?) neighborhood of Manhattan. In that light, it is easy to see some of the similarities between that neighborhood (urban, if slightly dangerous, multi-ethnic, youthful, trending, gentrified and finally tourist attraction) and San Francisco's Mission.

One walks around sepia tone streets off E. Houston at night, off Avenue A, B, East 1st Street all the way up to the 20s, and is haunted by the ghosts of New York Punk Past: Lou Reed, New York Dolls, the Plasmatics, sweaty summer night cameos by Syd Vicious, John Lennon and Blondie. Mick Jagger doing who knows what with who knows whom. Iggy Pop. 1977. Chesterfields and cheap gin. Grit, dirt and swagger.

Of course, the Lower East Side isn't the actual locus of all that is punk history ... but without New York in the late 1970s, just what would punk rock be? New York punk is sui generis.

Turning down E 7th, I stopped in front of the bar owned and named by The Dictators front-man Richard "Handsome Dick" Manitoba.

"Dick's there?" asks Facebook chat. It's Boris Wees, the four legged child of chef David "Stinky" Wees. It's remarkable that a dog can type so well.

"Yeah he's standing at the end of the bar as usual," I respond. The proprietor is on the premises most nights.

"Tell him Stinky from San Francisco says hello... if you want to get kicked out!"

Wees is joking about some chummy band camaraderie between his SF punk outfit and the Dictators going back to the days when I was in diapers. I don't inquire further:

I'm perfectly content sitting at the well-worn, slightly warped bar gazing at one of the most impossibly beautiful, super-model tall and tattooed female bartenders I've seen in my life.

Why yes, I'll have another whiskey and PBR. I silence my phone.

Weeks later, back in San Francisco:

It seems like everyone has a Dick Manitoba story (and several Lower East Side stories). I had a few of my own, even one on this recent trip. And I didn't even make it downstairs to Manitoba's infamous game room.

Most of them would test the limits of what is appropriate for this blog.

Also testing the limits of propriety would be the various late-night food "offerings" of the nearby bodegas. One featured over 100 sandwich choices. I took my chances on a meatball sub, regretting it almost immediately, late one night.

If you're in the area don't miss the Horseshoe Bar (under various names, including 7B), nearby on the corner of E 7th and Avenue B. Beware the photo booth of scandal!