Magic in a Bowl of Soup 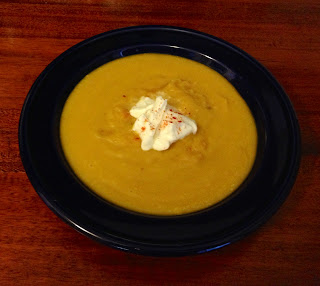 Wonder Woman was making butternut squash soup for dinner as I passed into the kitchen. She asked me to try out her creation and to see if I could determine what was missing. The problem she had discovered was obvious. Everything was flat. There were apples, carrots and pears in that mix and yet nothing was distinct. There was the taste of lemon but it was barely noticeable. All of her efforts sat dully in the pot.

I tossed in two handfuls of kosher salt and stirred the pot. We tasted the soup again and it had been transformed. There was the lemon. There were the pears and apples. Hello, carrots. As the salt urged molecules from each ingredient it turned tastes into flavors. It increased the soup's body and freed aromas. It had raised the soup from the dead.

Salt, that unassuming, common mineral, had performed its magic once more. Throughout history it has preserved our foods by dehydrating bacteria. It is essential to our bodies for its sodium and chloride ions. It helps our human machines maintain fluid balance. It vanquishes bitterness and uplifts tastes we enjoy. It turns a leaf into a salad. It makes a simple bowl of soup into a bounty of flavors.

Salt is fascinating stuff. If you're curious a couple of great resources can be found at Today I Found Out and at the website of the National Center for Biotechnology Information.
Email Post
Labels: cooking salt soup