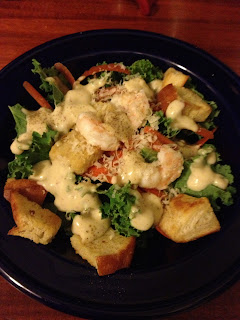 January 1, 2012 was the Internet birth of Chowbacca! Before that post about a sardine snack that I made for my daughter and myself Chowbacca! was simply an idea, a domain name, and some idling threats of a blog.

I'd thought that it might be nice to do another canned fish based treat this New Year's Day and take care of one of the unfinished post drafts from the previous year. So yesterday I looked back through my drafts folder and there was one titled Kale Caesar!

Heat the butter, two tablespoons of the olive oil and the bacon fat in a large skillet over low heat. Mince the garlic and add to the skillet. While the garlic heats cube the bread. When you can smell the garlic, take half of it and put it in the bowl you'll be using to make your dressing. Add the bread to the skillet and toss with the oil, fat and remaining garlic until coated. Put the whole skillet in a 400 degree Fahrenheit oven and toss frequently until crispy and browned. Put them aside. I have a warmer on my oven but covering them in foil works too.

With the minced garlic combine mayo, anchovies, lemon juice and the remaining olive oil less two teaspoons. Whisk until smooth and creamy. I know it seems like a lot of anchovies when most recipes call for one fillet, but you'll notice that they add salt from other sources. That's because they are wimps and can't handle the anchovy flavor. Let them eat ranch.

Wipe out your crouton skillet and add the last two teaspoons of the olive oil. Coat the skillet and heat over medium low heat. Add the shrimp and heat until cooked through, turning like a boss. Heh.

Put It All Together:

Do you really need me for this? Fine. Shred the kale into bite-sized bits. Top with the shredded carrot and croutons. Add shrimp. Dress it. Grate some Parmesan on it. Hit it with fresh pepper to taste. Serve. Eat. Good.

This just in: While it has been reported that Kaptain Kale had been killed in the not-too-distant future of The Bacon Apocalypse sources close to The Revengers have revealed that the Kaptain's flash-frozen head has been discovered in a reverse time capsule near the valley of another "HO HO HO" green giant who has asked to remain anonymous. Those sources have also told Chowbacca! that the good Kaptain can be re-grown using his head DNA and a little extra virgin olive oil. We will bring you updates as they develop!