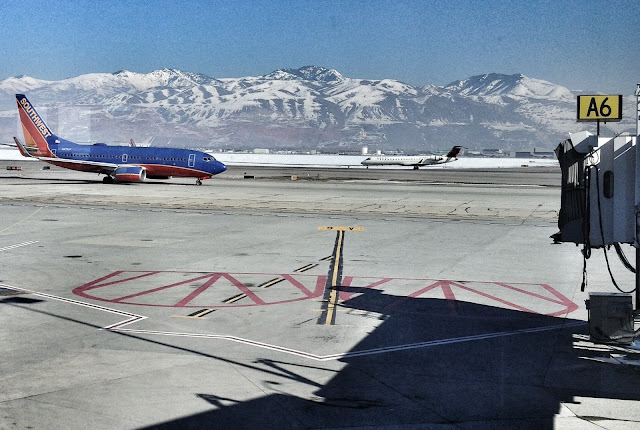 We were on the plane. The cabin door was closed. Portable electronic devices were, in theory, powered off. The "how to buckle a seat belt" pantomime had begun.

It was at about that time when the announcement came that the number two engine had failed to start. That announcement was followed by one asking that we remove our selves and our belongings from the plane and stay in the boarding area until a mechanic could check the engine.

Better at the gate than in the air, I was reminded.

The next announcement only announced that an announcement was forthcoming. After an hour or more of similar announcements, at the point where Ashton Kutcher should have strolled out and mocked us for being foolish enough to think that we would ever get back onto that plane, our flight was grounded and two ... two ... stalwart airline employees set to the task of untangling the now tangled travel plans of a full non-flight of pre-payed customers. Punked, indeed. Our consolation flight was three hours away. On the other side of the wringer, we made our way to Gordon Biersch for a much-needed meal.

Debuting in 1988 Palo Alto, CA, Gordon Biersch Brewery Restaurants have since opened across the country, including a location within Salt Lake City airport. Just knowing that it was there brought a smile to my haggard face. By the time we reached the hostess' stand our broken airliner was a million miles below me.

While security theatrics may be a big downside to modern air travel, the upgrade of concourse chow and beverage is an upside swing from the days of a fifty dollar Bud Light, the fizzy paddy water of beers, and a polystyrene plate of stale fries. That those same security theatrics more-or-less make we weary air travelers concourse captives, unwilling to remove our shoes once more for a second visit to the indignity of the "everybody's guilty" conga line, makes the restaurant upgrades at our nation's airports even more welcome.

At the comfortable Gordon Biersch SLC location I had a refreshing blonde ale and some tasty shrimp and lobster tacos delivered by a cheerful and efficient blonde server. I liked that I wasn't asked to choose between soft and crunchy taco shells. I got both shells, crunchy nestled within the soft, in a nifty metal taco rack next to my rice and black beans. Everyone enjoyed their meals, and a couple of beers later I was fully relaxed and ready to face the realities of modern air travel once more.