The Cheese Sauce That Kept On Giving 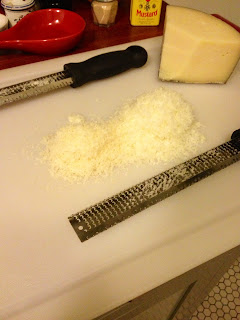 In our house we hate wasting food. So, we are always aware of what we have on hand and try to find ways to have fun with cooking it off and eating it. Our Costco-sized Manchego cheese needed some whittling down and I had some greens that needed eating so I made a really basic cheese sauce for pasta. I finely grated half Manchego and half Parmigiano-Reggiano for a total of about a half cup of finely grated cheese. Be sure to grate it really fine or you'll wind up with a lump of hot cheese.

I stirred the cheese into two tablespoons of melted, unsalted butter, with a clove of garlic I'd sweated in it, a teaspoon of Coleman's mustard powder, two tablespoons of flour and a half cup of half and half. I did the sweating over low heat and then kicked it to medium for the rest of the process.

At the same time, I cooked up some bacon that needed to go, some spaghetti and heated two tablespoons of olive oil in a skillet. When the oil was rippling I tossed in six shrimp and when the shrimp was showing done I added the greens, the bacon and then the pasta. A swirl and a toss and in went the cheese sauce. Another toss and it was time to serve. 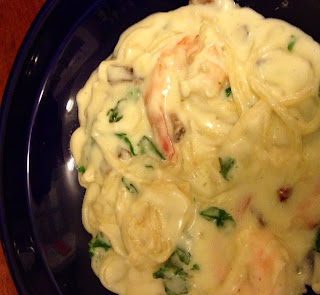 Now, about those potatoes. Their time had come. Again, cheese sauce to the rescue. I made the same sauce minus the flour and stirred it into mashed potatoes for the creamiest, most garlicky mashers. 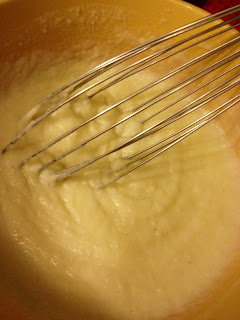 I served them with what the Wee Wonder calls "Chicken à la Dad", which is brined chicken baked in lemon olive oil, Wonder Woman's preserved Meyer lemons and some lemon pepper. 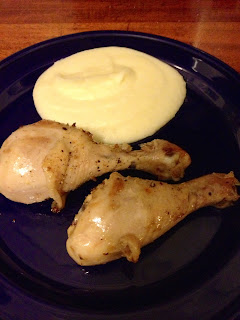 And yes, there was something green from the garden that needed to be cut back dressed with extra virgin olive oil, balsamic vinegar and pomegranate syrup. There were also some artichokes whose time had arrived, not pictured.

If you bought it, have some fun and eat it. The landfills get plenty. 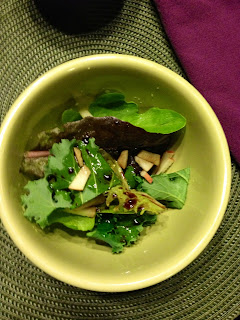