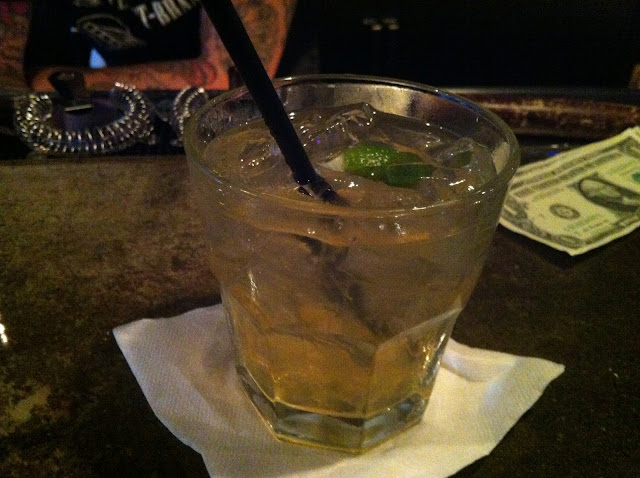 The real credit for inventing this cocktail goes to my old roommate the Lance Corporal (TLC), a kind of a renaissance man and ex-Marine, with whom I lived in Cleveland Heights in the twilight years of the 1990s. TLC, Sparky and myself made up an unholy trio and our apartment was a well known den of sin.

One week we decided to have an impromptu party, probably on a Tuesday, featuring the sidecar - a cocktail I was fond of at the time introduced to me by Riki - the same woman who revealed to me the glories of savory bread pudding, sweet breads, red wine, cheese affinage and a number of fine things (she also had a wild spirit, broke dozens of my plates and cups - often while flinging them directly at my head, and broke my heart several times).

Don't worry, we're all good friends now. TLC's punishment for his misspent twenties is being the father of daughters (in Arabic, this is a well known curse - in Cleveland Heights it is merely a hassle; suitors beware, I've seen what the man can do with a knife). Riki continues to show me new things: Wilco, pickled quail eggs, Sufjan Stevens, gin fizzes.

Gin. We'll get to that in a minute.

The component parts of a sidecar are brandy, which we often substituted with Maker's Mark, sugar, lemon juice and an orange liqueur like Triple-sec, Cointreau or in the case of this particular party Grand Marnier (the undisputed queen of orange liqueurs).

Hell, it was the 1990s, I wouldn't put it past us to get a bottle of Blue Curaçao and cue up the Fatboy Slim.

The great state of Ohio sells alcohol of a certain proof at the state-run agencies and that would put the kibosh on availability of certain specialty liquors. Grand Marnier, in Ohio, is a specialty liquor. A top-shelf item to display next to a dusty bottle of Midori and maybe an ancient bottle of sweet vermouth in Dad's liquor cabinet, opened once a year when the senior partner or the boss stops by for his yearly rubbing elbows with the underlings foray.

Ohio - I shit you not - where they chill red wine for lawn parties. You can't make this stuff up.

Well, TLC, Sparky and I go big or we don't go at all. So it was the liter sized Grand Marnier that we bought. By the time we had mixed up a half gallon of Maker's Mark, we still had half a bottle, now sitting on our mantel just like Dad's dusty bottle of Grand Marnier, marking time.

Later that previous week we must have been entertaining my other hair stylist, one GP, because there was a half empty 375ml bottle of Tanqueray next to the Grand Marnier.

After work one afternoon and already out of money for the week, TLC, Sparky and I had the following options to get our buzz on: drink the Grand Marnier straight, drink the gin straight, or mix them.

TLC, man of mystery, man of danger, renaissance man, was the first to take the plunge. TLC was always good for taking one for the team - storming forehead first unto the breach, throwing caution and often good-sense to the wind with wild abandon.

Remarkably, this combination worked. It worked so well that within a couple of hours we were staring at two empty bottles of liquor and singing along to The Smiths at top volume. I'll leave it as an exercise to the reader to contemplate the sad state of our persons the morning after.

I don't often think about Grand Marnier, but there it was proudly looming on the middle shelf of Double Dutch's impressive compliment of liquors one afternoon. The sun was out, the skirts were a little shorter, I was running around the neighborhood on my bike.

"Noah," saddling up to the bar for one quick one before heading back home, "this is going to sound weird, but can I have a No. 209 and soda with a splash of Grand Marnier?"

"Sure, but I have to give that a try," said Noah, grabbing a cocktail straw, plugging the top with his index finger and transferring half a sip to his mouth. "Not bad at all."