Mayonnaise? Tricky, but once you master it, it's your's forever.

Now we're going to throw you, dear reader, a curve-ball.

In our last installment we talked about how emulsions work, chemically. Emulsifiers, in the case of mayonnaise a phospholipid called lecithin, prevent globs of oil from ganging up together by suspending them in a water phase.

In this example we are going to raise the stakes: no more mustard to fall back on.* We are going to rely on the lecithin in egg yolks to do the heavy lifting, plus a small amount of lecithin in butter. The other handicap is that we are cooking these sauces - agitating the molecules with heat.

Successfully building one of these heated sauce emulsions is a test of the amateur chef's mettal.

* Obviously I used mustard, I can't help myself. I'm a big cheater.

Béarnaise is a cruel mistress. She is my albatross, my version of "The Scottish Play". Out! Damned spot! Out I say!..

Hell is murky, and a ruined béarnaise is... surprisingly fixable. More on that later.

Fate, not heat or chemistry, was conspiring against me this time:

First attempt - I got some asparagus and a couple nice rib eye steaks, got home and realized I was out of butter. I tried anyway, substituting bacon fat for butter (because fuck it, that's why... also I had been hitting the table wine).

Don't. It may make a stable emulsion but bacon is far too strong in flavor for this delicately herbal sauce.

Aside - it took me three attempts to mount a hollandaise for brunch with my aunt in upstate New York last November. Unfortunately the only hitches this time were shoddy camera work (no offense, Erik) and being interrupted by a phone call.

Our second attempt - the current one - had similar sourcing problems: this time, I had run out of eggs.

Fair enough, I hopped on my bike into the clear warm San Francisco afternoon and rolled over to Rainbow. Suffice it to say I did not escape unscathed.

I think I could probably just have a blog entirely devoted to "things I bought at Rainbow", because there's always something new and interesting to discover there.

Chanterelle mushrooms are not new to me, nor are oyster mushrooms or shiitakes. But they are new to 2013, the first of the spring foraged mushrooms (we're hoping that the black trumpets go down from $40/lbs and the morels show up soon).

California grown asparagus has hit the market like gangbusters.

Put all these things together and add a poached egg and you have one hell of a brunch.

The basic ratio for béarnaise, as with hollandaise - essentially the same sauce with different flavor components - is one stick of butter to one extra large egg yolk.

Both sauces can be used in multiple applications: béarnaise is an old-school steak house sauce for New York Strip and filets mignon, an accoutrement to crispy fried potatoes, a sauce for all manner of fish, poached, roasted and even fried, and of course, poached eggs and hollandaise in an Eggs Benedict. 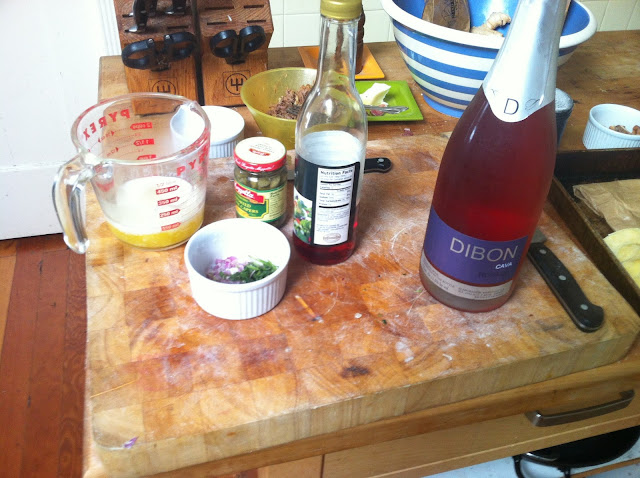 Boil water halfway up a saucier which will serve as the bottom half of a double-boiler. Turn off heat just prior to beginning.

Melt butter in a pourable microwave safe cup or in a sauce pan before beginning.

Reduce wine, shallots, tarragon, vinegar and half the dill in a sautée pan to a "napé"*, then add about 1/3rd of the butter, stirring it in the vinegar mixture while the pan is still hot, then remove from heat.

Place yolk, mustard and remaining dill in a stainless steel bowl that will fit over your saucier.

Strain butter and vinegar mixture into the stainless steel bowl and immediately begin beating. Transfer over the double boiler and continue beating while returning heat to medium.

Work quickly, add remaining butter in phases and whisk until almost the thickness of mayonnaise.

* A spoon or spatula drawn across the pan will leave a momentary dry trail behind it due to the viscosity of the liquid in the pan.

Erik has never seen anything like this before. California's gold!

As promised - to fix a broken béarnaise:

1) remove from heat.
2) strain out any solidified egg.
3) add another yolk.
4) whisk off heat until blended.
5) add cold water and a dash of vinegar.
6) return to heat, slowly, taking bowl or pan on and off heat as needed.
7) if you break it again, start over from scratch - and know that your water bath is too hot.

Note - as always, Rainbow will be closed this year in celebration of my birthday, Sunday, March 31st. Also, some guy named Cesar Chavez.