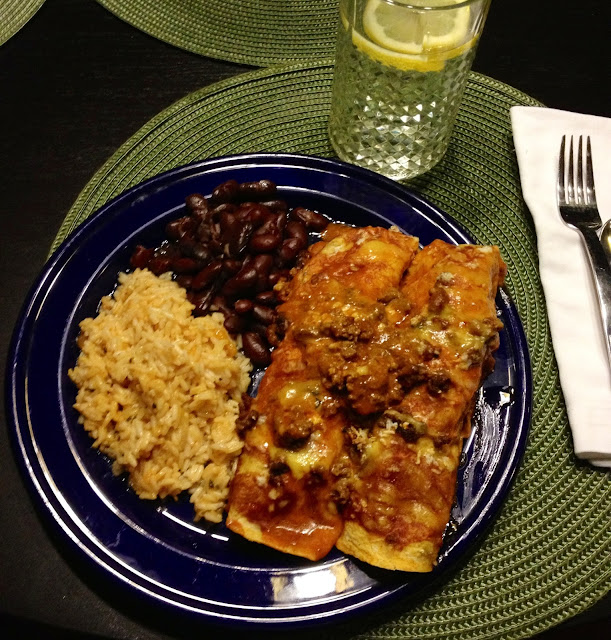 I was making beefy enchiladas with red beans and wanted to fake some Spanish rice to serve alongside them. My plan was to sweat some onion in olive oil, sauté some white rice in the oil and then ... well, there was a time when things would have ended there unless I'd had a container of broth or stock to use up. Since I don't often have room in the freezer for small amounts of stock to be stored it means opening one of those big containers and hoping it all gets used before it goes bad. That leaves small side dishes like the Spanish rice off of the menu.

Those days were over when I found vegetarian dehydrated chicken broth powder in the bulk section. With a ratio of a tbspn to a cup of water I can make as much or as little as I like with nothing left over. I've made as little as a quarter cup at a time. In fact, the faked Spanish rice worked great on a quarter cup. Where has this powder been all my life? Will it replace stock? Never. For small quantities, however, it's awesome. If you can't find it locally I've seen it online but it can be pricey.

Oh yeah, that "fakin' it" Spanish rice. It turned out great. I added the chicken stock and let it simmer for a minute or two over medium heat. The last ingredient was some medium-chunky salsa. It's also a great way to use some leftover rice. Game changed.
Email Post
Labels: Dehydrated Dinner Ideas Faking It Spanish Rice Vegetarian Chicken Flavored Broth Powder