Popping Up: Ori-Italiana Night at Truck

It's been a while since my last confession.

Back in my day a pop-up was something that happened in a music video, back when VH1 showed videos (however long after MTV stopped).

It is probably impossible for me to take most food "pop-ups" seriously since I immediately think about on-set injuries to pop divas during video shoots, trivia about shoot locations, extras and costume choices for a parade of pastel colored 1980s videos, baggy pants and bad hair and all.

Still, as has been pointed out in various news sources (LA Times, NY Times, The New Yorker, etc), the idea of a semi-underground food event has captured the imagination of young, coastal diners. For literally zero investment, save paying a few friends minimum wage and food costs, young and often out of work chefs can ply their trade in borrowed kitchens (often of defunct restaurants or in bars). The savings are passed onto the customers, who often interact directly with the chef when ordering.

Any naysayers who aren't convinced food is theatre (give them bread and circuses) haven't been out to eat anywhere noteworthy in decades, haven't turned on a TV and almost certainly do not read this blog.

Will my opinion of the pop-up soften after visiting one in SF with my platonic date?

Truck is a gay bar in the defiantly un-gentrified stretch of Folsom (at 15th) that starts around 17th Street and crosses Division and continues through San Francisco's mid-town skid row. Humble just like its surroundings, Truck is not a bar you would expect to ever see Martha Stewart or Ina Garten frequenting (unless their lives took a surprising turn for the worse).

That is not to say it's dirty, per se, but it is not fancy (although there is a well cared-for pleather couch outside on a roped-off stretch of sidewalk that functions as a smoking lounge). Mid-tempo rock and techno fills the room with auditory wall-paper while men and some women drink beers and cocktails and discuss the day's events.

Nestled in the back of the bar is a walk-up window concealing a tiny kitchen.

I meet my platonic date, the same from the night of poisson en crout, who greets me with a menu and a shot of Jameson. We make our selections and are soon tucking in to food in plastic bowls with plastic forks and plastic knives.

We ate (almost) "all the things": I ordered the ravioli, meatballs, gyros and beignets ($27 plus tip). The kitchen threw in the risotto for free (thanks!).

The two big winners were the raviolis, in a hot, salty broth and the "gyro", which struck me more like a Peking duck taco than a gyro (something that is much more traditionally sour - the oniony lamb meat, raw onions, tomatoes, cucumbers and yogurt sauce all sour elements).

Aside from the ravioli, everything had a very sweet element, pushing the envelope to "too sweet." In that sense, the influence of the Asian Pacific is felt more directly than the Italian (who are not unfamiliar with "agridulce" - sweet and sour - coincidentally as an artifact of Venetian cuisine subsequent to coming into contact with the Far East through trade routes established by Marco Polo).

The beignet, a French-Creole pastry made of fried pâte a choux dough, was delicious but as the menu's sole dessert item I felt it could have been more Asian influenced (and that the sweet could have been turned down for the savory courses - especially the cloying risotto).

Nitpicks aside, I left satisfied and with plenty of money left in my wallet. 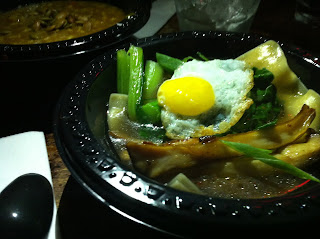 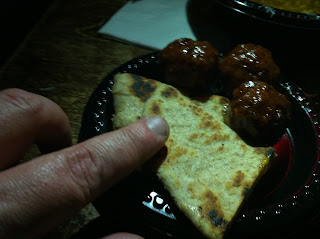 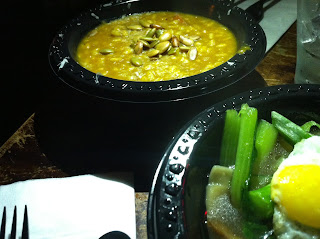 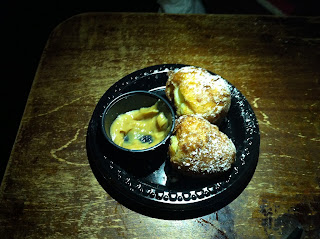 I have friends who refuse to make an effort to dine out for anything less than Michelin rated.

Why waste your time?

If dining is to be an experience - theatre even - then what is the pop-up? Is it burlesque (no, because it would have to be intentionally ironic)?

I think being able to eat good hand crafted food for cheap is a good trade-off for ambiance and plating. And there is a certain intimacy of interacting directly with a chef that rises above the meet-and-greet you sometimes get when the "star chef" comes to chat with favored patrons as Chef Crenn did with our table when I visited her restaurant.

Gimmicks come in all shapes and sizes, and there are some famously high-brow tongues buried in cheek in the world of Eat-mo-tainment (Thomas Keller's coffee and donuts and his salmon tartare "ice cream cone" come to mind); but is the pop-up intentionally self-mocking with it's plastic plates and lo-fi, a'la New York Dolls presentations? Maybe, maybe not.

In the case of Ori-Italiana, despite squalid environs and school picnic place settings the food had heart, and was definitely made from a place of love. What ever misgivings I had about seasoning or pairing choices I still can appreciate the effort put forth. Moreover, the risk.

So, can I bring myself to take the pop-up more seriously? Sure, why not? Even the French take the double entendre of an amuse bouche to heart ("to tickle the palette", more or less). Whimsy and food were strange bedfellows in ancient times, the days of bread and circuses but also the farce, literally stuffing one animal into another because, well, Greeks have a fucked up sense of humor.

I've posited before that food is the new rock and roll, chefs replace rock stars and... food bloggers replace groupies I suppose (and I'll never tell what I had to do to get Ruhlman to agree to be interviewed - except everything Bourdain says is true and more). Pop-ups are very much like the DIY, lo-fi no-wave club scene of the 1970s, played out in the same locales: Park Slope, The Bowery, Los Angeles, San Francisco, Seattle, Chicago even places like Boise and Cleveland.

Is it time to take the pop-up seriously?

Come on now, you had me at beignet.