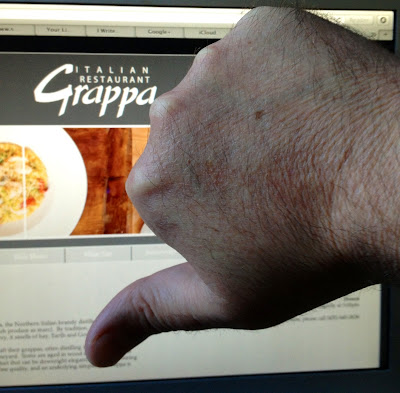 I've been eating in restaurants for almost my entire life, and I would never claim that every experience has been great. Mistakes have been made. Pizzas burned nearly beyond recognition have made it to the table. Orders have been forgotten or mixed up. Food has taken forever to emerge from the kitchen and sometimes has arrived cold or overcooked. A bit of crab shell was once missed and found its way, painfully, into my mouth. A raw quail egg served with some bone marrow gave me salmonella. Mistakes happen, and I've been on the receiving end of plenty of them over the years. In cases where the experience has been the exception and not the rule, where sincere apologies and efforts to make things right have been put forth by the restaurant, I have been understanding and forgiving. Having worked in areas of what is broadly called the service industry and being friends or barstool buddies with people who have worked in restaurants through the years I know the challenges involved in attempting to make everyone happy.

Grappa Italian Restaurant has created a new sub-level for dining experience, and I'd like to congratulate them for making my Blacklist! Great job!

Here's how's to guarantee that I never return to a restaurant:

1) Have the Manager and Cook Hang Out in the Kitchen Doorway Spouting "F-Bombs" and Making Jokes About a Machete Attack.

This is a crucial element to driving me from your door. Remember, you are not there to provide my wife and me with a satisfying dining experience in a romantic setting for our dining dollars. You are not there to keep the restaurant owner's tables full. Manager, you are not there to oversee your staff or make sure that they are trained on your wine list. Oh, and manager, make sure that you have five times more staff on hand than you need on a slow-ass Sunday night, so you have plenty of time to hang with your bro. Fuck the owner's payroll. Cook, the food can take care of itself. You guys are there to hang, am I right, bros? And fuck those families who had the nerve to bring their kids to your clubhouse. If we'd had our child with us, she would have learned a new word and all about cutting women with machetes. Cool.

2) When Someone Has the Nerve to Complain, Be Sure to Chuckle, Smirk, and Keep Repeating Your Mantra: "Well, It Is An Open Kitchen."

I mean, can't we see across the dining room? The kitchen is obviously open and offers something other open kitchens in cities across the globe don't offer: The chance to hear the word "FUCK" over and over. Awesome, right? People pay good money to be abused at Dick's Last Resort, and that's only some bullshit jokey abuse. This is the real deal. The owners should be charging a cover for your hilarious banter. Joke us if we can't take a fuck. And if we can hear you across the dining room, surely we can see that the kitchen is open. People like us deserve the least sincere apology that you can chuckle.

3) Hang Tough. When One of THE COMPLAINERS Says That They Worked in Human Rights, Including Working With Victims of Machete Attacks, and Was Upset by Your "Attacking Women With a Machete" Jokes, Keep Repeating Your Mantra: "Well, It Is An Open Kitchen."

Because, well, because, right?

4) Overcook the $39 Salmon Entree and then Stick It Under A Heat Lamp. Who Has Time To Fucking Cook?

I suppose that I just didn't taste the genius behind serving a hunk of fish that was the texture of teak over a wilted jumble of mush next to a shriveled lemon covered in burnt caramel. It's just that no other restaurant has prepared me for such culinary daring. Bravo, Iron Cook! You, sir, are turning Italian cooking into "Meh-talian"! Bravo!

All of that comping bullshit is for lesser restaurants, right, bros? Or is it for greater restaurants? I've been offered sincere apologies and had checks adjusted for mistakes at everything from hamburger places to ... well, restaurants competing for your patrons, and do you know what it's done? It's kept me coming back. Hang tough, bros. Anyway, it isn't your fault that we were referred to the restaurant that employs you in the midst of your "epic bro-down." The check is the check, and that's what we got, that's what we paid, and that's what we tipped 20+% on because the server you were too busy bullshitting to train on the wine list was doing her best and the bus boy was doing a good job. Hang tough, bros.

6) Hang Tough. When the Person Who Recommended the Restaurant You Work At to THE COMPLAINERS Calls to Complain Himself and Asks You To "Make It Right," Don't Do ANYTHING to "Make It Right."

Because what's one person or more who won't patronize the restaurant you work at, right? Right.

Well, folks, that's how it's done. I hope that all of you aspiring blacklisters have learned from the masters. Those "fly-in-my-soup" moments are too easily forgiven. You want to salt some scorched earth if you expect to keep me from coming back. There is, however, a little more to the story.

The person who recommended Grappa, having gotten nowhere by calling the restaurant's mis-managers, decided to call up the food chain to the restaurant group's corporate office. Coincidentally, I decided to email the corporate office just to let the ownership know the level of disregard and shit service being dished up at their restaurant. It's been my experience that if one person is complaining, there are at least five others who haven't said a thing. With all of the competition for dining dollars in Park City, and a struggling economy, who can afford to have employees treating the place like their own private clubhouse? Certainly not Grappa's ownership. If there had been more patrons than servers in Grappa that night, my wife and I might not have overheard the "fuck-fest" from the opposite side of the dining room. If it were my restaurant, I'd want to know.

A full day later I received an email reply from the Director of Operations for the group. She was nice, professional and seemed sincerely apologetic. She said everything that she was supposed to say. Then she offered my wife, daughter and I an evening at Grappa so that we would see that our experience didn't reflect the standard of service at their restaurants.

My wife and I discussed it, but in the end, we couldn't accept. Why give them an opportunity to spoil our trip further? I'm sure that the cook would be more attentive to our meal, but I'm also sure that I don't want to eat what he makes for an encore. And, I'm not sure that we'd have received the most gracious of apologies from the manager who didn't give enough of a fuck not to fill the dining room with his fucking language in the first fucking place. No amount of assurance can convince me that after striking out three times, his next chance at making things right would be a home run. Lastly, our daughter doesn't need to learn any new words, thanks.

A fly in my soup? Forgivable. A stray bone? Spilled wine? A piece of shell in my salad? A burned pizza. Forgiven. Forgiven. Forgiven. All forgiven. Arrogant disregard for my patronage served up with a negligently overcooked $39 entree? No chance. Actually, no fourth chance.

Thanks but no thanks, Bill White Restaurant Group. If that is how your restaurant is being run, even on one night, then I suspect that it is indicative of greater problems not just in that restaurant but throughout the restaurants in your group. I'm not going to subject my family to the discomfort of some experiment in forced apologies to make anyone feel better about your bad hiring decisions. Good luck to you, but none of us will be back.

What, exactly, makes me such a know-it-all? Because at one point in my younger, arrogant service industry life I was that self-important dickhole disregarding people. I know that a second chance would be uncomfortable and unsatisfying just like I knew that complaining would go nowhere. And don't talk to me about karma. If it took this long and one bad experience for karma to "get me" then your god makes some weak sauce, hippy.

That said, I try to live by the rule "if you don't have anything nice to say, shut the fuck up." I have, as I've posted previously, had some great dining experiences in Deer Valley/Park City. The Farm. J&G Grill at St. Regis Resort. Riverhorse. Prime Steakhouse. All of these restaurants and more have done a great job providing the quality of food and service that keep my family and I coming back. I revisited some of my favorites on this most recent trip. You can read about my excellent experiences in an upcoming post.