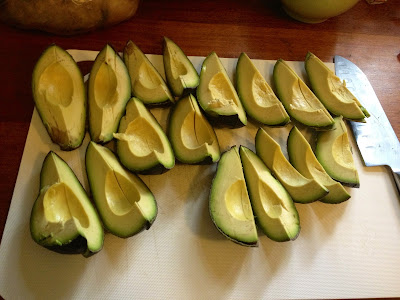 Well, it's been quite a week for avocados. I made a little salad. My new BFF, the Pinkerton avocado, ripened my life. Then Wonder Woman mentioned that four Haas avocados were in danger of making a trip to the green waste can so I Googled around for something to do with them, other than *YAWN* guacamole, and found ... AVOCADO FRIES!!!! 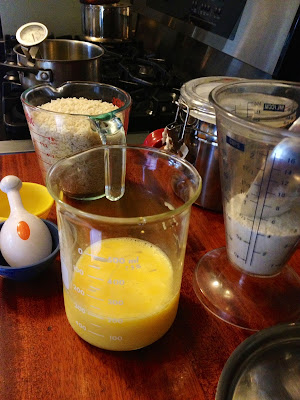 Just the two words together set my mouth to watering. Where have these been all my life? These things  were the brain children of Chef Trey Foshee of George's at the Cove in 2007. 2007!!! And I'm just now finding a recipe archived from Sunset Magazine of that year? Oh, Intert00bs, you disappoint me sometimes.

Moving on. So, I made them from Chef Foshee's recipe, doubling it to rescue my due-to-brown Haas' from the green waste, and served them with grilled rainbow trout (and tofu for WW). The verdict? Duh!!!! THEY'RE AVOCADO FRIES!!!! 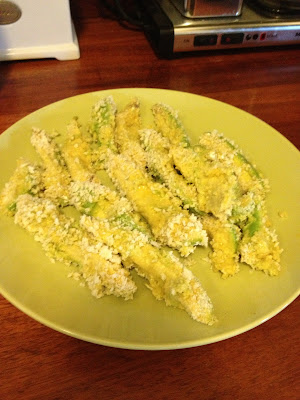 Duh-licious. But there was one thing missing. With fries there must be ketchup ... or malt vinegar ... fry sauce ... or something. Dipping and dripping go with the shape and and it just makes that good thing that much better. As awesome as these were on their own they still needed a dip or two. Fortunately, due to the number of avocados I'd had to cook off, I'd have plenty to reheat the next day for sauce pairing. 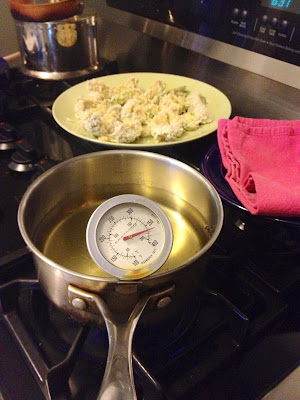 After kicking ideas around with my food-savvy sister-in-law our thoughts were "baja-style Sriracha", "something herb-based with cilantro or parsley" and "a bright lemon/yogurt/chives sauce with pepper and/or olive oil". Hmmmm ... what to do. What to do. 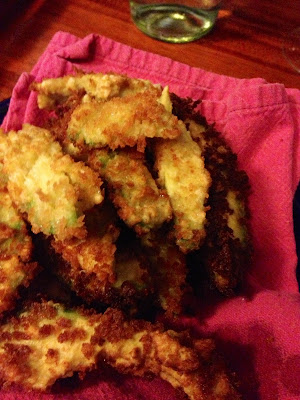 It's the next day and the sauces were made and have been eaten. DELICIOUS!!! Sorry that they are both yogurt and sour cream-based. I was in a really hungry hurry. I'll try out some other sauces next time, promise. 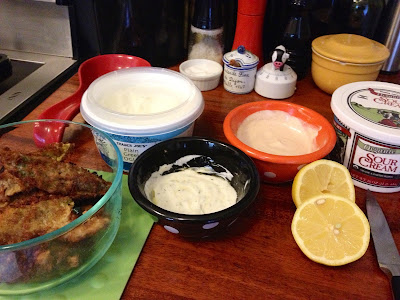 Now, get in the kitchen and make some*. You're welcome in advance.

*UPDATE: While I stuck to the recipe for the first attempt, I'm not a big fry daddy. My next attempt was a baked version and they came out even better than the deep fried version. Just wash and batter them up, put them on a rack on a baking sheet and spray them with oil. Set your oven to 350 degrees and keep an eye on them. When the bread crumbs have browned they are ready. You are welcome again.
Email Post
Labels: avocado Avocado Fries Chef Trey Foshee George's at the Cove Haas Pinkerton Recipes sriracha Sunset Magazine The Little Salad