While one can still find dim dens of darkly stained (and sometimes endangered) wood where, if the law didn't forbid it, cigar smoke would hang in the air, steaks would bleed on to the plate and martinis would be consumed by the half dozen, the modern business lunch is entirely a different animal.

In fact, it may not be an animal at all but instead some kind of vegetable: bereft of animus, defanged, declawed. An effete and sterilized avatar of the glorious excesses of the Mad Men era.

On the other hand perhaps this shift is not a trammel and the misogynistic paradigms of the back-room deal are justifiably left to the past.

I recently allowed my professional opinions be harvested, and quid pro quo, dined on the dime of someone else. There's no graft or shame in this: business relationships are kept up with the occasional tête à tête over salad and Arnold Palmers. "How's the business? What's new? Who do you know that is on the market? What are your observations?"

I have enough sense not to turn down a free lunch.

The Sheraton Sunnyvale on North Mathilda is bathed in sunlight. The architecture suggests Malibu bungalows, beige stucco and red brick tiled roofs. Trees and bushes have been carefully landscaped, providing shade (and a good bit of pollen to those of us sensitive to it).

In the courtyard, hidden from view of the road, an empty pool sparkles blue.

A younger me would have stripped down to my underwear and lept in head first into the deep end.

I adjusted the collar of my work shirt and noticed I was uncomfortably warm in the mid day sun.

Welcome to the California business lunch, where sunlight and open air trumps the board room, where there is no wisp of smoke, and where salad replaces steak. 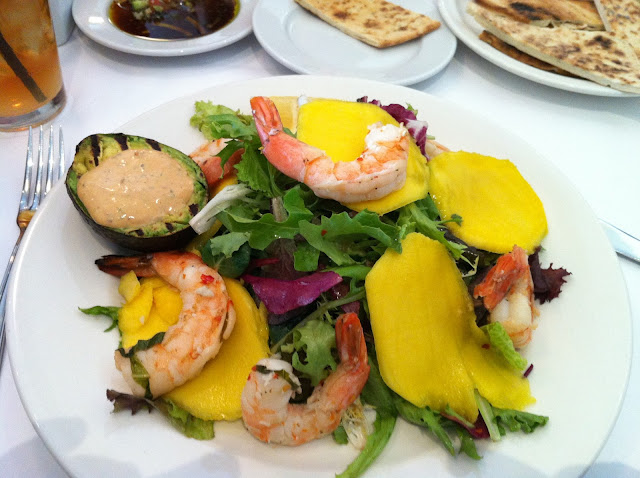 Faz Poursohi is an Iranian emigre who has built a small chain of "business lunch"-friendly casual restaurants that feature Mediterranean accents in Pleasanton, Danville, Oakland and Sunnyvale.

Taking a nod from Italian restaurants (and the so-called "sucker course" commonly found at the checker tablecloth variety), each table is seated with warmed flatbread and a plate with olive oil, cheese,  some tomato and onion and vinegar. 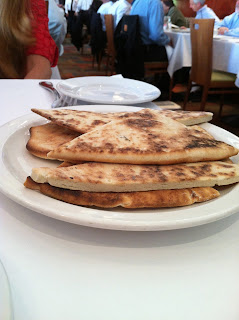 The food is consistent, and although I have rarely had anything heavier than a salad, the braised dishes look to be competently prepared and a number of lighter grilled items grace the menu.

The trouble with business lunches is that you don't want to be bogged down with something heavy - since you'll be nibbling and gabbing. I will have to go out on my own to explore the rest of the menu. 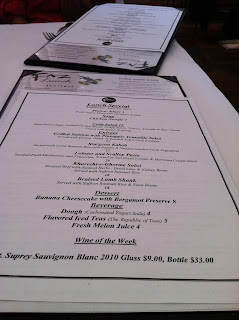 The steak lunch of old - how was business conducted over such a hearty meal? And after how many martinis or Manhattans?

Maybe it's better this way - I can only imagine what opinions I would offer up after two martinis on the state of business in Silicon Valley.