More Manhattan Madness and Other Cocktails

Boy, how about this heat (apologies to those in the Midwest recently dusted with April snow)?

Well, it's unusually hot in the Bay Area, which is fun for beach goers and people who like to show a little skin (but not all of it - at least not these days). It's not so much fun if it keeps up and half the state burns down like it did in recent years. With that in mind, and in light of the world going mad, I decided I should get out of the house and have a nice bike ride.

Pedaling around my normal haunts over the weekend I would have been remiss not to stop by Lucky 13 on Market to spend some quality happy hour time with Lotta.

Delirious with heat, we concocted this monster:

The Shirley Temple of Doom:
Enjoy responsibly, lest ye be Shanghai'd onto the Good Ship Lollypop, arr! 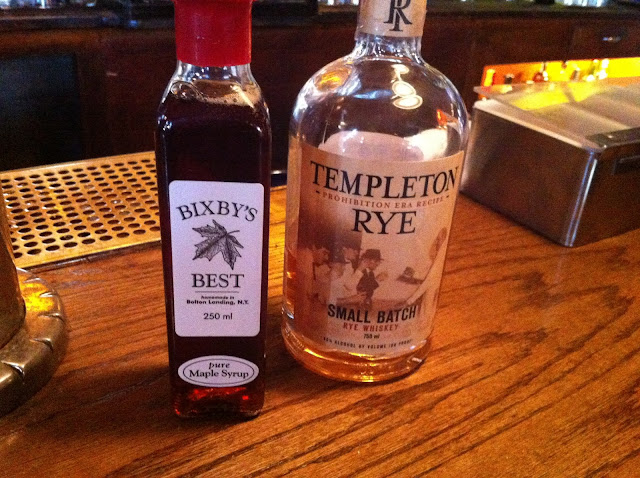 March madness. It's not NCAA basketball, but it's the post-seasonal affected disorder pre-birthday mania that has become part and parcel of the month of my birth. Truly beware the Ides of March - for that is when us Aries and myself in particular start to become feisty.

This year I came through it with only nominal injury to myself - a few cuts and scrapes from cooking and prepping food for our Aries party, a couple burns the day of, a few nasty hang overs.

As the distance between myself and age 30 grows more vast and the gap between me and age 50 grows narrower and narrower still I've learned to slow it down and appreciate moments, not so much manufacture them. To delight in finer things.

On my actual birthday I cooked rib eye steaks for myself and my mother and her two cats, who got the trimmings, while watching the season premier of Game of Thrones. This lead to a relaxing soak in the tub and a nap. When I awoke, it was no longer my birthday.

For once in years I had a legitimate reason to not remember what I was doing at midnight on my birthday.

Upon returning home to my apartment in San Francisco, I was greeted by a parcel from Bolton Landing, New York. I had only to pick it up, judging it's weight, to know what was inside.

Manhattan is located where Hudson river spills out into the Atlantic, formerly a primary trading post for the Dutch settlement of New Amsterdam ("...it's become much too much..."). Since those days the region has transformed into the super city it is now, which is why its namesake cocktail, a chilled glass of rye sweetened with vermouth and a dash of bitters, is incongruously enjoyed best at a relaxed pace.

It seems too idyllic a beverage for the Big Apple's muscular, sharp toothed and cut-throat image: a city that will crush all those who stand still for two seconds. The city that never sleeps.

And yet, in darkened speakeasies and mahogany board rooms one can doff your hat, put your feet up and sip this ironically named beverage at one's leisure.

The drink is much more fitted to the pace of life my cousins, aunt and uncle live in the upstate, in the lush forests that line both sides of the Hudson, that spread themselves along it's rocky valleys, into the hills of the Adirondacks and abutting those black, placid lakes. 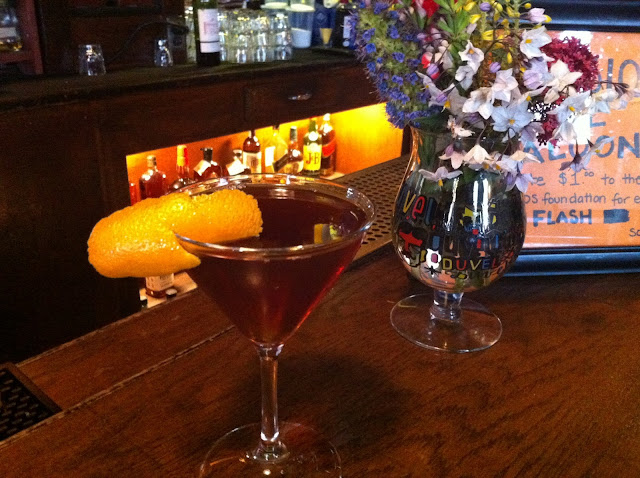 Inside my birthday parcel, as is almost every year, is the boiled down sap of thousands of maple trees. Every day from the end of January to mid-March my cousin almost single-handedly collects the sugary sap one tin bucket at a time until there is enough to boil down.

The sugar shack the the structure where a wood fire boils the sap for hours on end until it reaches the color and intensity desired: Grade-B Adirondack gold. The good stuff.

All this work still produces less than 100 gallons a year of maple syrup.

Close your eyes and attempt to hear the crunch of pristine snow beneath your feet, cold mountain air, hard limestone laden streams and the smoke of hardwood fires. Good maple syrup is not simply delicious, it is poetry in hydrocarbon form.

All my local friends and acquaintances mysteriously start showing up around April at my house, hoping I will be making waffles or pancakes. That's all very well and good, but I have a wandering mind.

Of course, Chowbacca!'s fearless leader's ruminations about the glorious Manhattan cocktail got me thinking: how great would a little maple syrup be in the drink?

The Lake George Cocktail (based on the Manhattan):
If you don't have a proper Maraschino cherry or rum-soaked cherry, skip it.

[ * A Manhattan is traditionally rye whiskey, but I suppose you can use Bourbon. Pope of Mission Hill Saloon likes Bulleit. I've had it with Knob Creek Bourbon, which is a touch dry, and I'm told the Knob Creek Rye is bone dry and smokey. Maker's Mark would likely be rather cloying. ]

The Bixby Cocktail (based on the Old Fashioned):
Muddle cherry and orange in a tumbler, cover with cracked ice. Pour in remaining liquid ingredients and stir.

Mission Hill Saloon will be serving these while supplies last. Premium rye Lake George, $12 and up, Booker's Bixby, $17 Basil Hayden's $11.