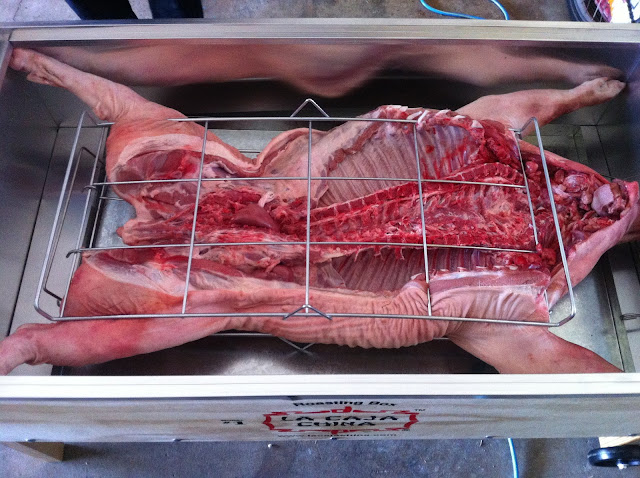 Friday afternoon before the main event and Adam and I were driving around in Noe Valley with a trunk full of ice.

How much ice? Well, the initial buy was about 50 pounds. One friend had suggested twice the weight of the pig (after butchering, about 68 pounds), or 130 pounds. Last year's porkpocalypse (Porkpocalypse I) had us filling a tub full of ice and a pig wrapped in plastic sheeting (think Dexter).

This was a mess to clean up (bleaching nearly every surface of the bathroom after slowly melting the ice down the drain).

Josh Epple, of Drewes Brother's Meats, had slung the pig over his shoulder, still conducting business over a Bluetooth receiver seemingly attached surgically to his ear. It was concealed in two large leaf bags and laid across the ice in Adam's trunk. Again, think Dexter.

"La Caja China", or China cage, is a device whose roots are traced to Cuba by way of China, so the story goes: Chinese railroad workers in Cuba would roast whole pigs in similar devices. The Cubans took note and began reproducing these roasting boxes. Ours, with it's Oriental and Cuban lineage, was made in America.

The cooking is accomplished in a manner similar to a standard cast iron Dutch oven, using a layer of charcoal spread on top of the "cage" as the heat source.

This indirect heat, plus convection, slowly roasts the meat inside.

The box was just big enough to contain our pig -- and several bags of ice - and was well insulated. A perfect alternative, I posited, to chilling the pig in the bathtub overnight.

Our guest of honor for the pig roast is of course the pig itself, weighing 68 pounds after butchering.

A whole hog, up to 50 pounds, costs $250, paid up front. Above 50 pounds the price can vary. An average of $5 or less per pound of sustainably farmed pork is a remarkable deal: sub-primal cuts, like the shoulder, can retail for $8-9 per pound, the loin can fetch as much as $11 per pound. I have seen pork ribs go as high as $10 per pound during the peak of barbeque season.

Flavoring a beast this size requires a lot of forethought, some ingenuity and in our case, a syringe.

"We could buy an inflatable pool, or we could just open up the ice and salt it with a few boxes of Kosher salt," I was thinking out loud. I was intending to give the beast an overnight brining. Other solutions in my head included rubbing the beast with salt, wrapping it, and immersing that in bags of ice.

"Nah, dude, we'll just inject it the morning-of with mojo," said Adam, having already thought it through.

I wasn't surprised - here is a man with an advanced degree, after all.

Prior to meeting me the term "mise en place" may not have been in his vernacular (it is now - I gave him my copy of The Making of a Chef by Michael Ruhlman), but planning and preparation are instinctive to him.

"Mojo" is a generic name for a variety of acid-based sauces or marinades whose primary components are acid, salt, sugar and spices. The version Adam had in mind was the bitter orange variety, typical to Mexican cooking.

As we wheeled around Smart and Final buying bulk items for the party, I gathered various components needed - orange juice, bulk spices, etcetera - before meeting Adam in an aisle containing Latin food items.

"Oh look! Let's get this," I said, holding up a bulk-sized jug of bitter orange juice.

"Nice, but why not just get this," said Adam, holding up a bottle of prepared mojo sauce located on the next shelf.

I might have made a case for preparing the sauce ourselves had I actually read the preservative- and sodium-laden ingredients, but with hours of preparation time ahead prior to the "big event", taking this shortcut was a calculated risk.

Several cups of the mixture would be injected into the meat prior to cooking.

I suspected this would not be enough, however, and after leaving Adam's house the night before the roast (and after many hours of prep work), I decided that I'd need to consult some experts.

The expert I had in mind was Pierre, a chef and caterer who happened to be tending bar at Mission Hill Saloon.

"Definitely do a rub," said Pierre as he pulled me an Anchor Steam Porter. "Salt, brown sugar, the kitchen sink."

Aye, there's the rub. I knew I had most of the component parts available in Adam's pantry - brown sugar, kosher salt, cumin, coriander, black pepper, cayenne pepper and so on.

I grabbed a few things at home that I knew Adam did not have that I wanted: powdered onion, Everglade's Seasoning (chock full 'o monosodium glutamate - natural, delicious and generally harmless to 99.99% of the population - ask Harold McGee if you don't take my word on it) and about 1/3 of a cup of smoked paprika I bought in bulk from Rainbow Grocery last year.

Mexican oregano and epazote are good additions as well.

My notes from the day of:

In just about 6 and a half hours, and untold pounds (I estimate about 70) of charcoal, the beast was ready for consumption.

This is much longer than the 3 hours that the China cage promises. The reason for this goes along these lines:


For Porkpocalypse III we will employ a remote probe thermometer. I'm hoping to do a cochinita pibil.

Roast Whole Pig:
Cook pig skin side down until a meat thermometer reads 160ºF in the thickest part of the ham.

Remove pig from cooking vessel and allow to rest for at least 30 minutes. Carry-over cooking will bring the meat up to 180-185ºF. 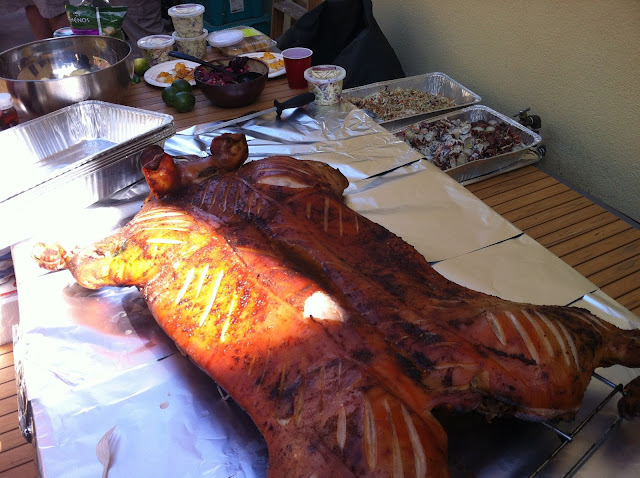 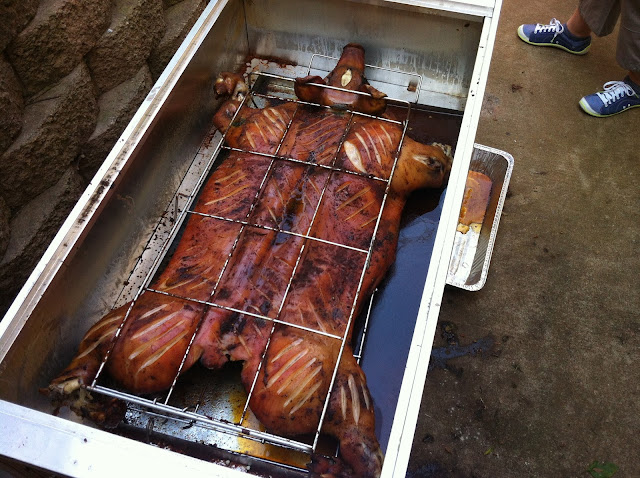 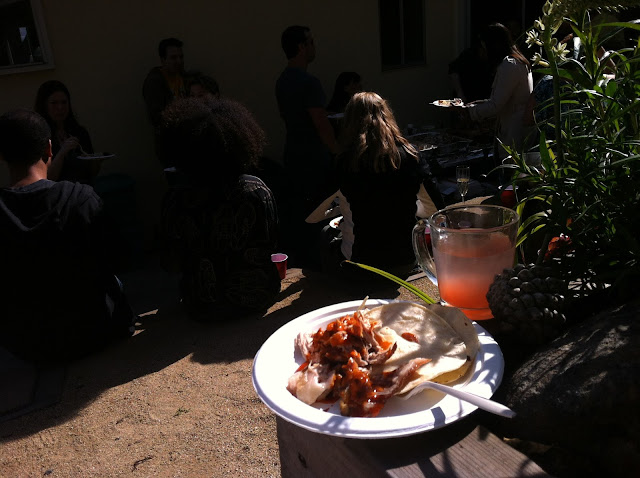 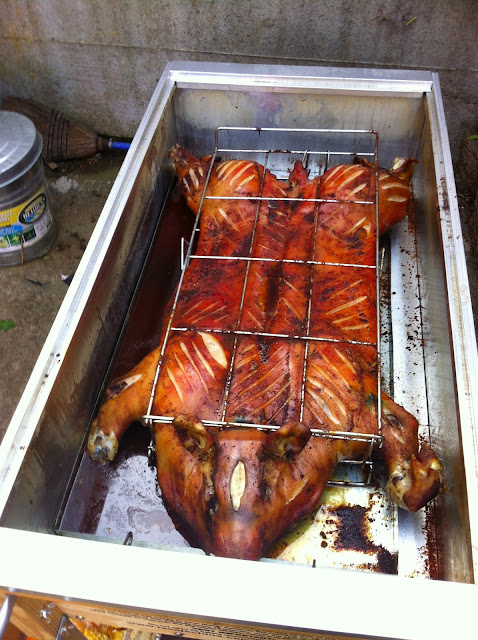 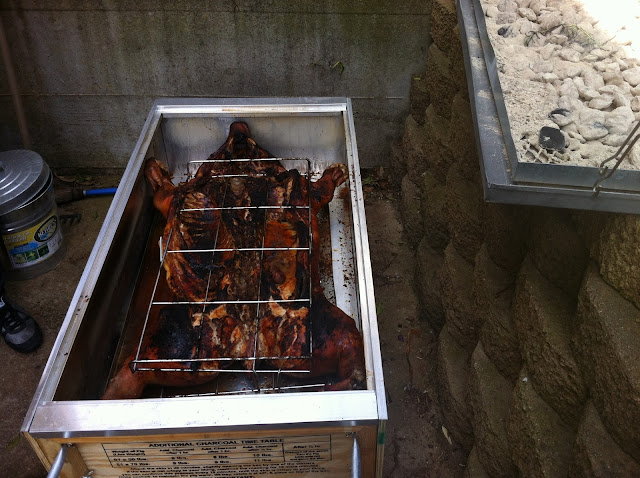 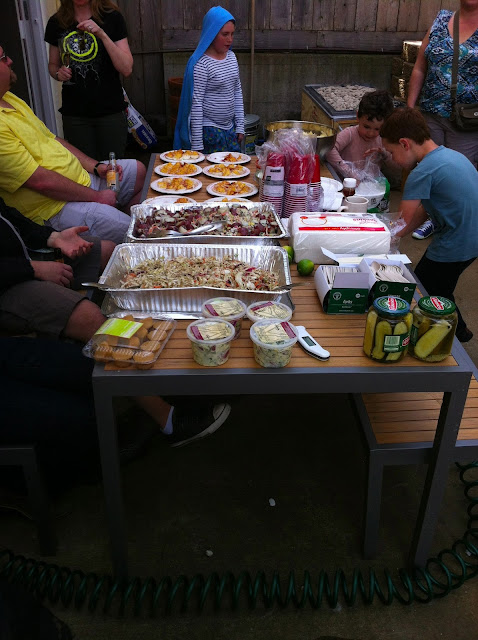 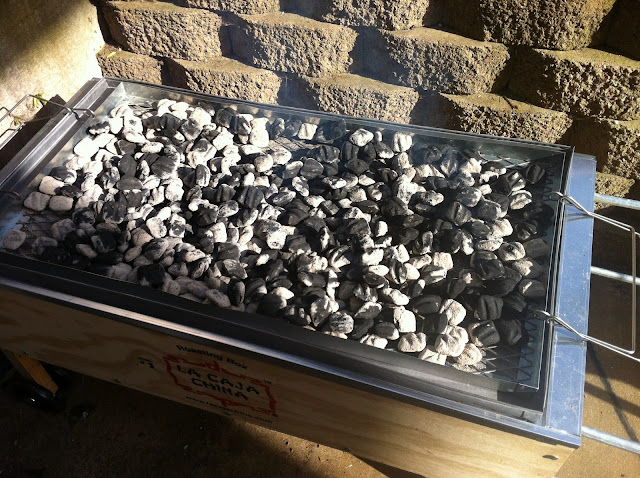 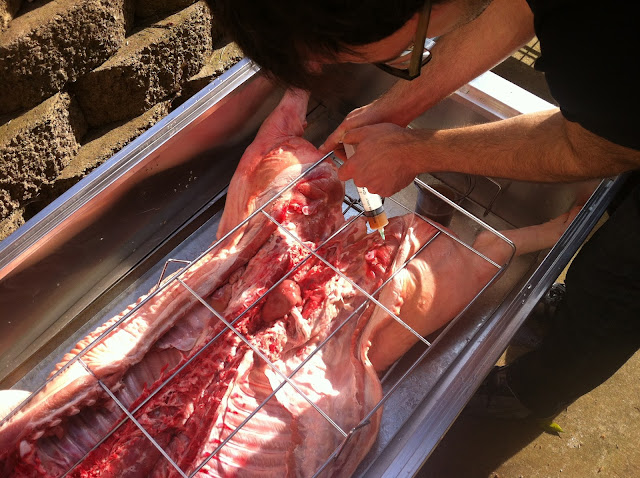 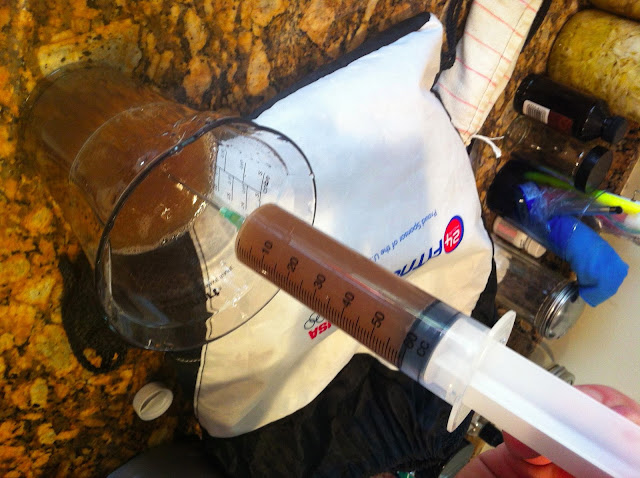 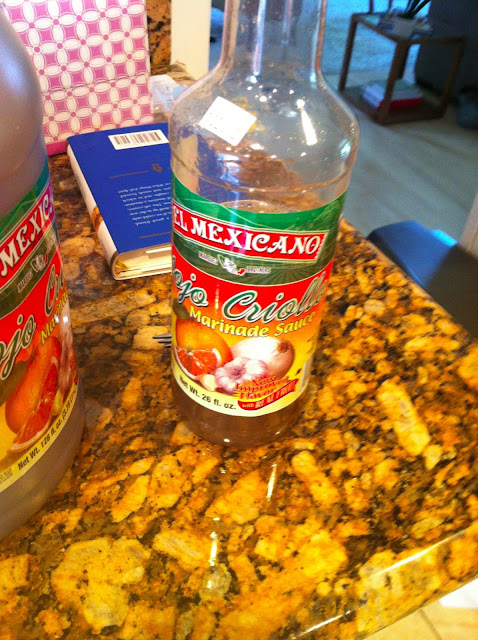 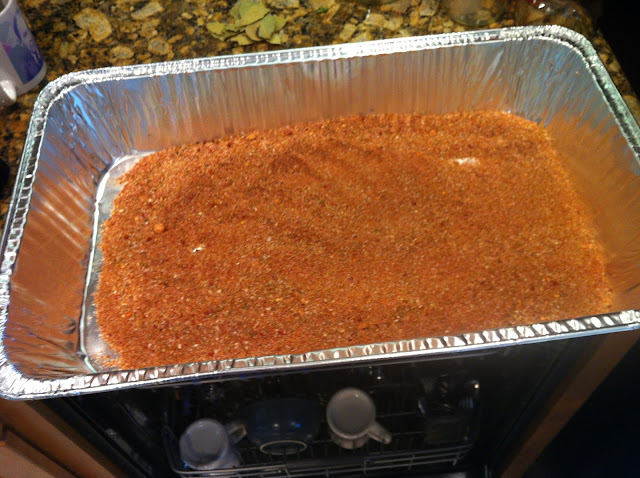