The Perplexing Puzzle of the Pink Peppercorn 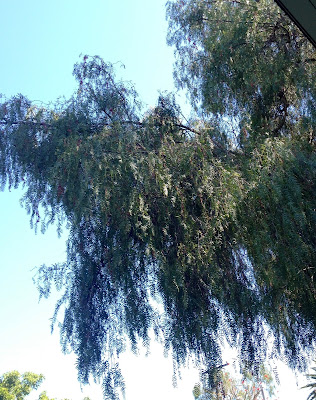 We have a "Pepper tree" in the yard. I hadn't given it much thought over the winter but now that it's covered in red/pink berries that rain down on my back deck it has my attention. Berries, eh? Can I eat them? Having a summer source of spice had appeal. I decided to do some research. 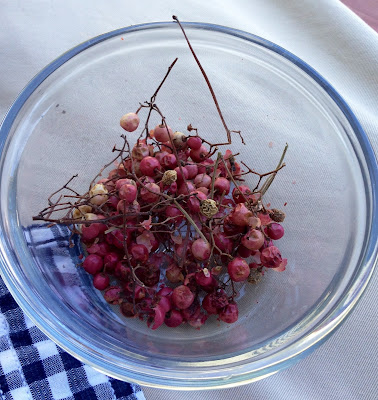 It turns out my shade and berry giving friend is a Schinus Molle, or Peruvian Pepper Tree, a.k.a. California Pepper Tree or Peppercorn Tree. You may have seen its fruit in spice stores labeled "pink peppercorns", although it is not related to true pepper at all. 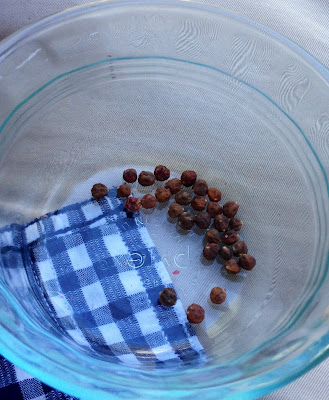 Looking a little further I found that in the 1980s cases of certain "intestinal discomforts" among small children and poison ivy-like symptoms in adults caused a temporary ban of their sale in the U.S. but French sources claimed that no such problems had been documented on their soil and the ban was lifted. The ban was even more interesting when I read that "pink peppercorns" had been mixed into other ground pepper for some time without ill effect.

So, yes. I could eat them, but not without a little risk*. Still, the risk was so small and cases long ago that I decided to try them out. These same berries, after all, had been used for culinary and medicinal purposes throughout history. 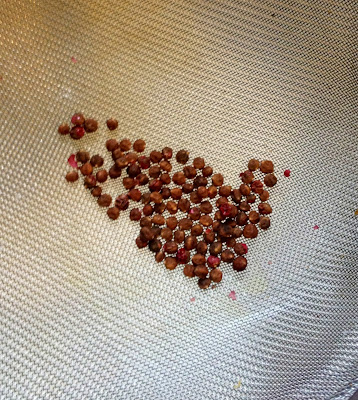 Husking the little buggers was a project. Although mostly dry on the tree, being berries they contain a bit of moisture which causes the husks to stick. They were also unevenly dry. Some berries were dry and the husks just fell off, others not so much. I dried them out in a 350 degree oven for a few minutes and the husks came away easier but there were still bits sticking to the "peppercorn". I used a strainer basket to rub off the remaining husks and wash the berries. 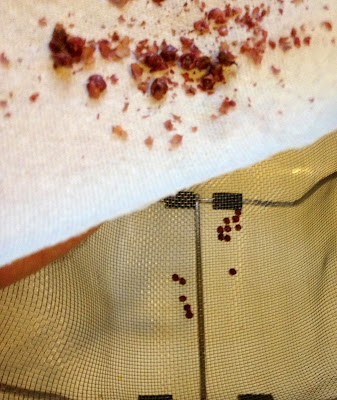 With the husks removed I repurposed a Trader Joe's Lemon Pepper grinder although I'll move them to something that grinds a little finer when I can. 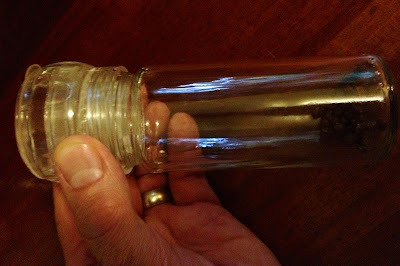 The flavor was quite peppery for a non-pepper. It also had a delightfully pleasant sweetness. I'd read that they go well with seafood. Shrimp, ho! 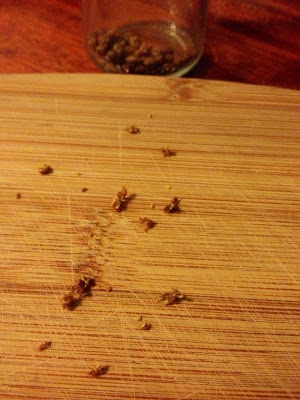 A little butter, olive oil, sweated garlic and sea salt together with ground pink peppercorns was really something.  The flavor of those little backyard berries made a great snack special. Can the flavor of a peppery non-pepper be considered rich? The mouth feel was certainly rich. 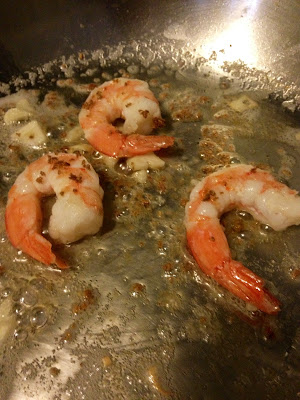 So far the only effects of the berries have been the production of delicious memories and thoughts of uses to come. I'll give it a full 24 hours to be sure but I'm already planning on husking and drying a good supply over the Summer to have stock through the coming Winter. I'm also willing to call this food experiment a flavorful success. The back yard just keeps on giving. I can't wait to try the non-pepper on some trout and some greens. I also hear they're great in preserved Meyer lemons.