Skip to main content
Labels
Posted by Dottore Gus May 30, 2013 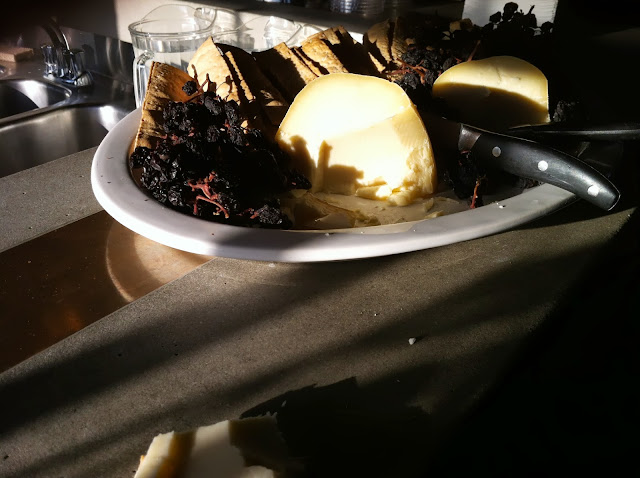 True story: I have not yet read Cooked.

The latest Michael Pollan book is on order, but I know somewhat to expect.

Unlike myself Pollan is a trained, professional writer. That he has chosen to write several books on the subject of food, most notably The Omnivore's Dilemma, does not make Pollan a food writer per se. However Pollan's talents at exposition and delivery of narrative pertaining to the subject of food and cooking elevates his writing to my top ten list: populated by Michael Ruhlman, Anthony Bourdain and of course Julia Child and James Beard - the top slot occupied by M. F. K. Fisher.

"The Omnivore's Dilemma" is non-fiction that reads like a novel, Pollan being the main character speaking in first person as he explores the world of food cultivation.

In "Cooked" he deigns to bring that same exploration to his own kitchen. Here the differences between he and Ruhlman are writ apparent: Pollan is not a cook and more importantly is not immersed "chef culture" they way Ruhlman is. For many this will likely be a fresh perspective. Ruhlman's writings are frequently voyeuristic: few readers will don a chef's jacket, work a hot line, pick herbs with Thomas Keller or even cure their own bacon. Curing bacon is a task that many Americans are unfamiliar with.

Hopefully nearly anyone can master as Pollan does a few universal techniques for their home kitchen. In fairness to Ruhlman, the end goal of his books are to bring the lofty (the craft of charcuterie, the herb gardens of Alice Waters and Keller) into the realm of the everyday. And of course, Ruhlman's subject, Chef Michael Symon, is the approachable everyman.

In writing about fundamental cooking, elemental even, Pollan brings the reader into the world of BBQ pit masters, the stew pots of ethnic mothers and grand mothers, into the space between the dough in the baker's bread (like the notes unplayed on Miles Davis' horn) and sheds light on the magical alchemy of the brewers, fermenters, tinkerers with cheese, vinegar, kombucha and distillation. This last group Pollan dubs "fermentos"*.

A great many tasks that were once de rigeur for cooks everywhere are now foreign to the home cook: milking an animal, churning butter, milling grain, killing and dressing game or chickens, harvesting eggs.

The modern American has neither time nor inclination for it, seemingly.


In 1984 we made 72 percent of our dinners from scratch, but by 2008 that number dropped to 57 percent. What will happen with cooking in the future?

Just like there still are people who make quilts, there will be people who will cook. But like what happened in the last 25 years, it’s going to go down. Not in my lifetime, but it’ll eventually go to zero…

So says industry analyst Harry Balzer, who tracks the eating patterns of Americans. That cooking at home will someday fade into obscurity sounds absurd on it's face to those of us who write (and read) food blogs - an audible gasp, followed by nervous laughter could be heard as Pollan read this quote aloud. After all, at least two national cable networks are (in theory) dedicated to cooking. Yet increasingly cooking is becoming a pass-time for the affluent, and frighteningly there may be a great deal of truth to Balzer's analysis.

Having not yet read "Cooked" I hope this is a subject Pollan touches on: class inequality and diet. Fast Food Nation and even "The Omnivore's Dilemma" touch upon the topic. Our post-World War II safety net of secure, life-long jobs, pensions and labor unions have eroded to the point where an ever growing percentage of the population has less money to spend on food stuff and even less time to spend preparing it.

Subsidized junk-food delivered in the form of fast food and TV dinners are part and parcel of the average American diet. Cooking at home has become a luxury.

[ * Apparently this nomenclature escaped me since I know many people fitting the bill, including myself, who have never heard the term "fermento". ] 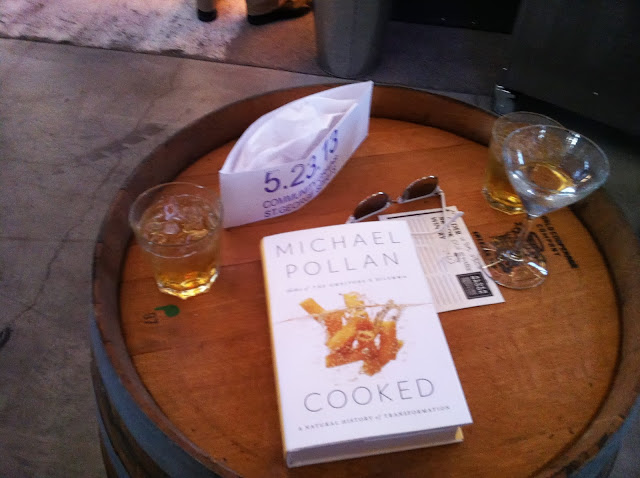 These are all subjects near and dear to our hearts, and as good of a starting point for the amateur or novice chef as any (in addition to being an effective literary device).

Locally made aged cheese and raisons, whole wheat yeasted crackers, a "bourbon" (by way of Alameda county) punch, ginger beer, Terroir Gin bee "Pollan" martini (a cocktail whose origins trace back to nearby Martinez according to the canon), natural hot dogs atop whole wheat buns with local mustard and kimchee, a white bean and garden vegetable soup one might encounter at Chez Panisse and finally ice cream from Bi-Rite. 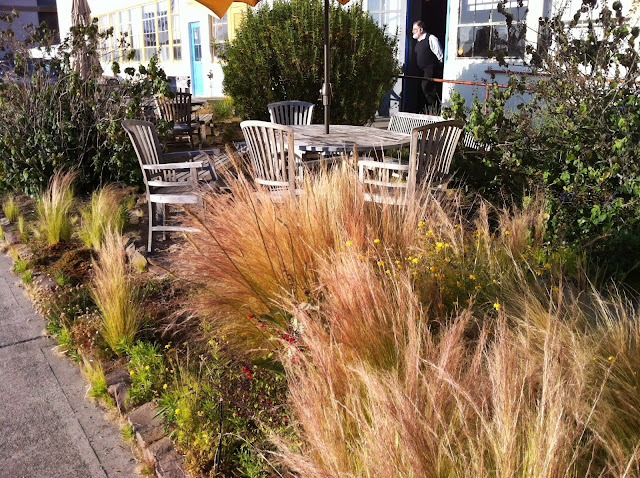 I don't know if there's evidence to support Balzer's claim that cooking will someday become a relic of the past. I hope Balzer is wrong, just as Egon Spengler was wrong in 1984 we he declared "print is dead."

It may be the age of the tablet and the smart phone, but when Michael Pollan write (real books, printed on trees!) they fly off the shelf.

If for Pollan his kitchen is a last unexplored frontier it is for many of us the heart and nerve center of our homes, apartments and communities. Perhaps some future version of human will totally abandon their kitchens ... out of  some dystopian necessity or other unthinkable cause ... it is a humanity I do not want to contemplate.

Maybe that is just the gin talking.

Chowbacca! looks forward to reading the book, and we will definitely share our thoughts.

Cooked: A Natural History of Transformation
by Michael Pollan - http://michaelpollan.com/

Chez Panisse
Temporarily closed at time of writing due to fire.