Skip to main content
Labels
Posted by Dottore Gus May 19, 2013

Some weeks ago I made "drunk plans with friends"* to go vinyl shopping on a recent Saturday having resurrected the house turntable using a rubber band and a dime to weigh down the cartridge. I've always been an electronics hacker ever since Spielberg teased every kid in my generation with the Speak & Spell that could talk to aliens in E.T. The Extraterrestrial.

To the great dismay of all of our parents. Of course, my father had other ideas, and soon I was not only repairing electronics that had "gone under the knife" but building radios and primitive circuit boards ("bread boards" as they were called).

That's how I came to know the Deth Vegetable who was a central figure in the early 1990s Boston hacker scene. We would meet monthly in a pizza parlor overlooking Battle Street and Harvard Square for 2600 meetings, sponsored by the magazine of the same name. Aprés meetings we would often descend on Newbury Comics or one of several great local record stores (like the gone but not forgotten Second Coming Records between Harvard and Central Square).

Death Veggie joined me first for the gym and later after we had scurried to our respective homes and showered, brunch at the Alembic then Amoeba. That's where I found this awesome Jeffrey Osbourne album that I picked up for my other comrade-in-hacking, Invalid Media:

[ * "Drunk plans with friends" meaning you make up a plan in a bar after a few drinks, wherein half or more will forget or bail for some reason. ]

I extricated myself about about a half an hour later having spent less than $100. I found a patch of sidewalk to stand and watch panhandlers, gutter punks, tourists and shoppers mill about on Haight street.

Some indeterminate time later Veggie came out of the record store with two very large crates.

And they say people like us don't buy music.

"Hey dude, you want to stop by the Russian deli?" asked Veggie, loading into his 1979 diesel Mercedes, a car large enough to support his comic-book super villain frame.

Game on. Pickled herring, I'm coming for you. 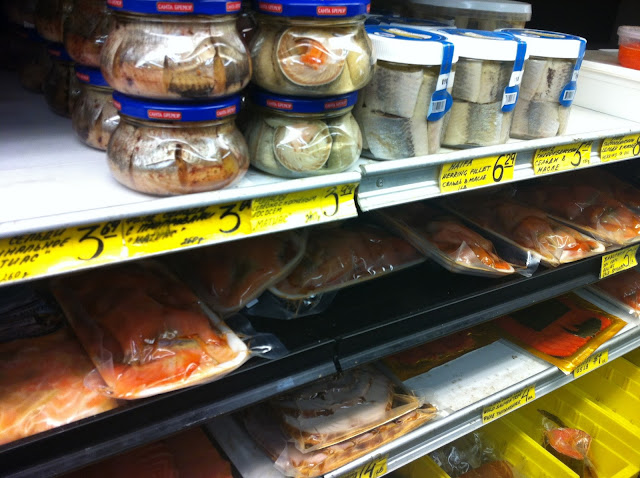 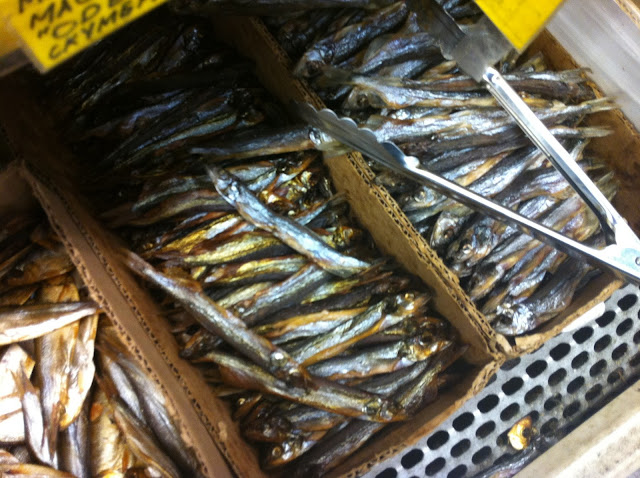 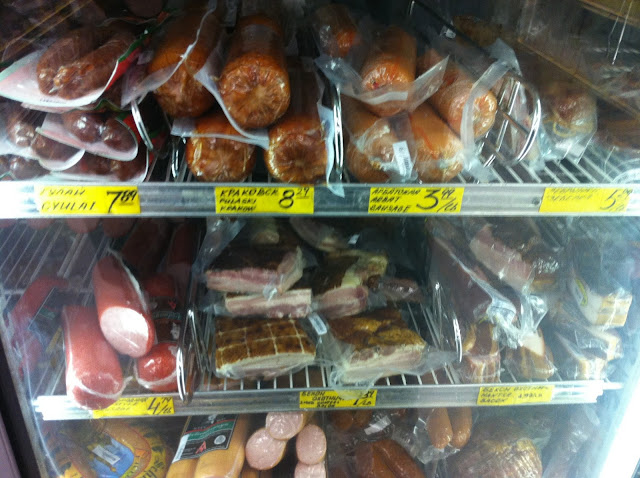 Russian was the primary spoken language throughout the store, the man at the register dropped right into English when he saw me, thankfully, since what Russian I do speak is too vulgar to share in mixed company. Some of my friends seem to have an ear for the language, I've learned to tune it out: generally if Russian is being spoken around me by my friends I assume it is at my expense.


As I was checking out I noticed Veggie was wearing a vintage USSR (CCCP) Olympic hockey team tee-shirt. He didn't realize that until he got into the car. Oops!


I left with some items familiar and some not. Salmon roe (labeled "ikura", the Japanese name, as well as the Russian equivalent in Cyrillic) for $30/lb, smoked herring, canned smelt, Ukrainian sour cabbage (which is district from German sauerkraut by adding shredded turnips and currants), pickled tomatoes and meat pelmenis were all items I have encountered. I rolled the dice on some Ukrainian pastrami and "rib bacon", double-smoked bone-in pork back.

Having blown my budget on LPs (which I would gladly list here if I knew it wouldn't bring down editorial brimstone upon my head), there were a lot of items that I didn't pick up at Europa Plus that I would have liked to.

So stay tuned as we will continue our adventures into this Western frontier of San Francisco's pastiche of culinary options.

When I got home I immediately toasted up some black bread (from the captivating red head at the bakery down the road), added a nice pat of butter and a generous dollop of salmon roe. 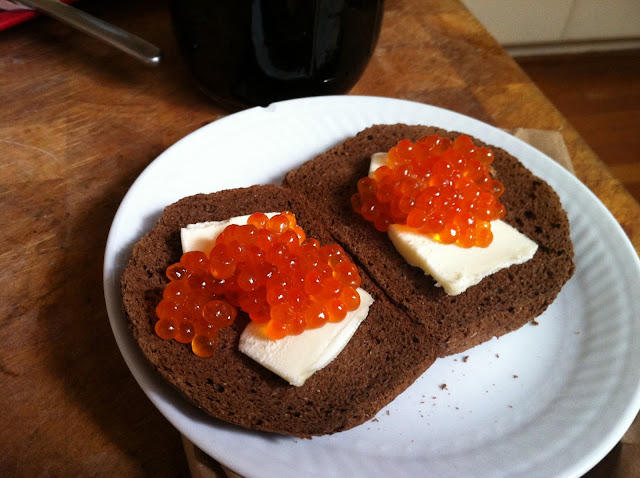