The FBI. In Color. 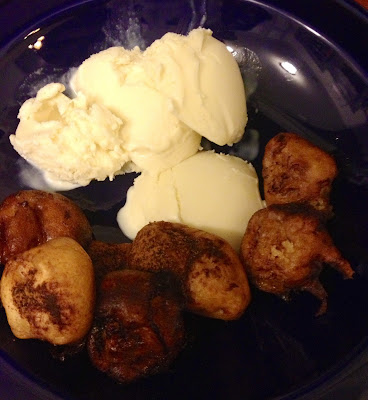 One of my favorite SF Thai places, in their heyday, had a combo that couldn't miss with me. Duck in yellow curry and the old FBI: Fried bananas and ice cream. Recently I'd wanted to recreate the fried banana and ice cream part for the Wee Wonder but the recipes I saw seemed perhaps more authentic but too complicated. There had been something simpler about the flavor that I had remembered.

Then it hit me. Pancakes. It was pancake batter that those bananas were fried in. A quick Google and sure enough, there were recipes for FBI with pancake batter and cinnamon. I tried it out and it worked.

Cinnamon, by the way, is great in pancakes too.

To make fried bananas yourself just make pancake batter, from scratch or a box, stir in some cinnamon, and cut up a banana into one-inch-ish chunks. Heat oil to 350 degrees. I used a combination of peanut, coconut and canola. Dip the banana into the batter and coat. Then dip the banana chunks a couple at a time into the oil. Pull them out quickly to avoid overcooking and place on a towel to drain off some oil. Serve while hot with ice cream.

The ice cream that I'd had on hand was vanilla but coconut would be even better. I might try messing with the seasoning in the coating too. How might nutmeg be? Or five spice powder?

I'll try the more traditional version some day, but for now it's quite a treat. Now I have to try and duplicate that yellow curry duck. 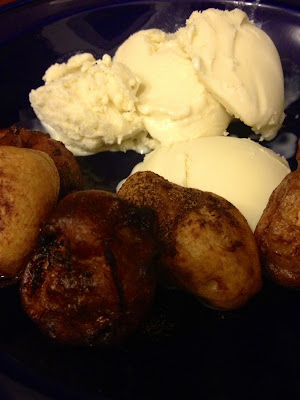