Fourth draft. Writer's block. Actually, more like writer's "I don't know what to say, but I'll write several paragraphs of it anyway then delete the whole thing."

Where am I? West shore of Lake Tahoe.

Why? A number of reasons. First, my friends got married recently, he has a cabin in Tahoe he bought years ago, she's suffering from San Francisco fatigue. She gave up her Mission apartment and left San Francisco behind.

This is a thought that often crosses my mind.

"San Francisco is the most beautiful city in America," my dad is fond of saying. I would later learn that San Francisco was on his short list of cities my father considered in 1969, a freshly minted juris doctor. Whatever city he chose, he would put down roots, start a family and a career. The short list had two cities in contention.

San Francisco... or Cleveland? Well, that's not much of a choice.

In an alternate universe, I could have been "born and raised" in San Francisco. I probably would have had a goatee, too.

Do you know the old joke? Q: How do you tell if a person is vegan? A: Don't worry, they'll tell you.

People from San Francisco are the same. They are proud (too proud?) of their city. Newcomers like me have flooded the city, disturbing its equilibrium. The natives feel like they are under siege.

"I was born and raised here," is a boast I can forgive. But to hear some natives tell it, there is no better place on earth.

I beg to differ.

San Francisco is a beautiful city. It is the most beautiful city in America, even. But if you look too close, you begin to see the cracks and the blemishes.

I've lived here for 16 years, it is my adopted home, and I love it. My perspective is different than my father's, who is always a tourist.

And so, like Neil Young, I'm going out for the weekend. Eastbound and up and up and up, 6,225 feet above sea level, to Lake Tahoe. 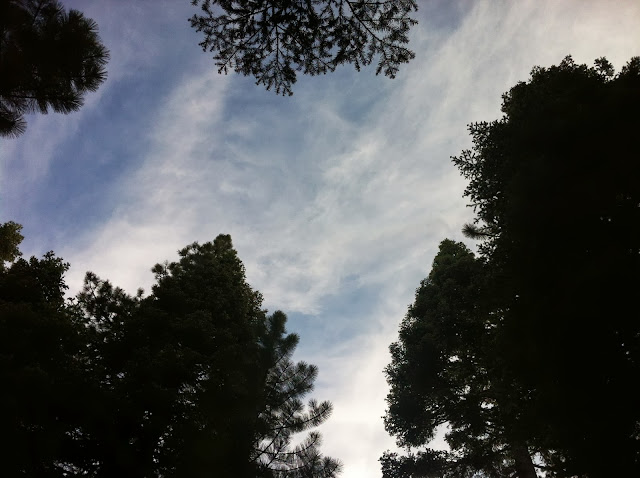 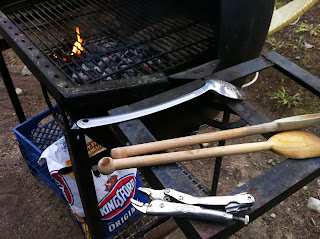 In the shuffle of moving from city to city, things will get lost.

A good cook makes due with what is on hand. This is called "system D". 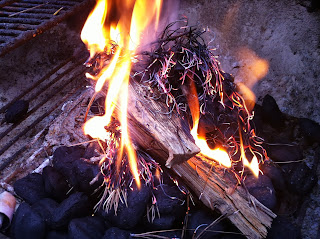 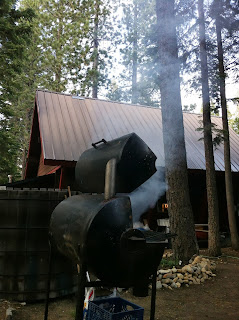 A Weekend Grill In the Mountains:
Your grill should have a pile of coals to one side (hot side) that are white-hot. You will know the coals are hot enough when you feel intolerable heat holding you hand over the grills. The coals will have turned to ash and be glowing orange.

Place the potatoes on indirect heat while you prepare everything else.

Start the corn next, searing on all side (in the husk) over direct heat. Move to indirect heat.

Grill the asparagus over direct heat until charred to your liking (I like mine to just start to go limp). Arrange on a serving plate. 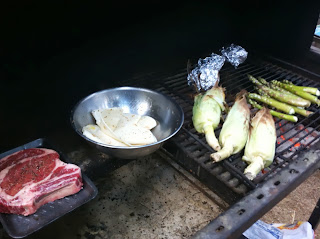 Give the potatoes a brief walk over direct heat to char up the skin, maybe a minute per side.

Pop oven a nice bottle of wine and tuck in. 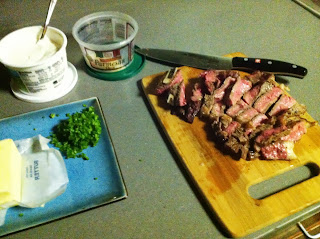 I love San Francisco and it is my home.

I never thought of the place I was born as anything to be embarrassed of until I left. "Oh, you're from Cleveland," people chide. I didn't become embarrassed, I became defensive.

Cleveland is not a "cow town."

Our lake did not catch on fire (it was the Cuyahoga River, and you can all thank Cleveland and then Congressperson Dennis Kucinich for the "Clean Water Act" and the Environmental Protection Agency).

We are not bumpkins, we are not rubes.

We have a world class art museum, beautiful public parks, the Rock and Roll Hall of Fame, a brand-spanking new Museum of Contemporary Art, some of the best public and private schools in the nation and the Cleveland Orchestra ("the best band in the land").

My father chose to raise us in Shaker Heights because they voluntarily integrated their public school system way before most other schools did, and before it was compulsory. Because in 1969, it was one of the top ten public school districts in the nation. We would be near his mother, my grandmother, and my mother's parents.

So, the choice was obvious. Cleveland.