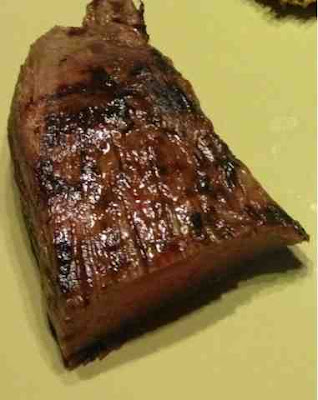 When my dad was alive we only ever agreed on two things: Seinfeld is funny and steak is great. Although, he and I loved steak differently.

Dad loved a T-Bone burned beyond recognition. If anyone brought him anything different he would complain about the cut or ask that it be returned to the grill.

A T-Bone, well done, that's what he'd order at the steak house with the leather booths out by the airport. It was all that I'd known of steak as a kid. After dinner he'd drive us down to the runway fence to watch planes, to and from somewhere, performing their magic in the air.

Those are some of the earliest memories I have of my dad. As I left home, and started seeing other steaks in my own favorite leather booths, I found my cut of choice in a rare dry-aged rib eye. While that is my preference to this day I have been known to enjoy other cuts of cow. Looking back on those well done T-Bones ... heh ... "well" done is open for debate. Seinfeld is still funny. Air travel still seems like magic. My taste in steak has moved on.

Inspired by Ol' Doc Gus I've been trying out different ways of preparing flank steak. I've had a lot of success with various dry rubs and marinades. The cut holds a good amount of flavor if you find the key to let it out.

Now, I don't want to drive the price up on this affordable steak, but I've found the key. The traditional method of beating flank steak with a hammer to tenderize it is forcing the lock. Instead, I brine it.

Brining tenderizes the meat, releases more flavor and keeps it from drying out on the grill. I brine all of the meat that I cook. There'll be more on that in an upcoming post. For flank steak, it makes an inexpensive cut of meat taste pricier.

It was good with just a simple brine of rosemary and garlic, but I decided to give it a leg up by marinating it. Most of the marinades were quite good, but the winner appears below. It's a steak paired with a Manhattan cocktail in the most intimate way, and my gift to steak-loving dads everywhere for Father's Day.

Step One: Brine a hunk of flank steak for two hours. Two tablespoons of salt to one cup of water.

Note: If you'd like it a little salty, leave in a quarter cup of the brine with the marinade. I tried this one night. It was quite good, like a beef pretzel, though I prefer the original preparation.

Don't use the good bourbon or vermouth. It won't make a noticable difference. I used Trader Joe's bourbon and their four buck vermouth and it worked great. 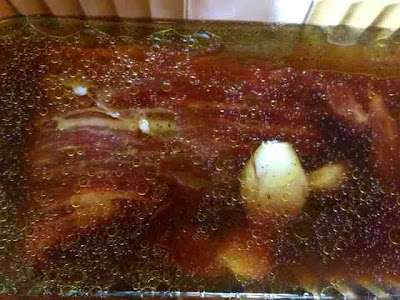 Step Three: Pull the marinated steak out and slap it on the grill or a grill pan and cook to whatever your dad considers done. Remember that it's a thin cut and cooks quickly. 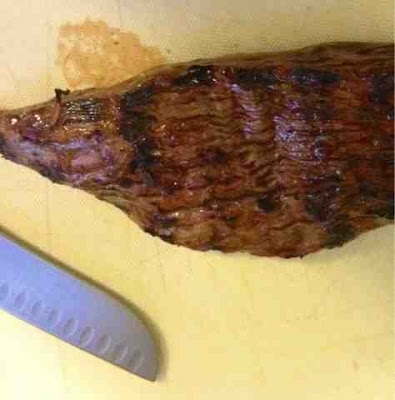 No lie, this is one delicious piece of meat. It's tender, juicy, and has a great flavor. My dad would hate it. Try it with a cocktail, and have a happy Father's Day.
Email Post
Labels: Brine Father's Day Flank Steak Marinade steak