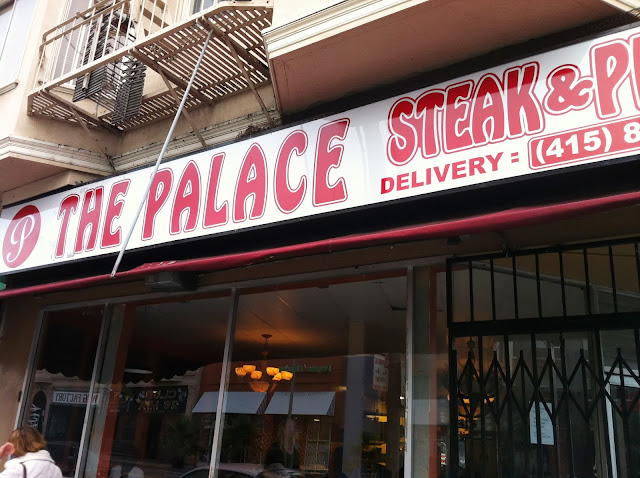 A new face on an old favorite.

The last time I had been to the Palace Family Steak House (on the northeast corner of Mission and Cesar Chavez in San Francisco) it had reopened under new ownership. Gone were the red and brick colored walls covered in posters and knick-knacks curated carefully over decades by the original owners. Gone were the Christmas lights. The fun was gone, replaced with white painted walls and florescent lighting humming at a barely perceivable buzz. Remaining were 1960s diner tables, chrome trimmed and plastic coated, and chairs. The prices were more or less the same: steak dinner, with a potato and a salad for under $15. Gone was the home-made ranch dressing that made the cheap iceberg lettuce really pop. The menu had some new additions: Greek and Lebanese kabobs, hummus, falafel, Turkish desserts. The new owners proudly up-sold their native ethnic food. But those walls, those too too white walls and that humming...

My first and only trip to the original Palace Family Steak House was during it's closing weeks. Moe and Marina, the couple who had run the steak house for 40 years, were retiring. Urgency moved me out of inertia ("...I've always wanted to check that place out..."). I'm glad I went.

I'm also glad that one of our friends did not eat beef or I would not have experienced the divine beauty of their fried chicken. Who knew one of the best things on the menu of a budget steak house would be the fried chicken? It was some of the best friend chicken I've ever had,  I still have dreams about it.

Next month, it was shuttered. An original, gone for good, joining the other stars in the constellation of gone but not forgotten gems. Hidden behind the fog. Karl, the fog.

"The Palace Family Steakhouse" is that band's eponymous theme song, although PFSH hasn't played a gig in over a year. Maybe they will come out of retirement for the re-opening?

"Dude!" Even though I was reading the words in IRC I could almost feel Deth Veggie pushing the air out of his tremendous lungs at me. IRC is the chat client of the Gen X hacker élite, an artifact of the 1980s and 1990s.

"Dude!!" Veggie would not be ignored. "They're reopening the Palace Family Steakhouse!" (I'm trimming several exclamation points, because, editing.)

Well, that was something to make me raise an eyebrow.

"The PFSH, you say?" I asked, using their common acronym; verily I am "down" with the "lingo".

"Yes! This Saturday is the cold open, you have to go."

This was a prix fixe event and was apparently invite-only. Regardless, Veggie was able to charm his way in with his original Palace Family Restaurant (the band) tee-shirt, quick wit and the fact that he is 9 feet tall and resembles a comic book villain (wouldn't hurt a fly, although, don't let looks fool you).

He went, he ate, and he managed to get another invite to another cold-open the following Wednesday, a day I could, and did, attend.


I rolled up on a chilly, foggy Wednesday evening delighted to see that the façade of the Palace had barely changed. Chef Manny Torres Gimenez and wife, general manager Katerina are choosing to call their version "The Palace". The outside remains unchanged as it has for decades - white trimmed, green painted stucco with a brick colored awning. The husband and wife team have been busy modernizing the interior. Splashes of color now accent the white walls, adornments meant to evoke the late 1960s pop sensibility. Austin Powers without being too Austin Powers. I could dig it.

If there was a printed menu, I did not see one. I am told there are a' la carte options, but I opted for the five course prix fixe, $50. For $20 more you can get the "kobe" option.

People, when will you stop calling wagyu beef "kobe"? Kobe beef is from Kobe, in Japan.

...And a Martini is made with gin. Only. 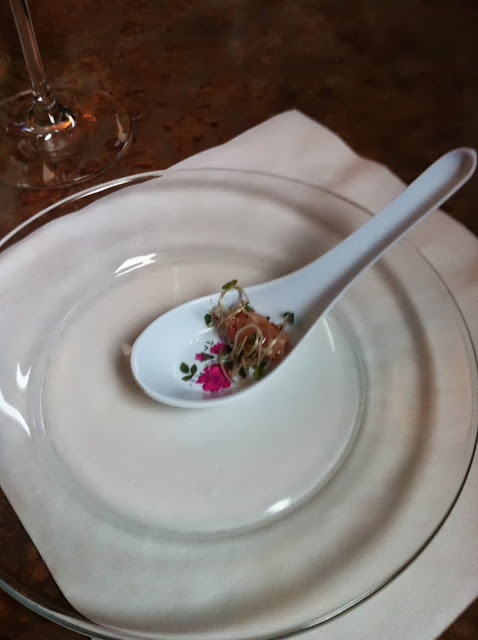 Amuse Bouche - a bite of hamachi with lime zest and ginger sprouts.

The object of an amuse bouche is to tease the palette, and tease it did. This bite-sized morsel left me wanting more.

As they say on the original Iron Chef, "a very successful dish". It did remind me a bit of spring. 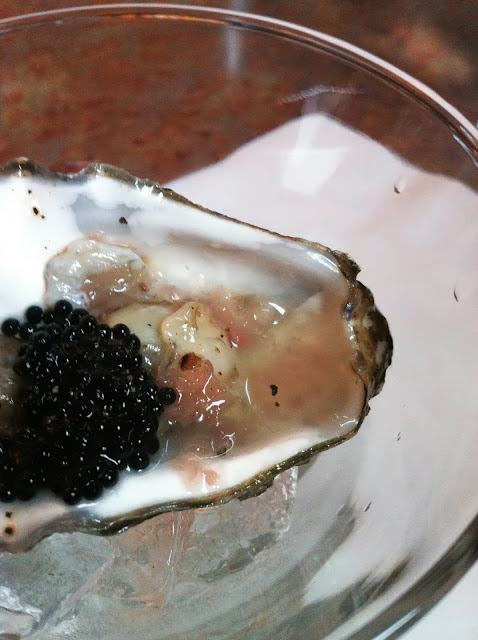 The shallot had nice tang, an obvious homage to the mignonette. I also tasted a hint of dill, bright and herbal. Would have loved 23 more of them! 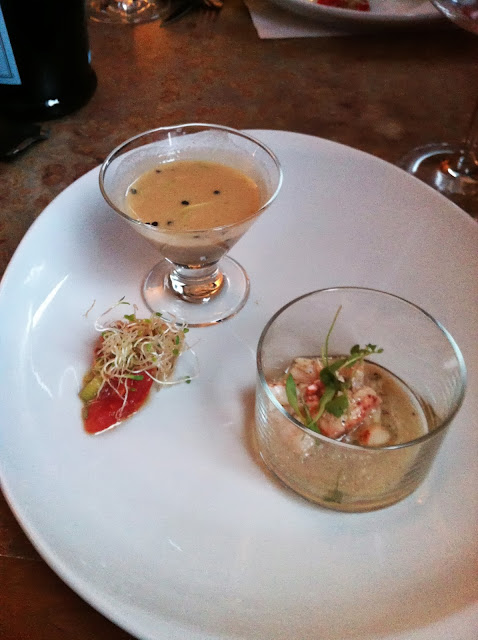 This was a very elegant touch for a $50 prix fixe (think about it, $10 a course). A briny lobster bisque with onion sprouts; a ceviche with cilantro sprouts featuring lobster claw meat; lobster tail meat roasted with bean sprouts. 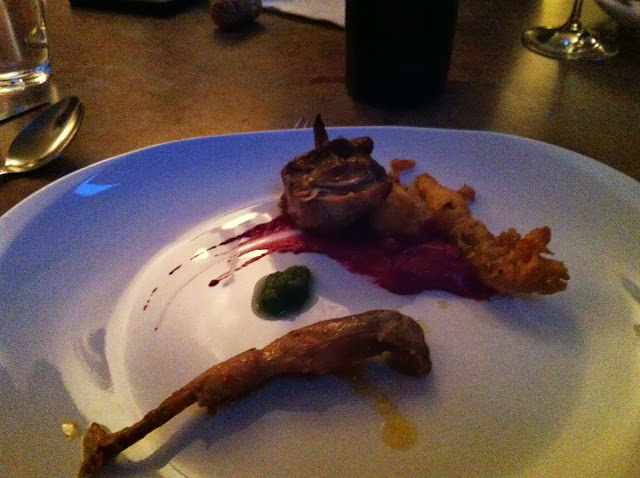 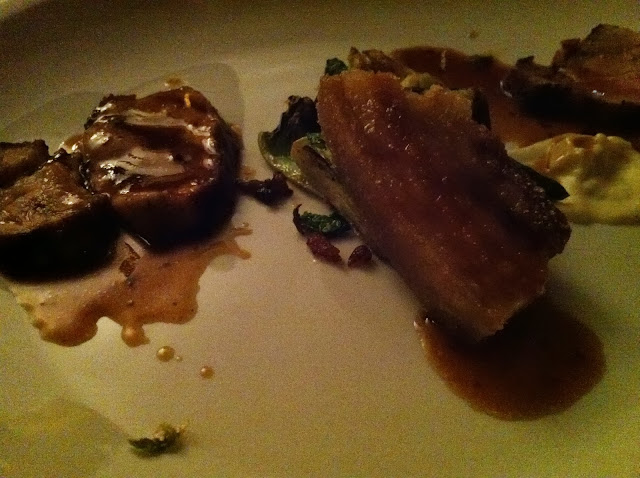 I thought this was a touch salty, and I like salt. Overall, this was the biggest single flaw for the whole meal. 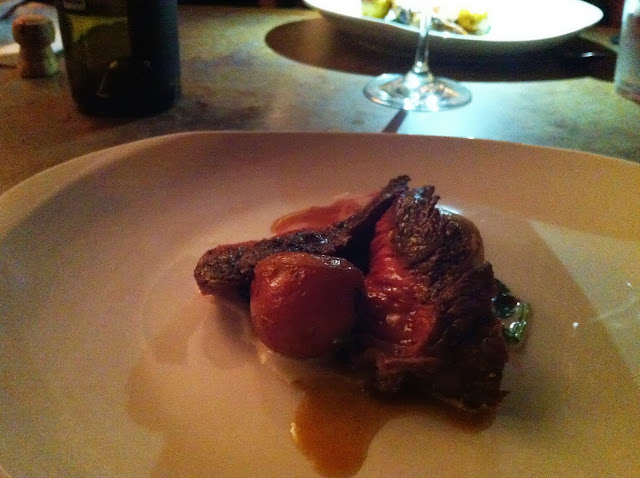 This is a bold choice, an oft-neglected cut - not one often associated with fine dining. This humble, lean cut was prepared perfectly rare. The meat was skillfully sliced across the long grain of the muscle turning otherwise shoe-leather into soft, moist meat. Delicious. 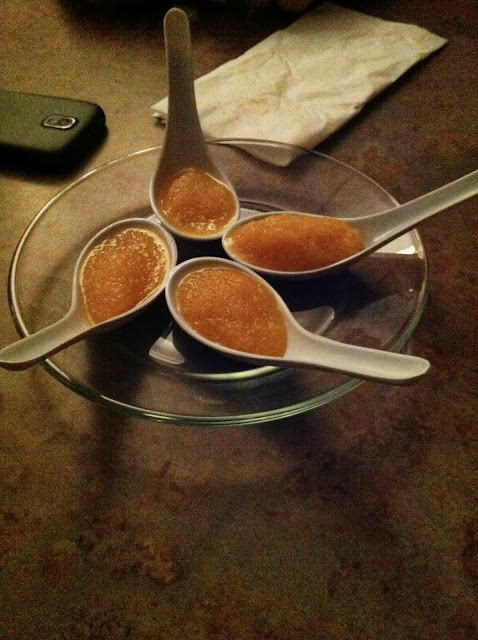 Manny Torres Gimenez is taking over "The Palace" after stints in several well-respected San Francisco restaurants: SPQR, Quince and Coi. In addition, he's been running successful pop-ups in Mr. Pollo and Roxy's Cafe (although not without controversy - Chef Gimenez reportedly split from Pollo owner Angel Vaca over a rent hike and accusations that Vaca absconded with Gimenez's recipes; a common allegation in the industry).

Chef Gimenez is Venezuelan, and his food frequently pays homage to his heritage.

His wife Katerina, Lithuanian-Russian, is the general manager. During the cold opening she also doubled as the restaurant's only server.

The couple is joined by Sous Chef Shawn Naputi, formerly of Incanto.

The Palace staff in action, plus the worst dinner conversation ever.