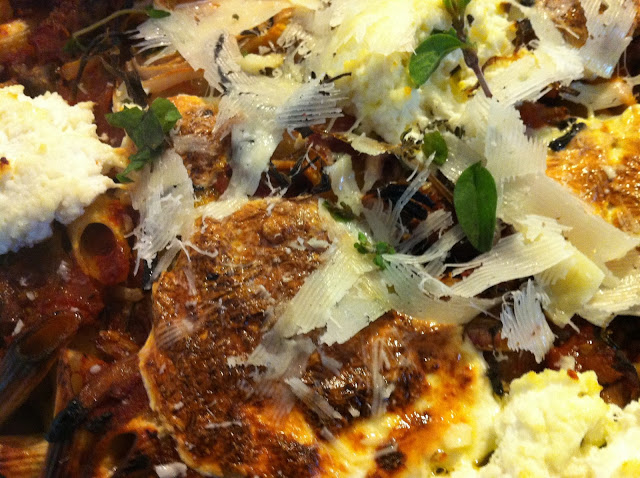 I think I said it best the first time, so I won't try to edit it: 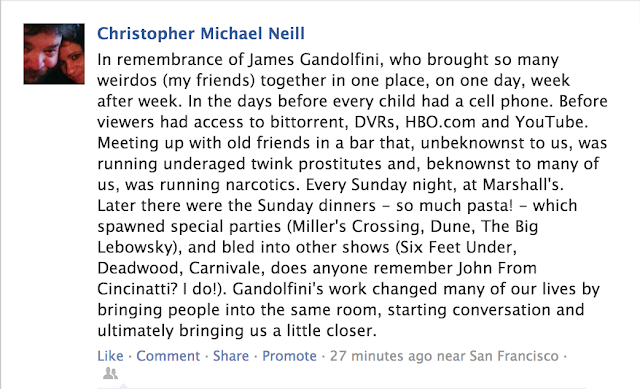 It was Cleveland, in the late 1990s. We'd cross town to various people's houses to watch the Sopranos. A bar was famous for showing the Sopranos every Sunday night - myself and Chowbacca! masthead and fearless leader Larry frequently made the trip (through snow and freezing rain sometimes), as neither of us had cable. I'd order a heavy pour of Maker's Mark on the rocks, Larry would order Jameson.

The bar would fall silent for an hour (any violators would be glared at, or possibly worse).

Later, that same bar would become famous because an enraged parent drove a truck through the front window when they discovered their run away teenager had been turning tricks in a secret basement sex dungeon we were unaware of (we were aware of some of the other unseemly activity going on at the bar, but that was just run of the mill loan sharking and cocaine dealing). For the first time, I bought (e.g., didn't steal) cable. That bar, now forever closed, was replaced by my living room. I'd buy a bottle of Jameson and a bottle of Maker's Mark. My friends would take turns cooking "red-checker tablecloth Italian": spaghetti and meatballs, baked ziti, lasagna, sausage and peppers. 99% Bittersweet would sometimes join the fun. Then the San Francisco diaspora began around March of 2000.

Eventually Larry warmed up to the Maker's Mark, simplifying the beverage calculus and leaving room for more creativity when it came to food. We would make weekly trips to the Ferry Plaza Farmer's Market, temporarily a refugee of reconstruction, located in a parking lot near where I worked. We were now in San Francisco full time, and we needed new friends. The lure of the Sopranos and home cooked food made us popular quickly (well, and our good looks, quick wit, charm and most of all humility).

[ ETA: I had actually warmed up to Makers years before when Brian at the Turkey Ridge introduced us. -LMj ]

Soon the whole gang was back together on the West coast - the locals were skeptical ("...what's with all these Clevelanders?"), but we could cook, we could drink, we were fun and we proved to be steadfast and loyal friends to the natives and to our adopted home. Food tied everything together.

So it is with that in mind that I raise a glass of Chianti Classico affectionately to the stars in honor of Mr. Gandolfini, who brought so many of my friends together.

Of course, what good would any show about Italian mobsters (and psychiatrists, and overbearing mothers, and impromptu fishing trips where one person doesn't come back to shore) be without lots of loving references to food?

What did we learn? In Czech Republic they like sausage too. Mesquite makes the sausage taste peculiar. The family matriarch is famous for her baked ziti, and for sucking the joy out of every room.

Tragically real life took the wonderful Nancy Marchand from us long before matricidal sociopath Anthony Soprano could liberate himself from his mother, Livia.

Side-plots involving Tony's lifelong friend (and symbolic stand-in for Tony-as-civilian, spineless and passive aggressive; but hard working and passionate) Artie Bucco were rich for homages to cinema's love affair with food from La Dulce Vita to The Cook, The Thief, His Wife & Her Lover and of course Big Night.

When David Chase wasn't making us squirm in our seats, or pondering our relationships with our parents, or second-guessing our suppressed homicidal yearnings, he was always making us think of food in a series where characters quite literally would eat the scenery week over week.

Post your favorite recipes in response. Go out and make them, and invite your friends and loved ones. Life is short, make it sweet.

Cook the pasta until al denté.

Heat the sauce in the sausage drippings with the garlic and herbs.

Layer some sauce in the bottom of a casserole with some ricotta.

Toss the pasta with the remaining sauce, layer into the casserole.

Top with mozzarella and more ricotta, and some more herbs.

Post-script: After shopping today, I went to the bar after dropping my ZipCar off for a drink. I brought a couple of nice early-season tomatoes. The bartender brought bacon, lettuce, eggs and tomatoes to make BELT sandwiches for brunch. The neighbor brought down some jambalaya he happened to have made for a party.

By 1PM I had had two meals.

It was a beautiful thing.

Post-post-script: Like many people, I learned of the passing of Stephen Colbert's mother when I got around to watching his moving tribute to her on the Colbert Report.

Chowbacca! morns her passing as well.