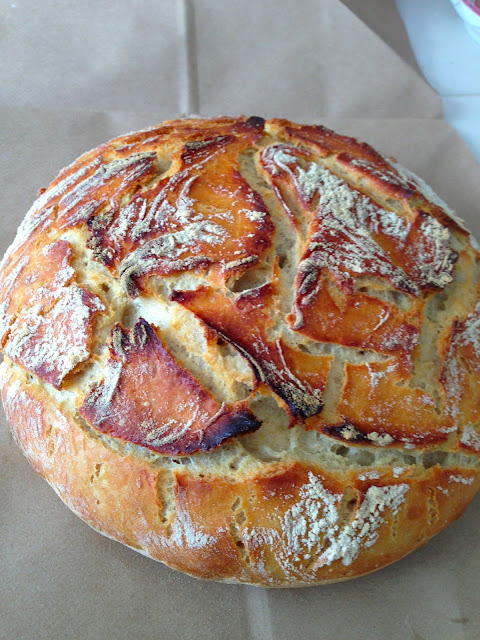 Start this at least 10 hours before you plan to bake it.

In a large bowl add -


The dough should be the consistency of a thick batter, loose but coherent.

[ Editor's note: during this time gluten will naturally form over time as yeast unwinds the proteins in the flour allowing them to form long elastic chains. ]

Keep it in there during this next step, it needs to be hot,  the longer the better!

Spread a clean tea towel out flat on your countertop.

Blanket the towel in an even layer of flour, about 3/4 cup.

Remove pot from oven and set it near your floured towel with the lid off.

Pour the dough mixture out of the bowl directly onto the floured towel, then fold the towel over the dough so you can carry it without it sticking.

Use the towel to guide/pour the dough into the hot pot, shaking to evenly spread dough around in the pot.

Replace lid and bake for 30 minutes.

After 30, remove lid and bake until nicely colored and hollow sounding when you tap on it, about 30 more minutes.

[ Editor's note: if you have an instant read or probe thermometer, you are looking for between 215ºF and 225ºF on the crumb of the bread - the part furthest from any crust, in the center of the bread. ]

Remove from oven and turn out onto cooling rack or on a folded dry tea towel to prevent moisture from accumulating and softening the crust.

Let cool completely before you cut into that crunchy-crusty goodness - at least 90 minutes.


[ Editor's Note: Once out of the oven, bread needs to set. This is essentially the beginning of the staling process, but like a pot roast or chicken right out of the oven, the internal temperature has to cool off or all the moisture will run out of the product as soon as you cut into it. Not only does the bread have to cool off, but the gelatinized starches need to re-crystalize, forming a hard crust and a sturdy structure - to hold things like butter and jam! It is torture, but it is worth it. ] 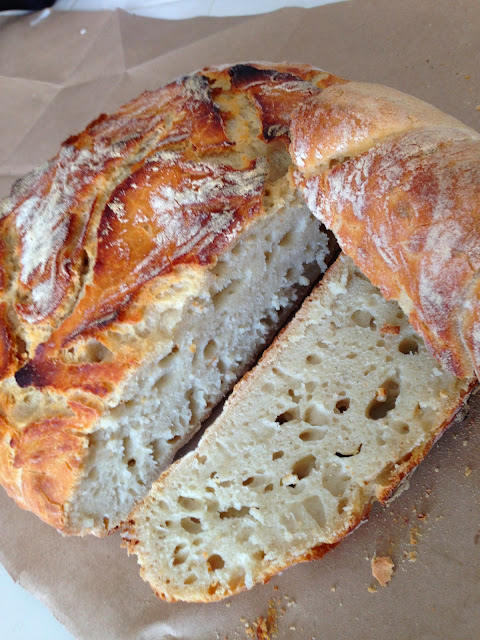