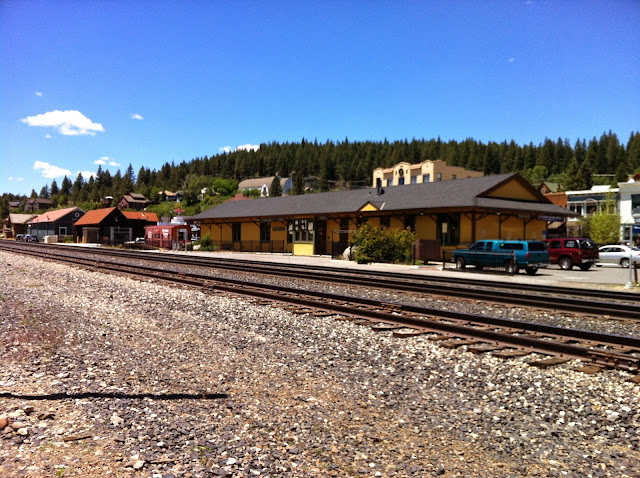 Truckee is the last waypoint eastbound out of California before the train takes you into Sparks, Nevada then on to Reno. The train follows Interstate 80 to Salt Lake City then breaks off dipping into Colorado and coming back up through Nebraska, joining I-80 again in Lincoln and continuing through to Chicago.

This is the Amtrak California Zephyr route.

The City of Big Shoulders would be the beef slaughtering capital of the world at the end of the 19th Century, and the focus of Upton Sinclair's exposé "The Jungle" in 1906. President Theodore Roosevelt did not brook favorably to Sinclair's Socialist ideals, but did concede to taking action against conditions in abattoirs after reportedly making the mistake of reading "The Jungle" while eating a sausage sandwich.

I'll leave it as an exercise to the reader to check out "The Jungle", and I suggest following that up with "Nickel and Dimed," "Fast Food Nation" and "Omnivore's Dilemma". There are passages in each book that I do not recommend reading while eating.

Shifting back to Truckee, one of the primary purposes of the railway was to get livestock to the abattoirs in Omaha and Chicago. Beef was a major export from the United States, and meat consumption swelled during the advent of the age of railroads. San Francisco may be known as the Gold Rush City, but it was also very much a cow town like much of the Old West.

Folks compelled by a sense of adventure and the promise of riches (both by staking claim to land and later discovering precious minerals like gold and silver - regardless of prior occupants) fanned out across the great plains of the Midwest (then the Western Reserve) as early as the first quarter of the 19th Century. The Lewis and Clark Expedition sparked the pioneer spirit with its descriptions of natural riches. The fever dream of Manifest Destiny took hold and continues to spread unabated today.

Anyone today who has traveled by car, bus or train across Wyoming and Colorado or New Mexico or Nevada, or crested the Sierras to gaze out over the Sacramento Valley spreading out below experiences a sense of awe at the sight of all that beauty.

For 19th century European-American explorers, that awe must have been ecstatic.

Some explorers weren't so lucky.

Truckee is situated on Donner Lake, so named after the party that was vanquished there during the 1846-1847 winter, en route to Sacramento through a "short-cut" in the Sierras. The party was stymied in Utah and Wyoming, and arrived in Truckee months after they were supposed to have made it to Sacramento. They faced an especially harsh winter and were trapped in Truckee with no provisions.

Unfortunately for them, there was no Jax At The Tracks diner, so they had to pursue other sources of sustenance. 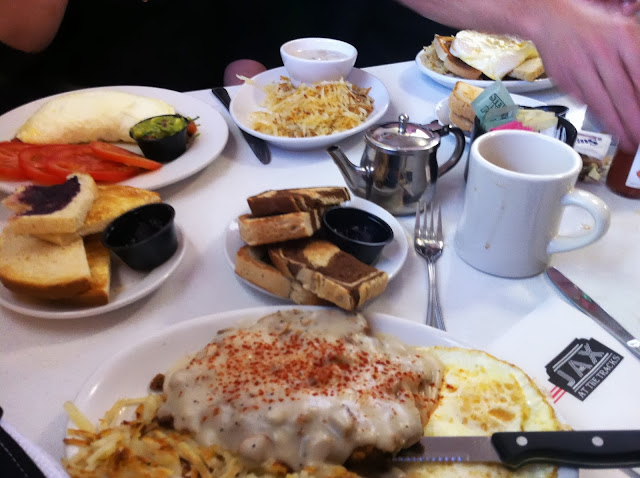 Speaking of unappetizing subjects, Jax At The Tracks is absolutely giddy to remind everyone who dines there that they were featured on Diners, Drive-ins and Dives, which is a show hosted by Guy Fieri.

His schtick is to be like the creepy middle-aged gym teacher with his cargo pants, loud shirts, Ray-Bans, frosted spiky hair, hip-down-fresh-daddy-o lingo and goatee. He's the Food Network equivalent of a drive-time DJ: Fieri's every treacle-dripping clichéd utterance makes me nostalgic for the cartoony "BAM!" cheesiness of the Emeril Lagasse era.

Maybe he's a sweet fellow who is kind to animals and gives to charity in real life, but his on-air persona is as obnoxious as the yellow Lamborghini that was famously stolen from him here in San Francisco.

(For those of you who do remember classic Emeril, you will remember Tony Bourdain mercilessly mocking him and his shows. Bourdain of course has since eaten those words, and even wrote Chef Lagasse into a small part playing himself on HBO's "Tremé". Must see TV, by the way.)

Of course, Fieri was never a guest of Julia Child nor have I seen any evidence that his cuisine sensibilities elevate beyond his flagship restaurant Tex Wasabi, a confusing and confused mix of Southwest and Asian influenced meals made a'la "TGI McFunsters", deep fried and drenched in ranch.

The fact is, Fieri is a business man and he knows what Americans like to eat. Americans will eat it regardless of or perhaps quite directly in spite of reviews such as the one given his Times Square restaurant by the New York Times. Amazingly an otherwise silent cabal of high-fivin' potato skins eaters came to his defense.

I'm not above a greasy spoon, but what I loathe about Fieri is the hair-product laden fist-bumping theatrics of it. Huell Howser, had he made restaurant reviewing part of his schtick, I would have followed into hell. Fieri, not so much.

Jax At The Tracks is worthy of some praise, however: the impossibly fit servers that work there, who must in their spare time take full advantage of all the area has to offer in terms of biking, trail hiking, skiing, snowboarding and whatever other extreme sports one can indulge in, in the Tahoe area.

When we sat down even the wife in the husband and wife pair I was dining with took note of the 19 year old body on our 40-something year old waitress. I could tell there was a whiff of jealousy on the husband's face whenever the bus-boy would refill our waters, an earnest townie who cut a figure straight out of a Tennessee Williams play: tan, ready to bail hay and rassle.

After myself being busted "taking a picture" of one comely young waitress I set my mind on determining which dish NOT recommended by Guy Fieri to pick and decided on the classic steak and eggs (a portion that was easily enough for three meals but I split into two - one half for breakfast and the other half for the bus to Sacramento). 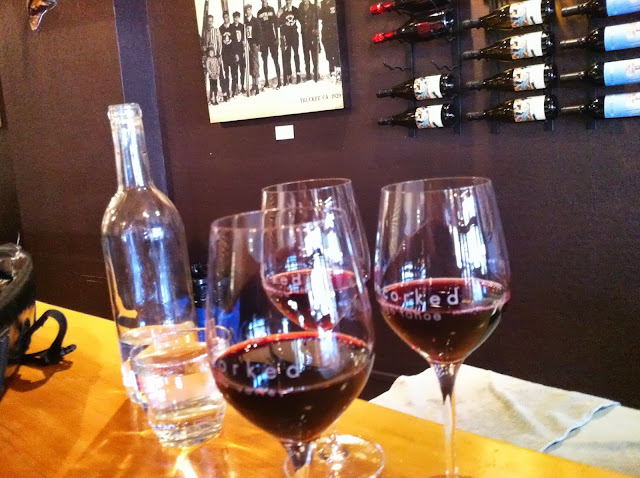 Did I mention the Donner Party?

One of their tactical mistakes was getting caught in the mountains without enough provisions. I was determined for this not to happen to me so after breakfast I ventured out to stock up - or at least fill my canteen.

It was along Truckee's main drag that I stumbled upon the Uncorked Wine Shop (and Bar), and I knew that my recently cleaned out thermos could hold 800ml of liquid, conveniently 50ml more than the standard bottle of wine.

"So, I'm taking the bus to Sacramento," I started, "and I'm thinking about doing a pinot noir from Oregon - something under $20."

"Well," said the barista, "it just so happens we have several great wines for that price range, and some of them are even screw top. If you want, you can taste three of them for $10."

I ended up taking a Argentinian Malbec ($15) with me, a screw-top (as I was not flying, I was prepared with my own wine key) and wandered down the main drag for a couple bottles of beer before I would have to saunter back to the train station.

I felt not an iota of nostalgia for the covered wagon days. 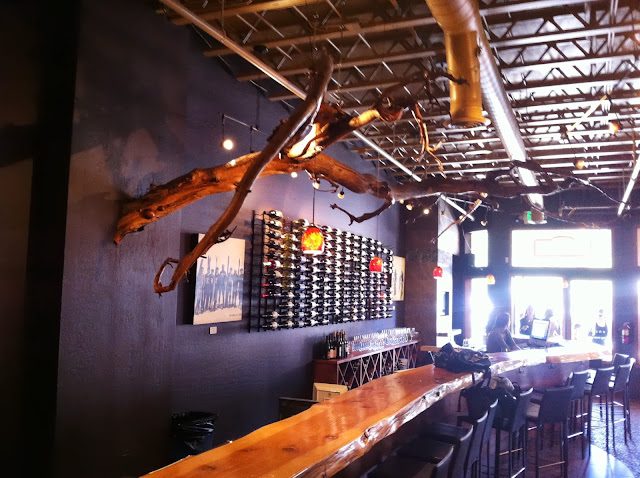 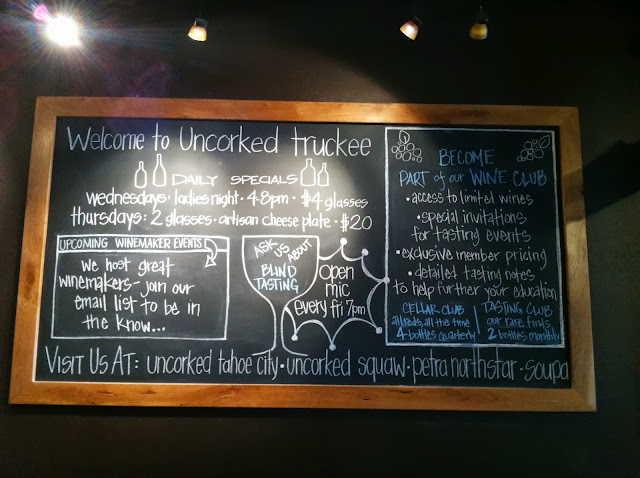 The Tourist Club is one of two bars on the main drag in Truckee.

I wandered in for a beer (when in Rome, drink an IPA) and found myself signing up for a cooking competition hosted by Sierra Nevada Brewing Company (in Chico, CA) hosted every Sunday in the summer.

Each dish must feature a Sierra Nevada beer or product (they produce some pretty decent mustard).

I won't say exactly what I plan on grilling, but I will say that I'm signed up for August 11th. So if you're in the area, come support me.

And it doesn't matter who wins or who loses as long as they stock the bar with Powers Irish Whiskey. 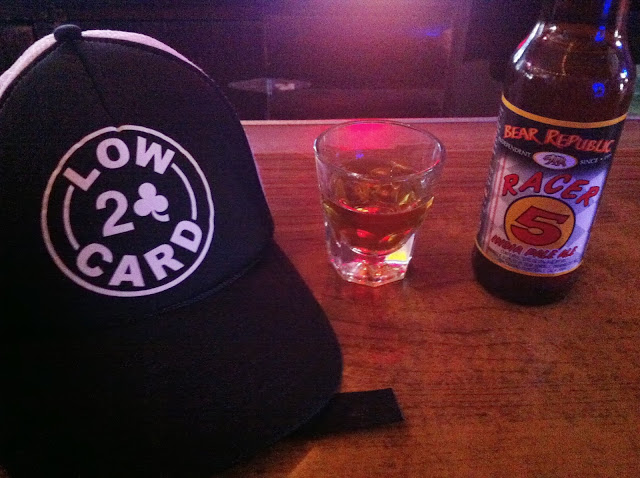 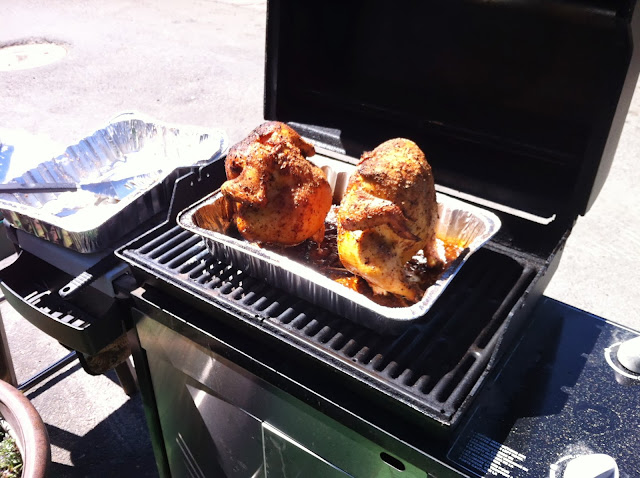 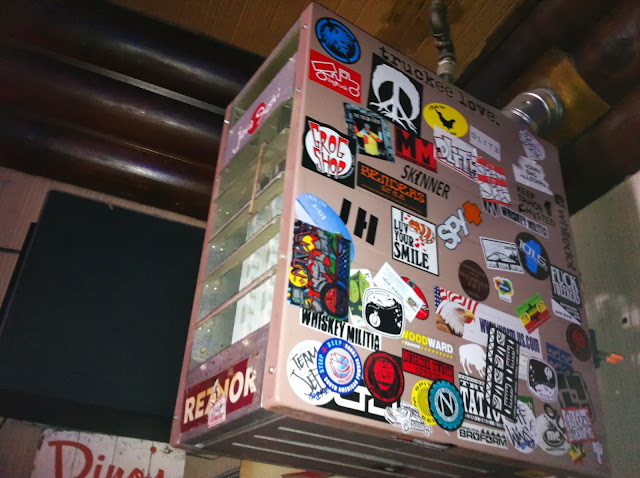 I couldn't help but get up on the Reznor (of the George Reznor Heating and Cooling company of Mercer, PA, grandfather of one Trent Reznor, also a Mercer native who emigrated to Cleveland, Ohio where he formed a little band called Nine Inch Nails).

See if you can spot which sticker is mine.