Mise en scene: Sunday night and I'm settled in with Riki to watch some TV after she generously offered to pay for dinner if I cooked it. Will McAvoy is making a speech, and Sorkinisms abound. I hear my name being called from the other room.

Roommate: Chris, come here.
Me: (Ignores her, reaches for remote, turns up TV).
Roommate: Chris, can you come over here?
Me: (Pausing TV) What?
Roommate: Chris, I need to show you something.
Me: Is something on fire? I'm trying to watch Newsroom you foul woman!
Roommate: Will you get your ass over here and stop being a dick about it.
Me: (Walking over to kitchen, roommate is standing over the stove) God! Fine!
Roommate: You need to cook these more (pointing at the mussels, which steamed for 12 minutes uncovered in the oven).
Me: They're done.
Roommate: They're not done and I'd get fired if I served these to a customer.
Me: (Turning on broiler) Sigh. Fine.

Naturally, she was right.

The first approach was to steam them, but they just needed about 5 or 6 more minutes under the broiler.

The impetus for all of this came from wandering around Whole Foods spending someone else's money. This is less fun than it sounds: when it's my money, I spend it like there may be no tomorrow (because, there may not be).

I cannot spend someone else's money without feeling guilt. Not shame, I'm not above charity (ask several bartenders around town), but I feel an obligation not to be in arrears with friends (especially friends who may work two or more jobs to afford rent, or are just scraping by, etcetera).

So I chose carefully - even trying to sweeten the deal ("we can go to Safeway if you want"). No, she insisted in Whole Foods (moreover their cheese section), and we weren't about to hike the mile to and from Rainbow.

$7 a pound squid, I thought, we could afford that. $4 a pound farmed mussels, not a bad deal plus farming of mussels is good for the environment.

Then I saw it - $13 a pound for octopus. I immediately flashed back to coastal Italian cuisine, the heady pulpa stews with olives and tomatoes and bottles of wine and happy Italians saying "ciao" to one another riding along on their Vespas up and down the vias in coastal villages.

Of course, not wanting to make a huge production of it, I figured the Spanish one-pot paella would be better suited to lounging around and watching cable TV, so I also picked up a bag of nice California grown short grain brown rice.

California Brown Rice Seafood "Paella":
"Paella" is a classic Valencian Spanish one pot meal that can be made with chicken, rabbit, sausage, pork, seafood, etcetera. The word paella is a Catalan variation of the Old French word for "pan", paelle.

We're using a Lodge cast-iron pan (you could also use a Dutch oven or a Le Creuset).

Notably absent in my version is the saffron. Don't really care for the stuff, and we're on a budget (saffron starts at about $1500 per pound, but you only need 1/10th of a gram of the stuff to ruin, er, flavor your dish).

Sweat the aromatics (onions, garlic, shallots, carrot) in oil then add the rice.

Add the tomatoes and the water, half the basil, half the tarragon, all of the thyme.

Add the octopus, whole, and squid.

Salt and pepper lightly, you can add more later on.

Bring to a simmer then transfer onto a sheet pan and put in the oven.

After about 50 minutes to an hour, the rice will be the consistency of risotto but the octopus will still be tough.

Add the wine now, and half again basil and tarragon.

Stir and return to the over for another at least 45 minutes, until wine nearly evaporates.

A fork should easily go through the octopus, which you can cut with a pair of kitchen shears.

Add a cup or so of water, add the mussels and place directly under a broiler for about 10-12 minutes.

Garnish with remaining basil and tarragon and raw olive oil. Allow to cool for at least 20 minutes before serving.

Or, to paraphrase Aaron Sorkin (speaking through many of his characters), "garnish, don't garnish, it's all up to you." 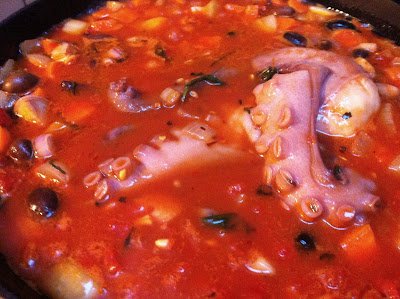 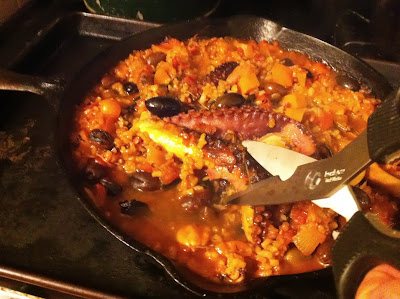 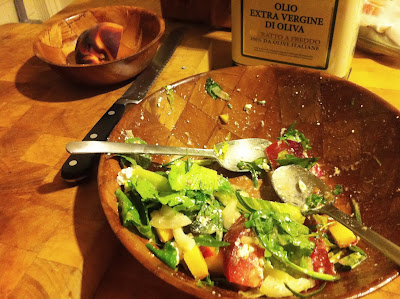 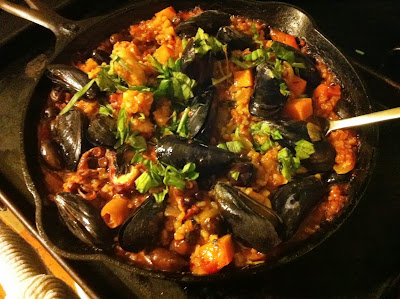 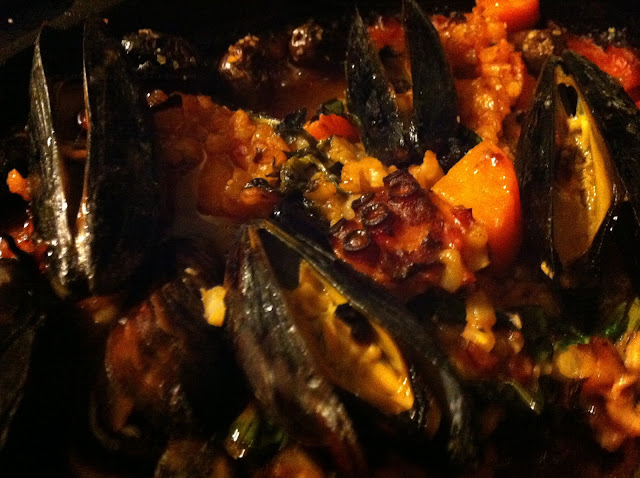