If you grew up on the east coast you may have heard this cut referred to as the Newport Steak. The tri-tip is a portion of the "bottom sirloin" sub-primal that connects into the shank. Prior to the 1950s, when an Oakland butcher began marketing the cut as "tri-tip", this muscle group was generally ground into hamburger meat or cut into steaks. It is a working muscle with not much fat, therefore inexpensive. California grill masters quickly learned that it is a cut well suited for a dry salt-based rub cooked slow and low and infused with hard wood smoke.

While I have been known to butt heads with tradition, I saw no reason to do so when I was up in the Sierras a couple weeks ago. The Mountain Man had rescued a metal barrel smoker from the road-side. Some heartless person had discarded a custom welded rig: a steel gas or iron tank bifurcated lengthwise with a beveled stove pipe (possibly in place of the tank's original mode of access). The whole works was mounted to a metal frame with wheels so that the whole thing could be rolled into place and back onto a flat-bed - perhaps on to the next BBQ.

Save a few mis-matched metal grills warped from age and corrosion, the internals of the rig were sparse compared to even the most humble of modern Weber charcoal grills. We set a smaller grill on fire bricks to hold the coals a little closer to the main grill piece which lay on a leveled edge that had been welded in to support the grill.

Enough about the hardware, let's talk about the "guest of honor."

Putting flame to meat is probably the one trick early hominids learned that gave them an edge over the other primates for a variety of reasons that would bristle those who have thrown out all reason and joined the "Paleo Diet" bandwagon.

I have no qualms about ingesting raw meat - just the other day I was putting back oysters on the half shell and washing it down with beer (a surefire gout trigger if you have the gene, but in my opinion worth the trouble). There are elements of many diets that are grounded in a certain sort of "folk wisdom" that may not be entirely baseless - paleo diets suggest modern health problems stem from modern diets, but instead of resetting our diets back to the 19th, 18th Century or even 4000 BC, they go back as much as a couple of million years. The diet eschews cultivated grains - taking our current and irrational fear of wheat gluten and extending it to any starch sowed by modern humans (10,000BP and on). That list includes corn, quinoa, rice and even potatoes.

I have often been accused of eating (and lately, looking) like a cave-man, but not enough to make a religion out of it. All diets are religion. Like religion, most of them are entirely wrong, and almost all of them prey on the naïveté of their adherents (happy Sunday!).

I happen to also like cooking my meat, thank you (although often not very much). I also like smoking it, a decidedly non-paleo way of both flavoring and helping to preserve meat.

The techniques to do so have evolved over 10,000 years but I can imagine an early human having come out of the cave accidentally putting some damp wood over a fire thus generating an excess of smoke.

The primary wood source in the high sierras is pine which contains too many bitter compounds to be a good candidate for a smoking wood. We used some hardwood taken from lower altitude and soaked in water and store bought mesquite lump charcoal started over standard pressed briquettes.

Here's some more details for the uninitiated:

A very basic dry rub is nothing more than salt, pepper and powdered chili.

Chances are all of the above were in my dry rub, because I went for every thing I could find in The Mountain Man's pantry (he professed a love of Lawry's knock-offs, which I also enjoy mostly because they are mainly MSG).

I made about a cup of this mixture and rubbed it into two 2 pound tri-tips plus a chicken that I had spatchcocked.

I spatchcocked the chicken knowing that in doing so I would make it easier to grill and impart flavor into over direct and indirect heat, and also that I would get to type the word "spatchcock" several times. It's a fun word. Spatchcock.

Both were given several hours to seep into the meat before the main event.

First the chicken was seared for just a couple of minutes skin-side down, then roasted bone-side down for several minutes before being transferred to the middle of the grill with the drumsticks facing the hot side. This was turned frequently throughout the next two hours.

Second, the tri-tip was seared for a few minutes a side over very hot direct heat. My coals were on the opposing end of the drum than the stove-pipe, meaning that the airflow would carry some heat and more importantly smoke from the area directly over the coals to area under the stove pipe.

The tri-trips were transferred to indirect heat and allowed to slowly bake in an ambient air temperature of probably not much more than 200ºF for an hour before getting another walk over hot coals just before being pulled.

The chicken is done when you can easily insert a fork into the thick part of the thigh and the juice exuded is clear.

A small batch of coals were added to put some nice searing to our vegetables, then when the coals had died down enough, we baked garlic crostini on sheet pans over the grill. 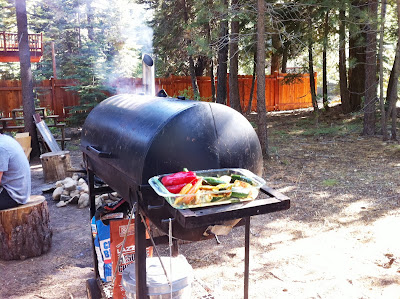 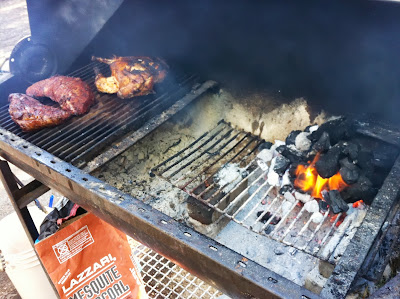 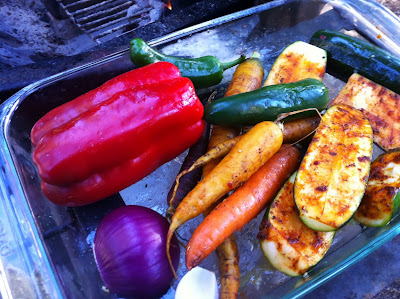 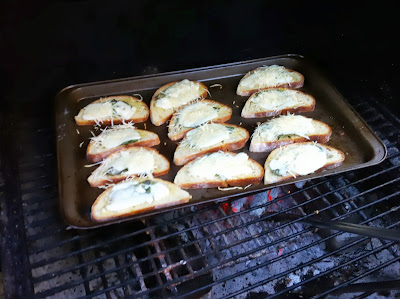 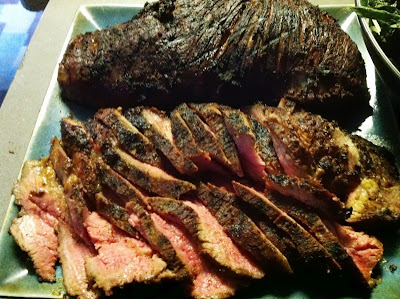 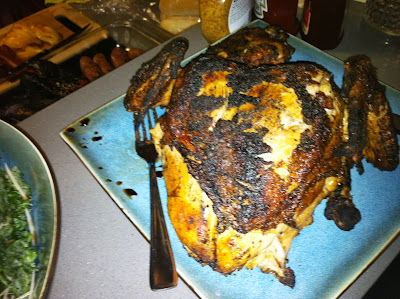 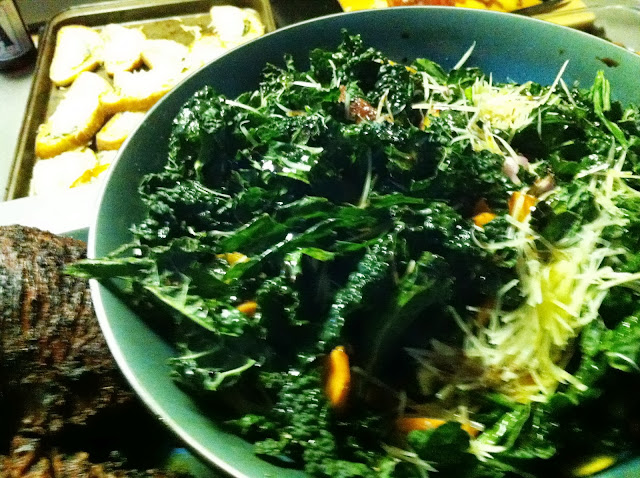