How to Lose With Science:

It is a well known fact that I am incapable of producing the same BBQ sauce twice (and why would I want to?).

More on that later. First, let me tell you about the time that I spent 20 hours making sauce, slow (and I mean very slow) cooking pork baby-back ribs and a pork belly - at great expense - and lost in a competition where 35 out of 29* eligible voters voted.

[ * I'm being a sore loser, I'm sure there was nothing untoward going on. Totally sure. ]

First let me describe the field of competitors:

I entered with two racks of baby-back ribs and a Cleveland style stone-fruit BBQ sauce, plus a 1 1/2 pound bone-in pork belly that I cooked sous vide in Kentucky red-eye marinade (whiskey and coffee, primarily).

More details in a few.

I had three competitors in a loosely defined "pork" category (there was a macaroni and cheese category I didn't compete in):

Ravi, hosting the event, with three full racks of pork ribs, dry-rubbed and smoked. These were smoked with hard wood and were falling-off-the-bone-tender. I'm sure they were dry-aged for over a day. I would not be surprised if the spices were hand-roasted and blended.

Ravi was also serving bacon he deep fried in bacon fat from various sources around the Bay Area (if you haven't had Foreign Cinema bacon then you haven't seen Shakespeare as it was meant to be played). This did not count as an entry into the competition, however.

Bobby entered with Cincinnati pulled smoked pork shoulder sliders. The rolls for the sliders were hand made sourdough milk buns (in a former life Bobby was a bread maker). The pulled pork cooked for no less than 12 hours. The BBQ sauce was no doubt handmade with top notch organic ingredients (Bobby is very picky). Kettle chips and a health slaw accompanied the pulled pork on the slider.

Stimmy made something called "the porkinator."

The porkinator consisted of bacon wrapped bulk sausage stuffed with cheese that was baked. The bacon was the bulk variety you can buy at Whole Foods, as was the sausage.

Of the 72 total hours of cooking time that was likely put into making all of the dishes combined, "the porkinator" probably accounts for less than two.

Congratulations, Stimmy. I guess nothing beats bacon wrapped and stuffed with cheese.

I'll concede, it was pretty tasty.

Adam J. O'Donnell lent me his immersion circulator after Porkpocalypse II, along with a vacuum sealer and a pressure cooker.

Then the Boston Marathon happened, and the cooker sat on my kitchen floor for months as a grim reminder that a psychopath can turn the most innocent thing into an instrument of destruction.

Then the 4th of July happened, and we had a BBQ over at Ravi's, which is how I got involved with Pork of July (ostensibly, his fiancés birthday party). And as I toyed with ideas in my mind on how I would beat a seasoned amateur BBQ master like Ravi I realized that if I didn't sous vide my pork ribs in that pressure cooker then the terrorists had already won. 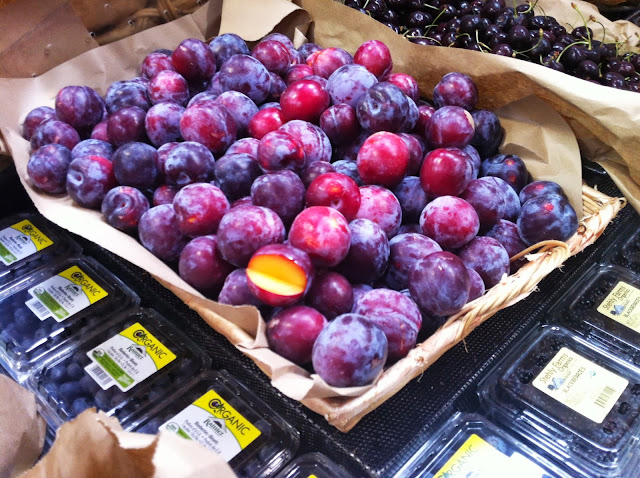 Get yourself some stone fruit. This is the fruit you want, this is the time of the year to get it.

Now San Francisco has three BBQ seasons: late winter, summer and early fall (this is often referred to by the natives, without an ounce of irony, as "Indian summer" - my co-worker from Mumbai swears he knows nothing about where the name came from).

In late February or early March we get a week or two of hot weather. There isn't much is going on in terms of fruit at that time of year, so that's when you get out your tri-tip and your dry rub (or possibly something with a late winter citrus).

In July, any fruit you would want to base a sauce on is in season (with a few notable exceptions).

In the fall - late September to early October - you are looking at pear and apple season. This is the fall BBQ catalog. Also at this time you begin seeing some citrus coming into season in California.

The thing to remember, beside seasonality, is that you can't judge a book by its cover when it comes to selecting the right produce for your BBQ sauce.

Those chunks cut out of the fruit pictured above and below? Those are there because I stopped a Rainbow worker and asked them to cut me a sample. If the fruit doesn't taste like anything, your sauce won't either.

Each worker in the produce department at Rainbow carries a knife for this reason (and to dispatch any unruly meat eaters or CIS males with unchecked privileges, or people who read Ayn Rand and preach free markets).

Speaking of meat, it was off to Olivier's Butchery.

Olivier's wife, Hang Nguyen, was there that day to help me select two nice meaty racks of baby back ribs. As a bonus, she directed me to a lovely pork belly, skin on, cross cut and including the frontal rib section.

I also picked up a couple of onglet (hanger steaks) and a bottle of Sriracha and hastily made my way back to my illegally parked ZipCar. 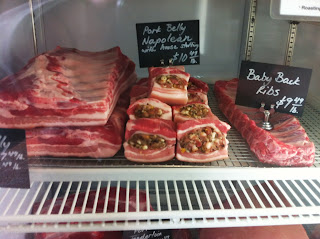 A day passed before I was able to get around to contemplating how all of this would come together. As often times before, I found my self getting motivation through the magical elixir of adult beverages.

Late that night I spread my larder of produce and meat before me and through sheer force of will and the Power of Powers got my ribs bagged and ready for the immersion circulator. 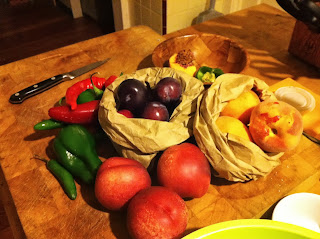 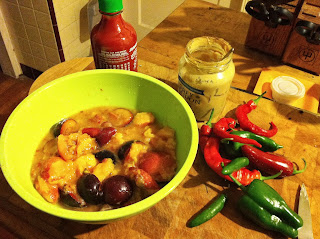 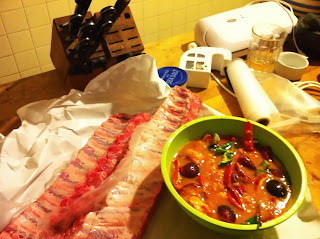 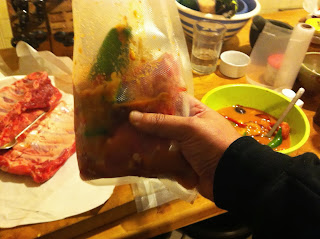 What's In a Sous Vide Bag?

Well, that's a good question. I wish I could tell you.

I know that 1/2 of a bottle of drinkable white wine went into it (the other half went into me).

All the fruits and vegetables pictured above went into it.

Everything was sealed up into a bag and shoved into the refrigerator where it sat for a couple more days...

Up to this point I hadn't decided whether I was going to sous vide the pork belly as well or braise it in my cast iron in the oven.

I had plenty of extra time to sous vide both - 8 hours for the ribs plus another 4 hours on top for give the pork belly a total of 12 hours at about 150ºF.

The thermostat for the immersion circulator goes up above 200ºF but no matter what I set it at, my water, which started at 119ºF out of the tap never got above 152ºF.

A couple of years ago we complained to the landlord that we weren't getting enough hot water for baths and showers. A few months later the old water heater completely gave out. The new water heater spits out scalding hot water now - no complaints from us! Plus, it means water boils that much quicker for coffee and tea.

The hot water from the tap certainly shortened the time it took to get to 150ºF, but I'm not sure the circulator was able to keep up with the heat exchange from the open air or through the sides of cooker.

Next time I try this I'll just open up the gas underneath the whole thing and come up to a boil (and cool off) before introducing the circulator.

What I didn't want to do was overheat the ribs. In hindsight, the cold ribs from the fridge should have been enough to bring the water temp down (had I let it come to a boil - 212ºF at sea level).

I wanted to cook at 162ºF, which is the "kill zone" for microbes. Still, the marinades were heavy on salt, acid and alcohol - three things un-friendly to pathogen growth. 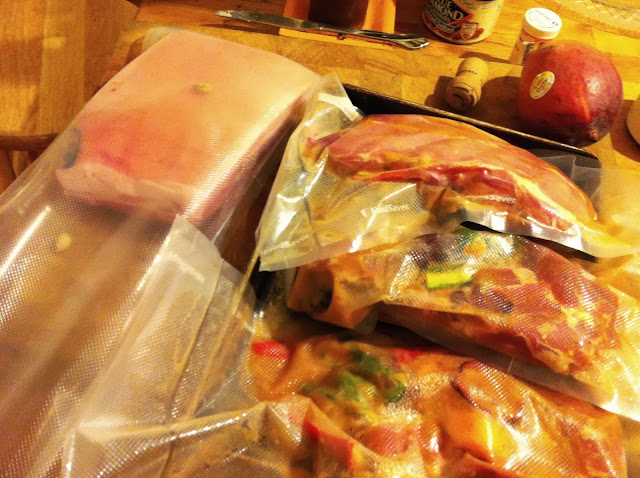 I said the marinades were inspired by adult beverages and I wasn't joking. I had a mango (which they say contains enzymes that break down protein very quickly), and I had Bourbon and ginger ale.

Four or five ounces of Bourbon for the marinade, 6 or 7 ounces for the chef. 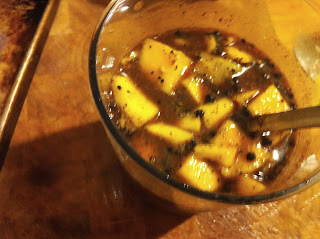 After 8 hours, all the contents of the rib bags were drained into this pot and allowed to simmer (with the addition of more chili flakes, and adjusting for seasoning - reduce, then salt; add brown sugar, add mustard, add cumin, etcetera). 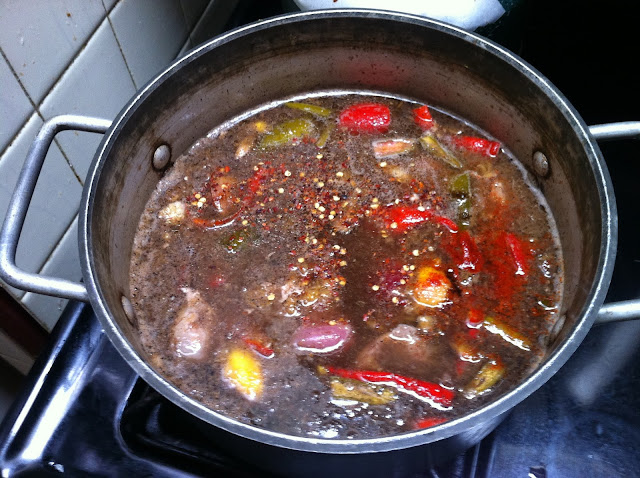 Hit the whole thing with your stick blender then strain it (first straining):

I re-sealed everything once the pork belly had gone for another 4 hours, straining it's marinade into my reducing BBQ sauce. 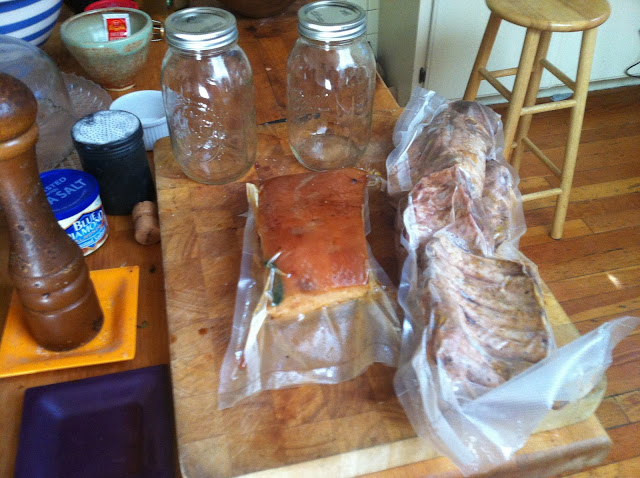 I finished the sauce with a surprise secret ingredient: dried dill.

I know it seems strange, but it worked. A hint of liquorice, something herbaceous. Brightened the whole works up.

Also added orange zest and a few sprigs of thyme.

After simmering for another 40 minutes (for a grand total of about 5 hours after taking the ribs out of the sous vide rig), my sauce was ready for a final straining and then canning. 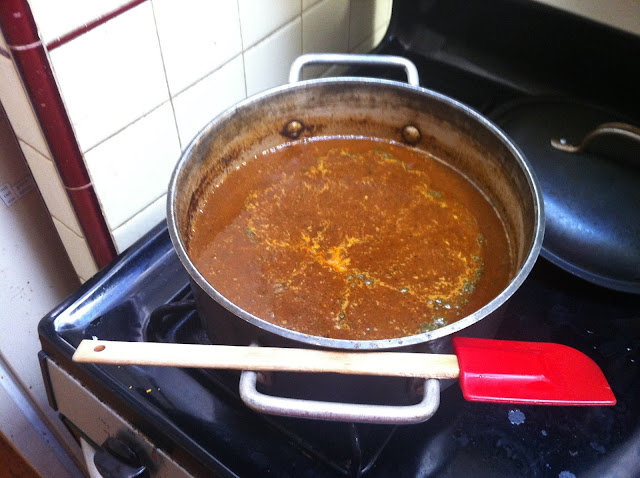 Questions? Comments? Join the conversation on our Facebook page, follow us on Tumblr, circle us on Google+!