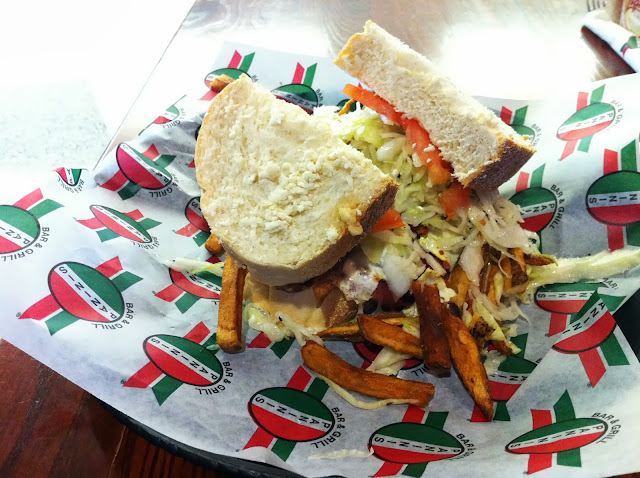 Ti Couz was beloved by many and reviled by some. It was the first brunch I ever ate in San Francisco, way back in 1997, and the locus of many chance meetings, the start of several relationships and probably the end of some.

It was a Breton crêperie serving buckwheat crêpes and occasionally had a raw bar. It's where I first laid eyes on the prettiest waitress in all of San Francisco (YJ), who later lived on my couch for months and who became one of the most important people in my life. For the years 2000-2002, Ti Couz was practically my living room (when the nearby dive bar the Kilowatt wasn't).

Ti Couz closed a few years back. It was replaced by an establishment named Giordano Brothers, whose flagship store can be found in San Francisco's North Beach. They feature a style of sandwich made popular in Pittsburgh, PA by Primanti Brother's Sandwiches - white bread, cold cuts, cabbage slaw and French fries.

Yes, French fries. This is also know as an "all-in-one" sandwich.

Versions of the "all-in-one" sandwich have been copied as far and wide as St Petersburg, Nashville, Toronto and Cleveland.

Panini's is the Cleveland chain that makes their incarnation of this sandwich, a hellish gut-busting pile of carbs, salt and grease that could only come from the Rust Belt.

When their franchise first appeared in Cleveland Heights during the mid-1990s, everyone gained 10 pounds almost over night. Some of us never lost it.

Giordano Brothers is no Ti Couz, and Panini's is not good food, but for one about to fly across country with limited budget and limited food options (airline food? We think not!), Panini's is in fact great food.

Two vodka sodas and a capicola sandwich with a fried egg: about $24 including tip. Eat half at the bar, half on the plane.