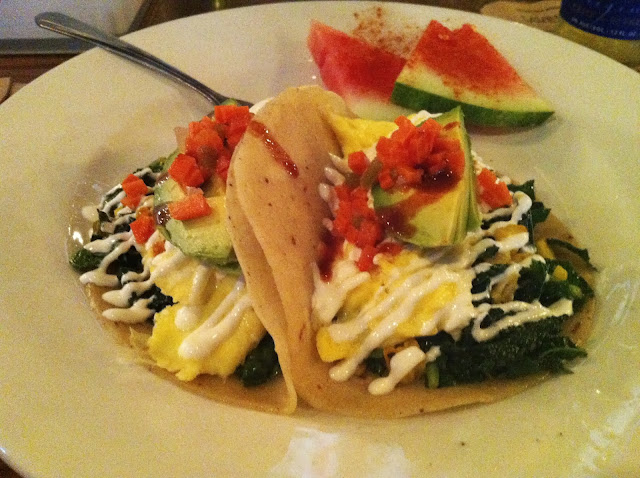 It had come time to pretend to be an adult and do some house work, involving putting up a curtain for which I would need a dowel and the hardware to drill into the drywall. And a drill (which I would borrow, I said "pretend" to be an adult, not actually be one. No, not that. Never that!).

On my way back from Ace Hardware on Market, on a lark, I decided to step off the 22 Muni at Harrison and 16th and walk the rest of the way now that Karl The Fog had retreated back to the Richmond and the sun was out.

I had hardware! I was feeling like an adult! The sun was out, and hey! Looks like they just opened up Dear Mom, which happens to also be at Harrison and 16th. What a coincidence, it's almost as if I planned at, roughly 11:30AM on a Saturday, to get off the bus right when Dear Mom was opening for brunch.

I was hungry for an egg-based dish. What goes better with late-morning egg-based dishes than a tart Crispin cider and maybe a couple of shots of Bulleit Rye? Nothing.

Adult, adult beverage. Get it?

Brunch menu changes frequently, get in before 1PM and beat the crowd.