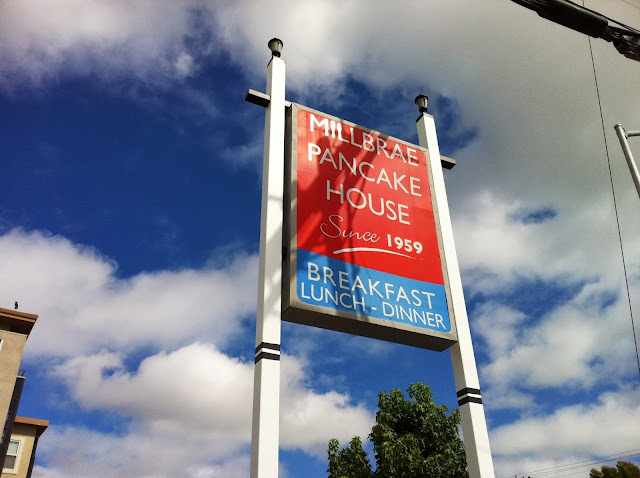 Presenting your photos of the day!

The Millbrae Pancake House on the El Camino Real just south of San Francisco has been in operation since 1959 - a glance around the interior suggests the decor hasn't changed much since then either.

Our party of five was lead to the back banquet room past many two and three tops still lined up outside on a recent pre-Black Rock City Sunday.

Burning Man, of course, is the desert festival that combines raves, installation art and pyrotechnics. Black Rock City swells from its normal population of 0 to an estimated 2013 attendance of 68,000 revelers.

During the festival itself, this is a cause célèbre among San Francisco natives: shorter lines at choice brunch spots during Labor Day weekend, more elbow room during sunny Sunday afternoons at Zeitgeist, and seemingly a mass exodus of those reviled shuttle-bus taking dotcommunists.

Of course, the locals have been complaining about auslanders since the Gold Rush, so what else is new?

Of course, the week prior to Burning Man presents the opposite problem - many more out-of-towners would be in the city, looking for brunch. Couple that with this year's VMWorld conference, and our brunch crew's only option was to go off the beaten path.

Way off the beaten path.

Millbrae, a portmanteau of "Mills" after Darius Ogden Mills and the Scottish term for rolling hills, "brae". Mills purchased the land from the Sanchez family in the 1860s after making a considerable fortune as a banker and later rail road operator during the Gold Rush.

An entire hilltop was stripped to provide land-fill for additional runway extension into the Millbrae Shoal in the 1940s. 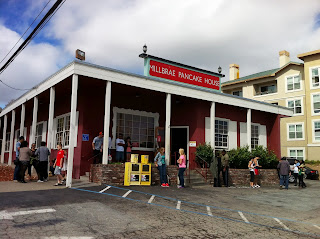 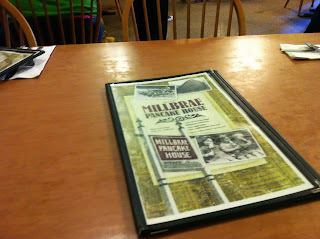 The house specialty is something called "Swedish Pancakes". The pancake is more of a crêpe, spongy and eggy. A compound butter with lingonberry is served with the pancakes. A short (2) stack is a side option for most breakfast entrées in lieu of toast.

The lingonberry is a sort of tart, sweet cranberry analog. Those of you familiar with the horrors of Ikea shopping will be familiar with lingonberry in its myriad forms (delicious on meatballs!). We think the lingonberry butter is a great alternative to smothering your pancakes with what passes for maple syrup here on the west coast.

I had the California Omelette because avocados[*], that's why. Perplexingly, these came with an additional large side of hash browns. About half of my omelette and virtually all of the potatoes were left for a lucky "Freegan" in the Mission.

[ * Clearly, this must be Chowbacca!'s single favorite ingredient of all time, perhaps more so than bacon. ] 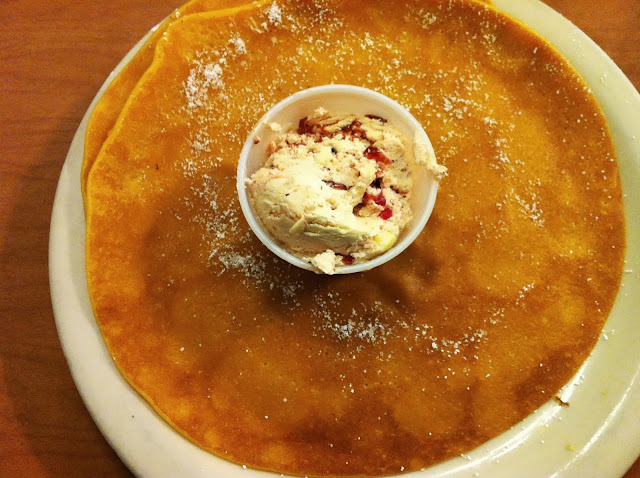