For some time I've been trying to figure out a use-case for having an immersion circulator. Our prior experiments exposed the limitations of the device, as well as failed to produce a "wow" moment: making pork ribs in sous vide was not better than baking or boiling them, and even after 12 hours at 162-165ºF, pork tongue sous vide was not fork tender.

WARNING: The blacked-out section below contains spoilers to the AMC television show Breaking Bad. If you are not current to the penultimate episode you might just want to skip ahead to the recipes.

In the cold opening of the pilot of Breaking Bad, Walter White, contrite, confesses his sins to a camcorder. He is in his white briefs and a T-shirt. He has just killed (or so he thought) two drug dealers who had kidnapped him and Jesse Pinkman, and with one of their guns to his head and sirens fast approaching, we was about to kill himself - sacrificing himself for the sake of his family.

The gun doesn't fire, the safety is on. Just then, fire trucks speed past and the door to their mobile Winnebago meth lab swings open, like a nightmare Mystery Machine, as Pinkman crawls out in a cloud of phosphine gas, rips off his gas mask and collapses gasping for air.

Pinkman is a loser, a drop-out who cooks meth (that he adds cheyenne pepper to - a stylistic flourish that foreshadows Walter White's transformation into Heisenberg). But White was not always the One Who Knocks. At the end we are repelled by White and sympathetic of Pinkman, the living avatar of the collateral damage caused by White's malfeasance.

We are meant to think that the garrotting of drug dealer Krazy-8 at the end of the third episode is a justifiable killing: Krazy-8 was planning on cutting White with a ceramic shard, it was kill or be killed. But the decisions that put White in the room in the first place are only the tip of an iceberg that barrels down on White and Pinkman until we find ourselves now at the final hour of the show: Pinkman a slave of psychotic white supremacists and White dying alone, everything that ever mattered to him taken away - a direct  result of his own hubris - with a trunk full of heavy armaments and ordinance.

The clock is running out for our dukes of moral hazard, Walter White and Jesse Pinkman...

...Unlike White and Pinkman whose fates are still unknown (for now), a pair of lobsters (which my stylist and ace videographer Erik dubbed "Sally" and "Tonya") are certain to die.

A carrot is just as dead as a lobster when you pull it out of the ground, rinse it, chop it up and cook it. A eukaryote* that grows in the ground and uses photosynthesis and another has legs and eyes and gills they are at the end of the day just as dead. We as walking, talking, eye having, breathing eukaryotes ourselves place a premium on those living things most like us.

On the subject of being an omnivore, and the dilemmas inherent, I am more circumspect: factory farming caged chickens on an industrial scale is an abhorable practice, but I do not find cause to be offended by the artisan, sustainable and not-inhumane practice of the gavage by duck farmers (people who argue that gavage is cruel to ducks or geese are usually ignorant of waterfowl biology, the argument that it harms the animal lacks any relation to reality).

The former practice is still legal in California while a small band of "animal rights" activists have seen fit to ban the latter, ruining a single small farmer's business and sending his 60 or so employees to the dole queue during a recession. In the meantime, billions of chickens are forced to live in the dark, in cages, in their own filth whilst kept barely alive with GMO corn and ground up "mystery protein", pumped full of steroids and antibiotics then killed and processed by non-union migrant meat processing workers who sustain an intolerably high level of serious injuries on the job. Nice work, PETA.

I make an extra effort (and pay a premium price) to exclude food from my diet that offends me on moral and practical grounds (not to mention in the interest of my health and public safety in general): eat less meat, be conscious of how it is raised, avoid meat and produce that is produced in ways that eschew humane treatment and safety for scale, efficiency and profit.

Some would argue that the modern abattoir is now more cruel and inhuman than in the days when (according to legend) President Theodore Roosevelt went off his lunch while reading The Jungle, resulting in the creation of the FDA - which is ironically now a fully owned subsidiary of Monsanto, ConAgra and Archer Daniels Midland.

Is the killing justifiable? Is it necessary? I say it is, but I also believe that there are degrees, there are ways to respect this fact and respect the food.

In my heart of hearts I felt a little guilt about killing a pair of lowly lobsters - as much as I may intellectually have rationalized it: it was incumbent on me to end the lives of these two creatures as humanely as I could. So I got them drunk then put them to sleep (I may have got myself a little drunk too).

Life feeds on life, like it or not. Some people may be offended by the following video (my poor videographer was merely freaked out by the giant sea-bugs in my kitchen). You've been warned:

Two lobsters were very much killed in the making of this video and subsequent movie. At between $8-13 per pound, lobster is cheaper than you might expect. However they are susceptible to spoilage so it is best to buy them alive.

First the photos, then approximate recipes for all the elements:

A rolling pin is a great way to extract lobster meat from the shell after blanching. 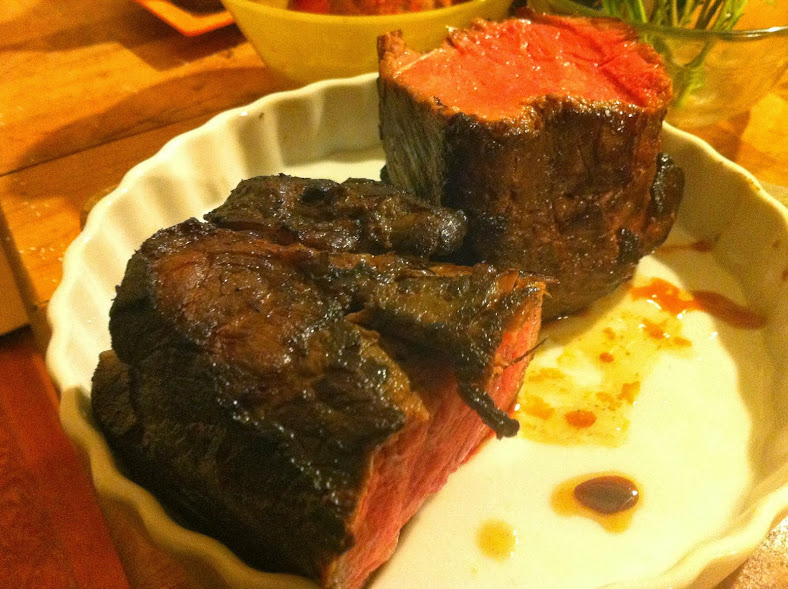 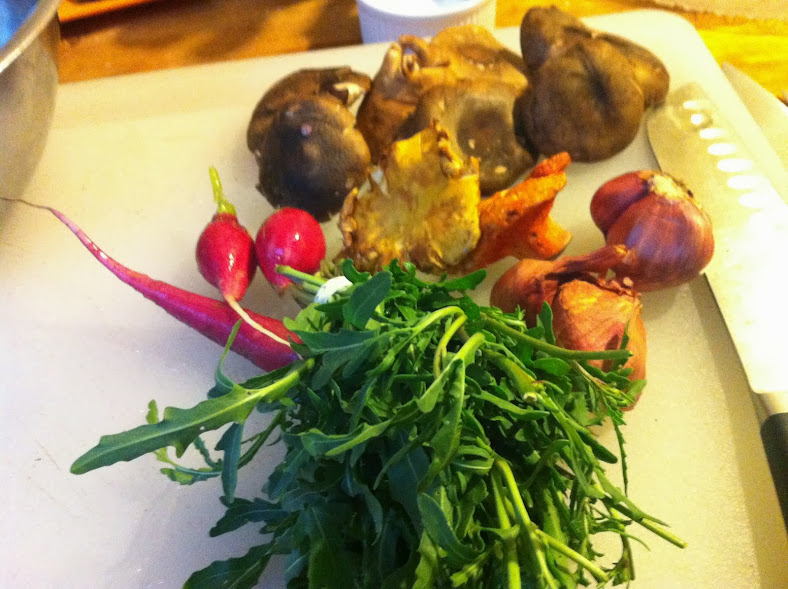 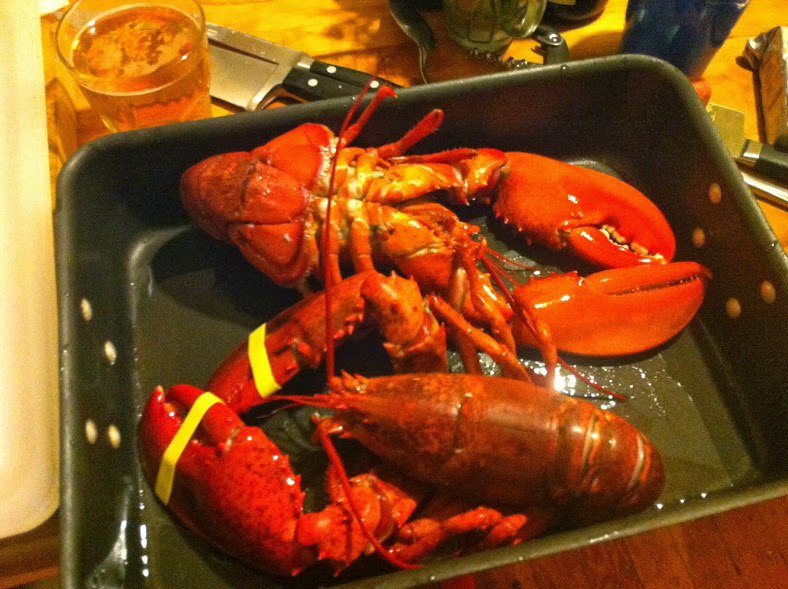 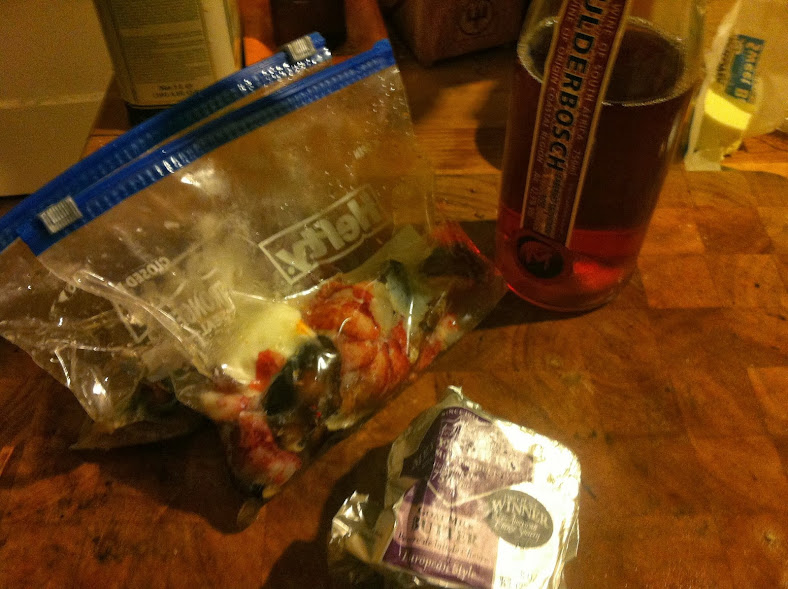 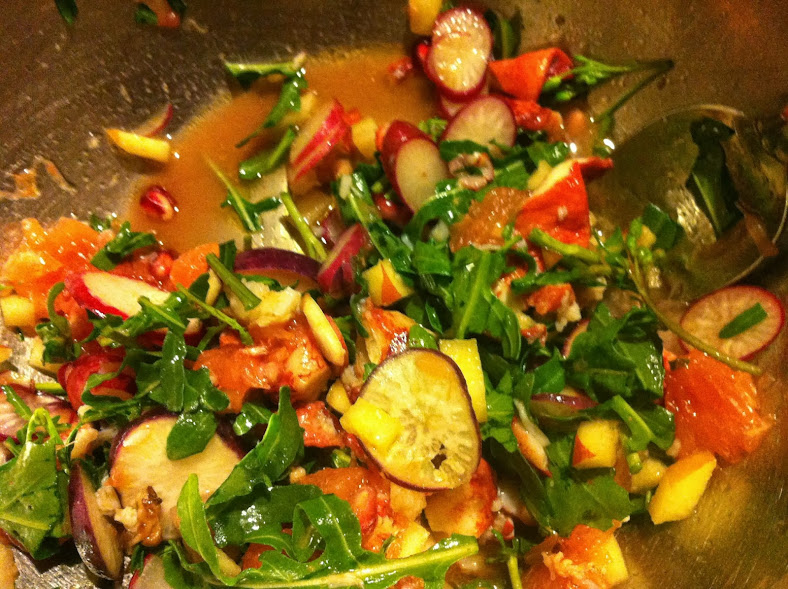 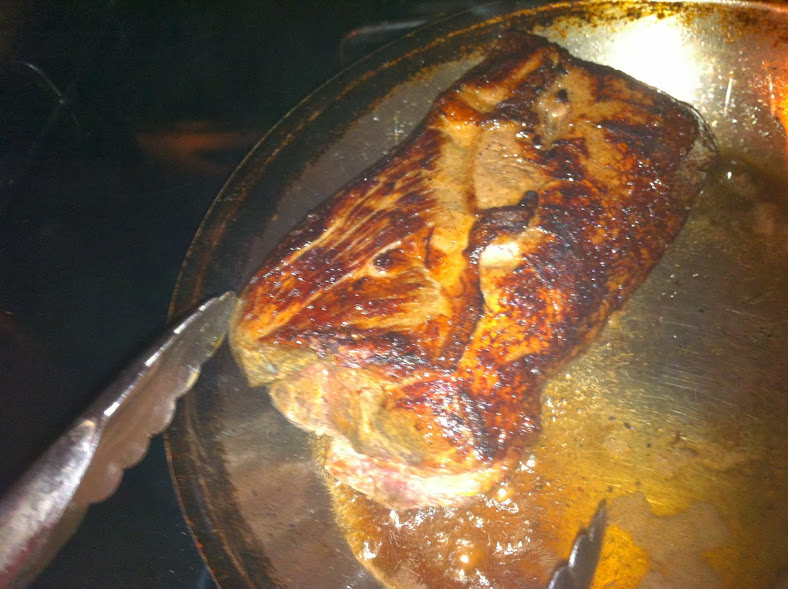 Just in case this meal isn't trayfe** enough for some of you, this beef strip steak is being fried in brown butter. Steak, fried in butter. 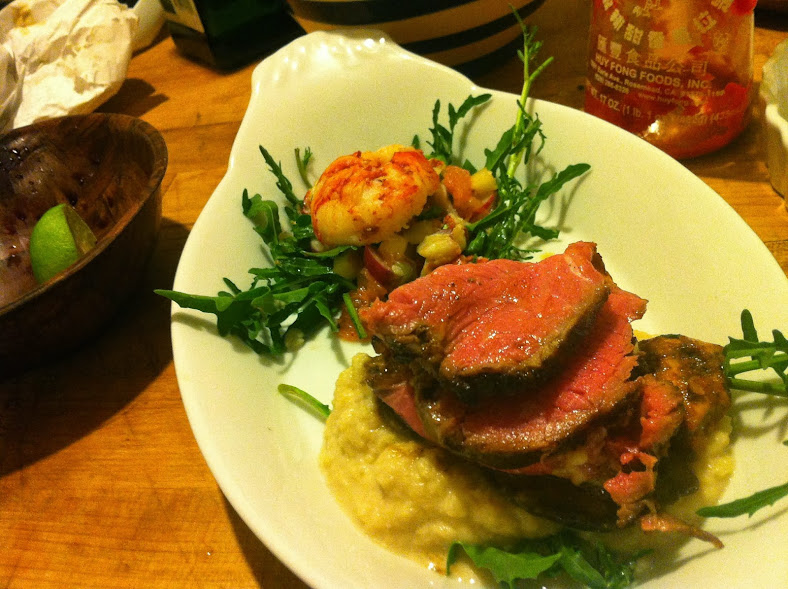 
Seal in a Food Saver or freezer bag.

Sear outside of beef in brown butter until a good crust forms. Rest, slice and serve.

Lobster and Mushroom Sous Vide:
Seal in a bag and cook for about 2-4 hours in a 130ºF water bath.

Remove mushrooms and sautée to serve with the beef.


Simmer turnips in stock for about 20 minutes, covered then return to a boil. Add half and half and blend off the heat using an immersion blender.

Return to heat and allow to thicken slightly, until the consistency of a loose mashed potato.

Turnips are higher in fiber and lower in net carbs than potatoes, and if you asked me have a more interesting flavor that matches especially well with steak. They are just coming into season right now! Turnips are good eats.


Mix then set atop greens (mesclun, radicchio, frisée, arugula or whatever else you like). Serve this at room temperature or even a little warm (you could heat the salad in a large metal mixing bowl double-boiler style from the residual heat of the water bath).


Reduce liquid by about half then introduce berries. Heat through then remove from stove and mount with butter.

Blueberries are at the peak of their season here in California at the end of September and through October.

While we have found a use for the immersion circulator, finally, that justifies its place in the "tool chest", it came at a cost financial and moral (nevermind the beef that also lost its life in the making of this meal - a discussion for another post).

It is very likely that I will use the sous vide technique on a number of delicate items - duck breasts, pork  and veal loins, perhaps even to poach ocean fish like mackerel or tuna (if you've never had home canned tuna you've never heard Shakespeare the way it was meant to be heard...).

Many of these things can be cooked using more conventional techniques, but the slow, low poaching of the lobster, steak and mushrooms yielded delicious, tender, savory meat and the best damn broth I've ever eaten.

Dedicated with love to the cast and crew of Breaking Bad. Chowbacca! will miss ya! Let's cook.