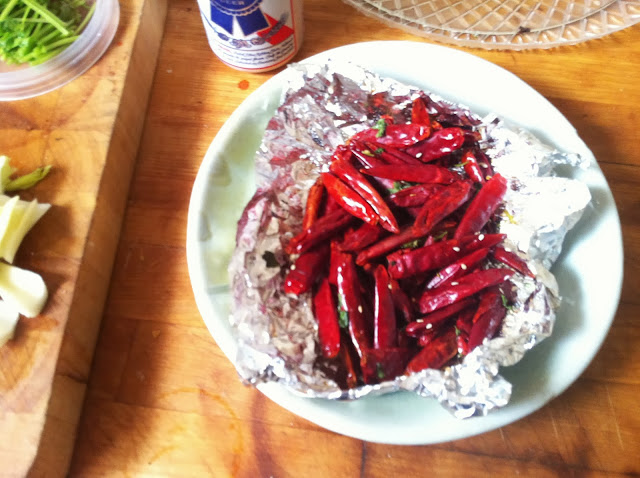 The other day I ordered-in Mission Chinese Food. The chicken wings came buried under a mountain of deep-fried dried peppers.

I couldn't bring myself to throw them out, so I wondered how I could repurpose them.

I also wondered if I could make it in a science-y way. Months ago I borrowed an immersion circulator from Dr. Adam J. O'Donnell PhD (my father insists that this stands for "piled higher and deeper", and he should know - he's a Juris Doctor).

Now I'm not a doctor, but I play one on this blog. But I like science! I like science so much I have a tee-shirt that says "Science: It Works Bitches". True story.

I wondered if I could braise something tough like tongue for several hours immersed in a water bath and end up with tender, unctuous meat.

So I biked on over to Duc Loi and picked up some pantry items and the main event - pork tongues. 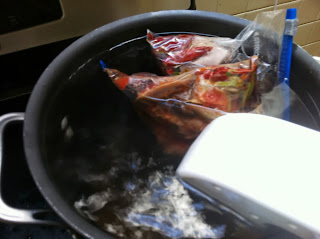 Pork Tongue A La Bowien:
Why PBR? Because that's our nod the the zany hip cool Mission Chinese Food crowd. You are free to use a better beer. In fact, do.

I divided the marinade in two and sealed it and two tongues each into two freezer bags employing the "poor man's vacuum sealer" method detailed here:

Now, you don't have to be a Midwestern survivalist (I assume so, because ending sentences with prepositions is the Midwestern way) to do this at home.

Fill your sink with water and use the technique shown above.

...Seven and a half hours later, I took the bags out. 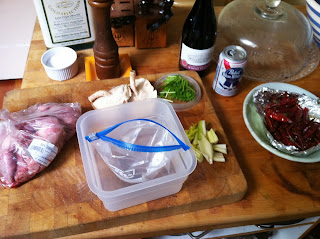 The collagen in the tongue failed to melt, even though 160ºF is supposedly its melting point. But I realized that, as before, the water never rose above 151ºF or so.

Trapped in the bag, the alcohol had no where to go, leaving the tongue "boozy" tasting - not that I'm complaining.

Cut into thin chunks, the pig tongue was good in soup and ramen, which I ate over the next few weeks.

Cold, you could serve thin slices of tongue with hot mustard (I prefer Lev's), a little slaw and maybe an apple.

But I wasn't satisfied with the result - I wanted soft, fork tender, falling apart pork tongue.

Bag the tongues, two per bag.

I set the circulator for 165ºF this time and I pre-heated the water on the stove to just below boiling before closing the flame and turning on the circulator's heating element.

I watched the temperature eventually dip below 165, so I was determined to figure out a way to keep the temperature up and rigged the lid to mostly cover the pot, trapping some of the heat that was escaping.

It worked! The temperature was holding. Before going to sleep, I dialed it down to 162ºF for the rest of the night. 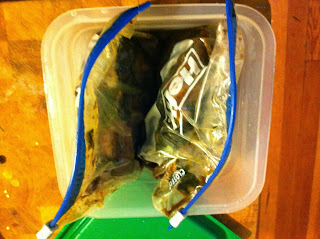 ...I could tell from the springy feel of the tongue through the bag that they were still fairly tough. Even after 12 hours at over 160ºF.

All This Science I Don't Understand:

So I did what I should have done in the first place: I put the tongues in a braise and I stuck them in the oven at 275ºF for about two and a half hours.

But I am not finished with the immersion circulator just yet. There has to be a use-case for this gizmo. A "user story" if you will. Yet, I am going to have to eschew the tough cuts and fancy things up a bit.