Jason Isbell at The Chapel SF 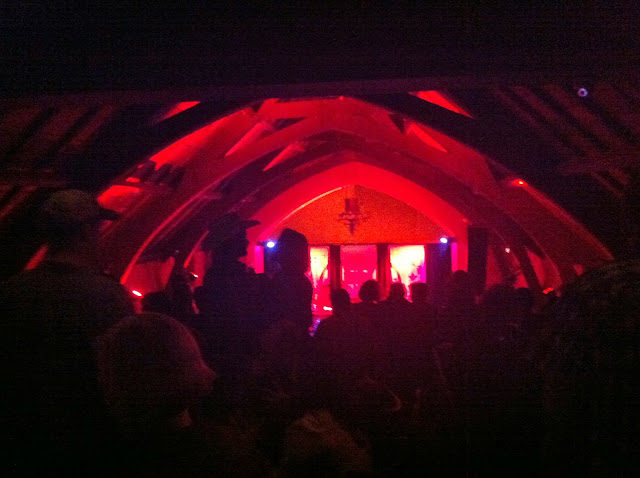 "Start with a joke":

"I'm from Alabama," the man started.

I took notes the other night when I was at The Chapel, watching Jason Isbell play. "Start with a joke," but this post isn't about joking. It's not even about food.

It's about Jesse Greene, and Keite, and Tex, and Farrah, and Emily, and Ronnie, and about a dozen other people who deserve their own posts and who have sublimated into the universe and been taken away from me and others.

"I don't like you," that's what Jesse told me early on when I first met him. I had to earn his respect. He worked as a bar back and door guy at the Kilowatt, but he also built furniture. He built crates that have transported some of the world's most expensive and precious artwork.

When my roommate moved in, he was her boyfriend.

He built my living room table.

I stood at Hoff Street where he lived and took pictures. There was his apartment, and when he fell while he was trying to break in one night (he had forgotten his keys) they took him to the hospital. Thats when they discovered the tumor.

Two times they sawed open his skull, cut away what they could, and stapled it shut. We joked that he looked like Frankenstein's monster.

He had grown to like me - I can be difficult to like. We shared a love of sci-fi and comic books. He was one of the people who hipped me to a band from Alabama called "The Drive-by Truckers".

My grandmother was a gal from Alabama. She left us long ago.

The third time the cancer came back was the last, cancer defeated him.

Start with a joke. "I'm from Alabama," said the man who took my picture earlier.

I was wearing a shirt that said "Science: It works, bitches!" 99% Bittersweet gave it to me for Christmas.

He thought it was a great shirt, and it started a conversation.

"I took your picture because I love your shirt so much."

Not knowing I spend much of my spare time writing about food, cooking and restaurants he procedes to tell me about his favorite brunch spot in Birmingham.

"They had this statue out in front of the bar, a dive bar, and it was colored just like a rainbow flag. They had awesome bacon and eggs. Every friend of Dorothy would brunch there, and there we would be," he motioned toward his husband, "every Mary in Birmingham, surrounded by unknowing red-necks, all having bacon and eggs."

He asked me how I knew Jason Isbell. I told him my friend Jesse hipped me to the Drive-by Truckers, I didn't go into more detail. I told the story about how I met Isbell back-stage in Cleveland and we downed two bottles of whiskey between four people.

Before Isbell got sober, before he was married to Amanda Shires.

Isbell is a uniquely gifted modern song writer: he's a balladier who paints vivid vignettes of people and places using natural, sparse language that allows the listeners mind to wander.


Well I moved into this room - if you could call it that - a week ago. I never do what I'm supposed to do. Hardly even know my name anymore. When no one calls it out it kind of vanishes away. I can't get to sleep at night, the parking lot's so loud and bright. The AC hasn't worked in 20 years, probably never made a single person cold. I can't say the same for me. I've done it many times. Somebody take me home, through those Alabama pines...

"I like this room," Isbell told the audience. Like me, it was his first time at The Chapel in San Francisco.

"I'm not religious, but there's something I've always loved about churches... the ceiling is high, the room is big, and you don't feel like you're so important."

The room in question was in a former life a mortuary and church, located on Valencia Street in San Francisco's Mission District. It opened in October of 2012 with Elvis Costello as the first headliner.

I paid $35 to see Costello's long-time producer and collaborator, Nick Lowe, at the Great American Music Hall that same weekend. Elvis Costello played the opening set and joined Lowe during his encore.

The Chapel is an open room with limited seating, so I made my way up the stairs to try to grab a seat where the church choir would have sat - high above the flock and facing the stage. Conveniently there is a bar, and I grabbed a whiskey and set it on a ledge near a few tables and chairs.

There I met a nice man and his husband who took my picture and told me of brunching in Birmingham.

I wish I could talk about the food at The Chapel. It looked good, passing me by: garlicky string fries, a fish tartare of some sort, diver scallops - certainly an upgrade from The Fillmore or the Great American Music Hall (with it's bizarrely pan-everything menu) or Slim's, with it's disappointing fish and chips.

No - the food certainly looked dressed up, and fit right into the neighborhood: chic, hip, new, young. This is Valencia street in the Mission, San Francisco's restaurant row, and The Chapel is going to make a name for itself.

A guitar makes a sound when a tightly drawn string is plucked or strummed, vibrating the air and sending a note ringing out. Strum the strings together and you have a chord. The vibrations spread out, like ripples of water in a still lake someone has thrown a pebble into.

We are the pebble, thrown into this world suddenly and violently. We vibrate the air around us, we spread out and eventually we disappear but never completely.

At Emily's funeral, a family member reminded us that "eventually we will all be 'just words'". Emily has sublimated into the universe along with Jesse and Keite and Farrah and Tex and Ronnie and the countless others who were real flesh and blood.

That night at the chapel, their ripples filled the room. Strings were strummed and vibrated and amplified and filled the air and danced with ghosts and Jesse was with me, sublimated into the universe but not completely gone.