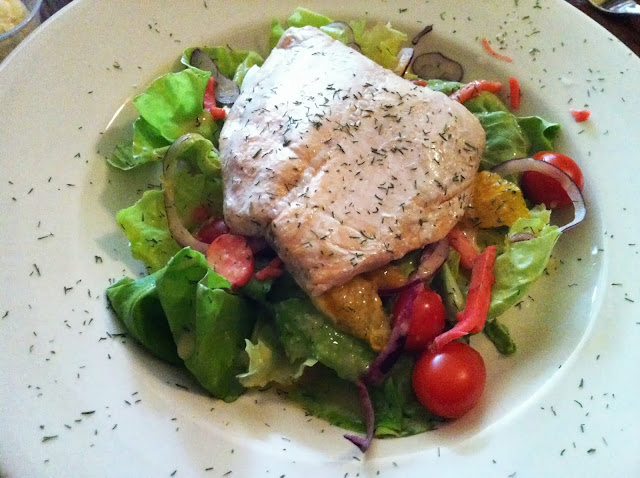 Mid-day at Nighttown one can lose track of time if you are seated at the bar near the entrance off Cedar Road in Cleveland Heights: except for a sparse amount of light from the window in the doorway, the vestibule leading into the bar gets little light, and what decor there is to alight is dark stained wood and a blackened floor.

While this is perfectly fine for pasty vampire types like me (prone to day drinking and blocked-out windows, Radiohead and dark clothing), my old man enjoys getting his vitamin D the old fashioned way. Therefore we were led to a sunny room on the other side of the bar and seated at a two top.

A few tables away, facing the window looking out onto Cedar, the unmistakable brogue of owner Brendan Ring could be heard addressing his staff, including newly minted Executive Chef Nathan Sansone, in an informal lunch meeting.

Do not be surprised to find a cioppino type offering this fall on the menu, a little bird tells us.

I dined on a generous portion of poached salmon on a bed of aggressively dressed Boston lettuce with cherry tomatoes and oranges supreme, sipping on a sweet Muscato from the wines-by-the-glass menu.

Gazing around the room, all etched glass and tin posters from World War II, dark stained wood and allusions to James Joyce's "Ulysses", I allowed my mind to wander back in time to the many occasions I had been in Nighttown without parental supervision - on dates with waitresses and bartenders, foggy from too many sidecars, Sunday brunch hangovers bleeding into afternoon buzzes, crunchy fried potatoes dipped in egg yolk and Hollandaise and "dry white toast."

Timed perfect to the end of lunch, the staff meeting broke up and Mr. Ring spotted my dad while walking by. The two, who have been friends for decades, chatted for several minutes. As always, Ring was ready with a colorful anecdote. 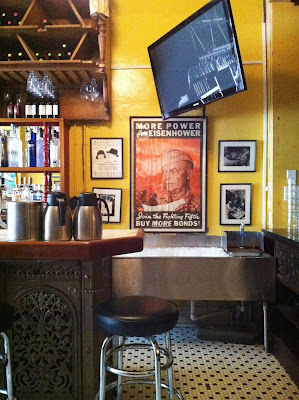 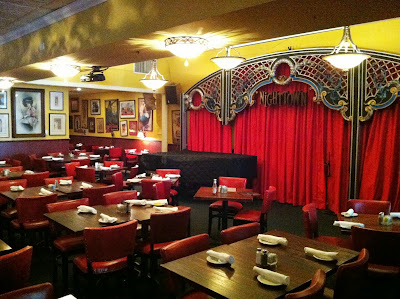 "So, I was down at my apartment in Miami," started Ring, "and I brazenly walked right up to him and asked him if he would play for us here in December."

"TT?" replied my dad, the two where clearly talking in code. "How did that go down?"

"Well, he had sent me a thank you note, you know, for not complaining. He has a pianist that he works with for his live show which I saw at the Lincoln Center last spring, it's just him and the pianist and he tells stories in-between each number."

I figured they must be talking about legendary Broadway actor and musician, Tommy Tune. They were.

"Anyway, he practices almost every day at the apartment, and the former tenant would complain. I hear piano music and I open the windows and crack a bottle of wine. So he sent me a thank you note, you know, for not being a complainer. I see him over by the pool and I walk right up to him and I say 'Mr. Tune, I'm the fellow who doesn't complain, in fact, I like your music. I'd like to book you for my club," said Ring. "And he said yes!"

So keep your eyes peeled on the Nighttown schedule for a special announcement.

The generation of my parents, Baby Boomers,  can claim Nighttown as their own social haunt: a date spot for retirees on their second and third marriages, steaks, jazz and Irish whiskey for the gentlemen, Chardonnay for the ladies.

For a time the restaurant became the cool brunch spot for the Generation X crowd, my crowd.

Once or even sometimes twice a week, for 2-4 hours, we would assemble like a even less coiffed real-life pastiche of Reality Bites, the Breakfast Club and increasingly Leaving Las Vegas.  We would repair the damage we had done Friday and Saturday nights tout de suite with Nighttown's famous Bloody Mary.  Sometimes we'd go straight for the stronger stuff, a "dry white toast" (code for a gin and tonic).

We grew up going to Nighttown, of course, long before we could legally order "dry white toast". Eventually we were old enough to work there - many friends my age incurring more wrath than charm from Mr. Ring (but, in hindsight, probably deservedly so: we were 20-something brats with underdeveloped senses of responsibility or even self during the 1990s).

Still, we kept coming back - and brunch remained the same year after year, decade after decade. There was the Eggs Benedict, of course. That came with the best fried spuds in Cuyahoga County. Sometimes Nighttown would run a brunch special replacing the ham with lobster. There was a duck salad with strawberries and a vinaigrette.

There were classic pub favorites like bangers and mash and more stately classics like the Dublin Lawyer - a dish consisting of mushrooms and lobster in a butter sauce. It's a dish I've never had the courage nor budget to order ("...waitress, I'll have another dry white toast when you get a chance...").

The coffee mugs at Nighttown quoted Molly Bloom ("...and first I put my arms around him yes and drew him down to me so he could feel my breasts all perfume yes and his heart was going like mad and yes I said yes I will Yes...").

Many of those dishes will probably be on the menu at Nighttown until the sun explodes. Recent trips to Nighttown had me noticing new flourishes out of character with the restaurant and bar's Joyceian genes: stewed oxtails and plantains, pork shanks with mashed winter squash and succotash, quinoa, fish tacos, et cetera.

All, or at least a great many (including the fish taco), are almost certainly inspired by Chef Sansone. Perhaps they are intended to lure the next generation of brunch crowds in for their Millennial version of "dry white toast."

Hopefully they don't "86" the Dublin Lawyer, I have yet to give that a try.