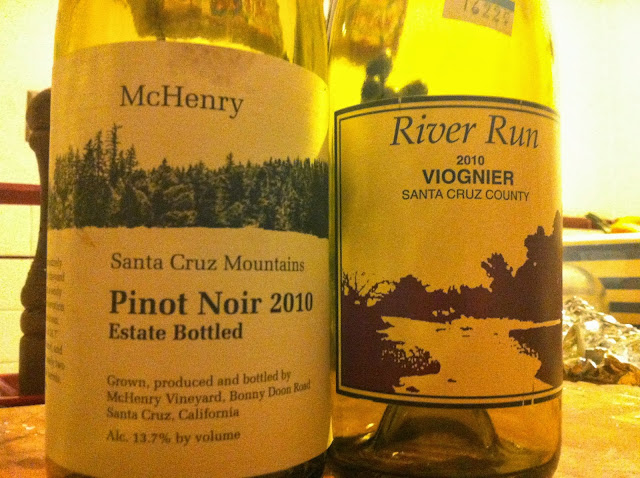 The prospect of writing about wine scares me.

The reason for this is because describing wine is an embarrassing exercise in florid language. Every cringeworthy adjective is thrown around haphazardly when discussing wine, so much so that Dear Leader and I would often break into mocking wine-speak on many a night whilst sitting at our local wino haunt (La Cave du Vin), sipping on a glass of something dark and lurid:

"This wine is fruity, with big nut."

"At the front of the palette it's as if a mime has danced upon my tongue after reading Camus, and collapsed in a fit of ennui."

"This wine is long in the tooth, as if the sweat from Tom Waits' brow revived the fallow soil in which this grape was sown conjuring forth a leathery chord of vines whose fruit gazed balefully upon a silver moon that was both warm and forbidding."

"My cat looked up at me from his saucer of milk with scorn. I knew in that moment that I was alone in the universe. The malbec had notes of nutmeg and cherries, taut with tannins."

Look no further than some actual examples (thanks, wine.com):

"The wine's crisp, elegant flavors of passion fruit, lemon grass and a hint of minerality [sic]  at the end of the long finish are perfect with a green salad topped by Chevre cheese, grilled seafood or sauteed [sic] chicken breast."

"This is a Cabernet that is so enjoyable now and will just get better with time in the cellar. Aromas of rich, polished black fruit, mocha, and spice, followed by fulsome, juicy flavors of blackberry and black cherry, chocolate, plum and cedar, with ripe, smooth tannins and a pleasingly long finish."

Hacks! You should be ashamed of yourself, if you even call yourself a writer, for that prose so purple that it gives you away to EMF. Unbelievable!

"Larry I don't normally pimp wine but this shit is so bomb that I'm going to post it on the site," said I to Herr Masthead. I put the card on the Official Chowbacca! Kanban Board. I was committed.

Now I just had to describe the wine without sounding like a marketing goofball.

The day California wine ceased to be the subject of worldwide derision was the 24th of May, 1976.

On that day in Paris, France, ten wines each in two categories (red and white) were subjected to a blind tasting by a panel of (mostly French) experts.

No one expected the American wines to place in the top three, but two wines from California's Napa Valley took top honors in each category: the 1973 Stag's Leap Cellars Cabernet Sauvignon for the reds and the 1973 Chateau Montelena Chardonnay for whites.

All of this was unbeknownst to me twenty years later in 1993 when I was chugging jug wine (Carlo Rossi, if you must know) with goth kids in the suburbs of Cleveland and Akron.

When I met Riki a few years later at the then nascent La Cave du Vin I would usually drink cocktails or beer. I explained to her that "wine gives me a headache".

"You're drinking the wrong wine," she said after I told her which wines I had been drinking - cheap jug wines. She poured me a glass of 1992 Ravenswood Merlot and blew my mind. It was an epiphany for me, just as the Judgement of Paris was an epiphany for the wine world.

In my life I've been privileged to have imbibed some pretty decent wines.

I am not talking about those high-ticket, decades or centuries old bottles with four and five figure price tags*, but I've certainly had a few bottles that went for a couple of hundred dollars.

Those are special occasion wines mostly at restaurant prices, the caveat is that often a high ticket wine is not much better than a lesser known label for half the price. Take for example Opus One, which in the 1990s would cost you $150 (and substantially more now) in a restaurant for one of their marquee vintages - 1993 was a particularly good year, so the saying goes. Just as good was a wine called Cain Five which sold for less than half the price.

(Both wines are Bordeaux-style blends called "Meritage" - a portmanteau of "merit" and "heritage" coined by California wine makers following the unexpected uptick in sales as a result of the Judgement of Paris in 1976.)

Naturally, the wine snob world caught on and Cain Five's value has come up considerably since then - especially for those marquee vintages.

Branding and labeling probably accounts for most of the price of wines as anyone in the industry will tell you. The wines produced by vintner Mike Grgich definitely benefit from having the name "Grgich Hills Estate" on the label.

Mike Grgich is a Croatian immigrant to Napa Valley who also happened to be the winemaker that produced the 1973 Chateau Montelena Chardonnay that took first place in the Judgement of Paris.

And while his chardonnay can fetch upwards of $60-80 a bottle at the local Safeway, lesser known whites of comparable quality retail for under $25.

The River Run 2010 Viognier from Santa Cruz County is one such wine. According to wine-search.com the varietal was down to a mere 40 acres at it's nadir in the 1960s but has enjoyed a renaissance in the 21st century despite being a low-acidity grape with anemic yields. River Run Vintners produces a mere 1000-3000 cases of wine per year and demand is already driven the price of the 2010 Viognier to $50 from $17, the retail price I bought it at from Rainbow Cooperative (I hope their wine buyer isn't reading this!).

The wine has a "nose" that is a hint floral, a hint citrus and with sweet aromas of pear and caramel. Caramel and pear were also the first notes I tasted across the front of the palette, warm body that spread across the tongue and then finishing with grapefruit and a little heat.

If you can get it for $17 it's a remarkable little wine. I would pair it with stone fruit or a citrus and frisée salad, toasted pine nuts, camembert and apples or even something a little more robust, like pumpkin flapjacks and grilled ham steak (you know, morning drinking).

Similarly the McHenry 2010 Estate Bottled Pinot Noir has enjoyed an uptick in price from $25 (again at Rainbow Cooperative) to about $30 but that is sure to go up as the number of cases drops below 300.

Their website describes the vintage as the winery's best in 35 years, "nearly perfect," and I am not inclined to disagree.

The California version of pinot noir is often too cloying and jammy for my tastes, high sugar fruit baked in the hot summer sun of the Russian River Valley or Paso Robles. However the climate in the Bonny Doon region of the Santa Cruz mountains is given to the extremes that make it more like the pinots noir of the Willamette Valley in Oregon, my favorite region for the varietal by a considerable margin.

The latter are generally more finely structured wines with lighter body and a better sugar to acid balance that allows the grapes subtle floral notes to shine through.

I knew I had stumbled on something very special when I brought the McHenry to my nose, and, I apologize in advance, here are my tasting notes: a definite strong smell of cherries with a hint of chocolate, pine cones and smoke. Blueberries picked fresh from the bush on a hot summer day. A party in my mouth and everyone's coming.

A lighter wine like pinot noir has a lot of range when it comes to pairings. I would be equally satisfied with this accompanying roasted chicken legs and thighs with lentils or pan seared ribeye with roasted garlic and smashed blue cheese potatoes. I would even be so daring as to match with a fishy piece of black cod, crusted with cashews and horseradish with quick pickled strips of carrot and cucumber and a turnip purée.

So get thee to Rainbow before someone who works there reads this and jacks up the prices!

(* For instance, a bottle of the 1973 Chateau Montelena Chardonnay from the Judgement of Paris auctioned for $11,000 recently. Too rich for my blood!)