Gizmos: The UP Band 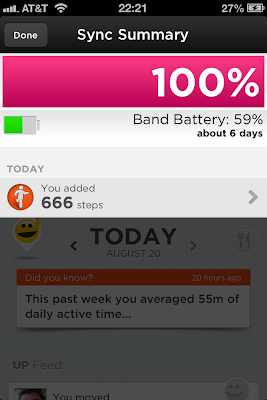 I could tell that Lev Kilun was not impressed with my Up Band, but I continued to explain.

"You enter your age, your weight and your height and it does some biometric wizardry with a built-in accelerometer and calculates your resting and active burn. It even tracks your sleep," I said, showing the previous night's sleep - an average (for me) 5 hours and 12 minutes chunked into segments of 90 minutes, waking, 2 hours and 6 minutes, waking, 40 more minutes of sleep, waking and finally another 56 minutes of sleep.

Then I showed him how you could track your activities and optionally enter your food, "to keep me honest", and showed him a timeline for the month of my intake and burning of calories. Burn more calories than you take in and you lose weight - so goes the only working theory of weight loss in my experience of trying and failing at one fad diet after another.

I showed Lev how the accelerometer tracks your steps, how you can calibrate your step count with a set distance to calculate the length of your average stride. I showed him how this will tell you how many miles you walked in a given day based on number of steps taken.

"Exercise is about oxygen," said Lev, launching into a discussion about metabolic theory that he was surprised to learn we found common ground on. Our conversation meandered through a discussion of Lance Armstrong, the Krebs cycle and then back to this mysterious rubber wrist band that I had been showing off.

"I think my son would be interested in this because he is an athlete, but it is not for me," said Lev. "How much does it cost?" 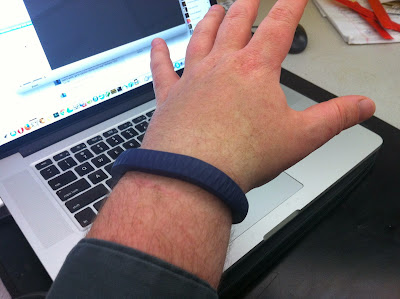 The Up Band retails for $130 through manufacturer Jawbone or on Amazon. The field of competition for comparable products includes FitBit Force (another wristband for about the same money) and the Nike Fuelband ($149). FitBit also has a cheaper entry into the fitness tracker market, the Flex, which is an accelerometer that is strapped to your arm.

Mine came free as part of a promotion at the ${DAYJOB} in the unmistakeable ${COMPANY_COLORS} in which participants were encouraged to compete against a set distance goal over 30 days and compete against one another.

The first of my cow-orkers across the set distance goal of 100 miles did so in a matter of days (they were apparently training for a marathon) but I was not discouraged. I also didn't quite make it to 100 miles - but I did have a grueling day where I slogged my way down a mountain in terrain that was described as "moderate" and I describe as "pants ripping, knee inflaming, ankle killing death march".

While in Cleveland for a week over the summer I compared notes with a friend working at University Hospitals (part of the Case Medical School at Case Western Reserve University) who was fitted with a GoZone pedometer ($24) and given similar challenges to compete against static goals and cow-orkers.

My step mother had heard anecdotes of employees of one company or another being equipped with FitBit devices and given BMI* fat-loss goals tied to their level of health insurance coverage, which sounded a bit Orwellian to me.

* Body Mass Index. This is the standard metric for obesity, however there is a sea-change in thinking that it is possible to be both obese by the standard of percentage of body fat and also be perfectly healthy.

--
We live in a world were we increasingly rely on gadgets and make games of everything from human sexuality to war to politics. Whether it is human nature to do so or a symptom of a societal illness is outside of the scope of the discussion at hand.

However tracking your fitness with a device like an Up Band - and competing against yourself and your peers through social media - makes a game out of fitness that even people like me who don't like working out and have to trick ourselves into doing it.

Fitness comes naturally to some people. They probably don't need a device like an Up Band to goad them into pushing themselves - but might find utility in tracking activities for the purposes of training.

I receive push notifications from an app called "Map My Ride" whenever a friend on the east coast finishes a work out - multi-hour rides of up to and sometimes over 50 miles on what is almost surely a fixed gear track bike. I can imagine him done up in spandex, goggled and toe-clipped into the bike racing along at speeds of up to 25 miles a hour at a sprint.

I ride for 20 minutes at a time on a good day thankful for the revolutionary innovation of the free-wheel that allows me to coast along flat and downhill stretches of roadway and the dérailleur which allows me to downshift uphill - as if my legs, thick as they are from daily use could generate 2000 foot pounds in high gear up a 5º incline, as if my bike chain wouldn't snap.

But there is an element of competitiveness within me that has an eye for my performance, week over week, or keeps an eye on my calorie intake, that catches me tuning my daily goal of 10,000 steps down to 8,500 then, feeling ashamed, back up to 10,000.

(Still, I've set my sleep goal to a realistic 6.5 hours down from 8. I seem to have little control over when my brain decides to jar me awake, coupled with sleep apnea which will improve as I lose weight.)

"Nothing tastes as good as thin feels," said a cow-orker to me un-helpfully. He meant well, but having never been thin I have no point of reference but I know plenty of things that taste great - and I was tempted to correct him, starting with one of Chef Guillermo Perez's favorite "dishes".

Do I need the Up Band to lose weight? Probably not. I was already on my way, slowly but surely. It took waking up day after day not being able to walk up a single hill without resting halfway, feeling winded after a couple of flights of stairs and a couple of non-weight related health scares to get me to start seeing a physician, start treating my health problems and get serious about my health.

That said, as I type this, my Up Band vibrated for a brief moment on my wrist. I have been sitting still for an hour, and it is reminding me to get up and move around.

I can't, of course, because I just passed the Palo Alto Four Seasons and there's another 20 minutes of sitting still ahead of me on the US 101 South, but I'll do a couple laps around the block before I have to chain myself to the desk.

After all, I gotta get those steps somehow.