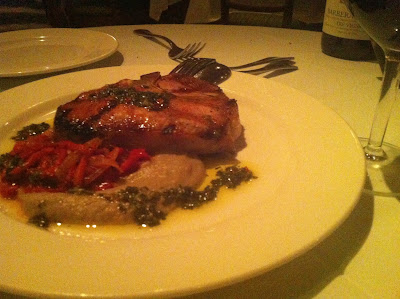 Oliveto Restaurant and Café is situated next to the Rockridge BART Station in Oakland. Rockridge is a neighborhood that is just west of Oakland Hills, a wealthy enclave, and not far from Berkeley.

While the locus of the current San Francisco to Oakland diaspora seems to be centered around downtown Oakland and Lake Merritt, Rockridge is above the fray.

Still, we needed to turn to OpenTable.com to book a late Sunday night reservation. We being myself and a bartender friend. We were seated at 8:15 and promptly ordered cocktails - she ordered a craft cocktail from the bar menu that was the special for that day and I ordered a negroni (like the pot sticker to Chinese restaurants, the negroni is my weather balloon to gauge the quality of an Italian restaurant).

I would have been satisfied with the standard negroni: equal parts gin, sweet vermouth and Campari. Campari once got its nail-polish, Vespa-red hue from a dye called carmine extracted from beetles but has since switched to a vegan-friendly artificial dye (because nothing says healthy vegan lifestyle like a high-octane pre-dinner drink like the negroni). The standard was what I drank on a previous visit to Oliveto with my father, but I could tell that the bartender had upped the ante and was using an amaro instead.

I already was familiar with Oliveto's fine hand made pastas - some of the best I've had on either cost in the United States, certainly comparable to Babbo or Incanto. I had not had the opportunity to take my time to explore the rest of the menu until last weekend. 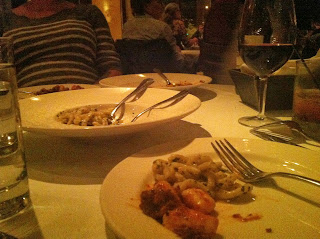 Oliveto has a prix fixe menu on Sundays participating in the "Sunday Supper" program in the Bay Area, for $40 per person (usually paired with a reasonably priced wine - the October 13 edition offered a Chianti Classico "Badia a Coltibuono" 2009 from Tuscany, $48 per bottle).

The menu includes antipasto, primo and secondi courses and a dolce: due of crostini with herbed ricotta and a tapenade; pappardelle with rabbit; brasato of beef, mushrooms and potatoes and polenta; apple cream tart.

Instead of opting for the prix fixe, my dinner date and I opted for a la carte.

Antipasti of a Tuscan pâté of liver on crostini ($11); frisée with avocado and pluots ($12).

Split secondi of charcoal grilled pork porterhouse with a peperonata and eggplant purée and salmoriglio ($31).

Meanwhile, my little sister is texting me in excited bursts about scoring a job as a sommelier in a Manhattan restaurant (I won't say which, yet, lest I be accused of nepotism). So we put her to work relaying the wine menu choices to her over SMS.

That we both chose the Nebbiolo to accompany pasta and main course is, I would like to think, a testament to my better-than-most skill for wine pairing. The bottle had been 86'd, but my runner up, a Barbera D'Asti ($36), was no slouch. 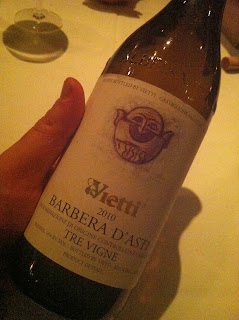