Well, The Fall is here so it's time to Hit The North while we can because Winter Is Coming.

Seriously folks, I'll be here all week. Don't forget to tip your cocktail waitress and the 11 O'Clock show is different from the 7 O'Clock show.

Yes, it's once again this blogger's favorite time of year. It's Decorative Gourd Season, motherscratchers!

I don't know if I can necessarily blame Starbuck's for originating this most unholy of traditions, but I can credit them for popularizing it - I speak of course of the Pumpkin Spice Latté.

Listen, this is a free country (supposedly), and you have the right to choose which soul-less* corporation will own your ass at the end of the day, and I reserve my right as a 'Merkin to mock you for it.

Save the cinnamon, nutmeg, mace and clove for pies. As Dennis Leary is fond of saying, I prefer coffee flavored coffee.

Riffing off that same jazz (daddy-o), while it is conceivable that it is possible to make a delicious "pumpkin flavored beer", in my many years upon this Earth I have yet to encounter one.

And yet, millions of gallons of the stuff gets bottled every year, so someone is drinking it.

* Corporations are people too.

(An oldie but a goodie... Erich Lasher on flavored beer:


Behind the Bar: Flavor Trip from Ohio Authority on Vimeo. ) 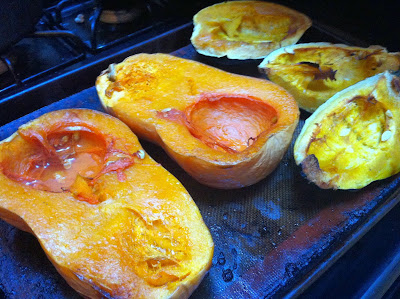 "But what," you ask, "are we to do with all of our decorative motherfscking gourds?"

I like a pastiche of squash - from butter-nut, to spaghetti, to the noble pumpkin the king of the decorative gourds. Some are sweeter, some are more nutty, some have more water, some less. Breed accounts for some of this, as does terroir. An Ohio pumpkin will taste different than a Massachusetts pumpkin or an Oregon pumpkin or a Texas pumpkin. Patch by patch, county by county.

That's the fun thing about food - or it should be. How's that pumpkin spice espresso beverage taste? The same at every corporate coffee outlet? 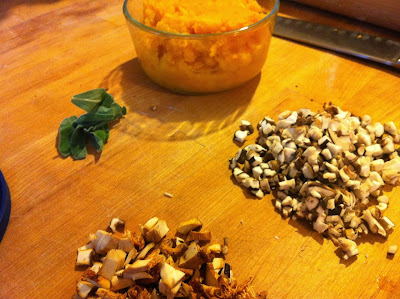 To Peel or Not To Peel?

I say don't, because I am lazy, There will be time to peel once the roasted squash has cooled down, and the job is much easier. I have mutilated myself more than once trying to cut the rinds off a raw gourd or two.

...And I like to think I have somewhat decent knife skills.

So let the oven do the work. 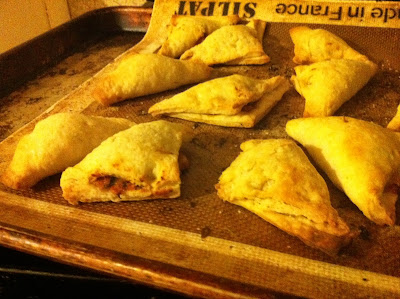 Basic Squash Purée:
That's it, no salt, no herbs, no spices. Just a little oil and slow, low heat.

Carefully halve your squash - the technique I am using is to embed the hilt end of my chef's knife into the root end of the squash and then with both hands banging the squash against a stable surface (counter-top or a stationary kitchen island) until the squash splits lengthwise. You can also hack away at it with a serrated bread knife, but be careful as this is a good way to lose a finger.

Using a metal soup spoon, remove (and save, and roast!) the seeds.

Rub with oil inside and out and place the gourds flesh-side down on a silicone mat laid on a half-sized double-walled cookie sheet.

I start in a relatively medium-heat oven at 350ºF and turn the heat down to 275ºF after 45 minutes. Then you can roast for another 1:15, at which point you want to flip the gourds to skin-side down and return to a 425ºF oven for another 20 minutes.

Revel in the delicious smell of roasting squash! Does it remind you of something? You should be smelling hints of caramel, cinnamon and nutmeg. That's just the fruit itself, sans any sort of accoutrement.

That's where "pumpkin spice" comes from - that bouquet that naturally lays locked in the fruit until you free it with heat. Those notes are highlighted by the aforementioned aromatic spices - clove, cinnamon and nutmeg.

When the squash is cool enough to handle, peel the skins and mash with your hands - or if you have a food mill you could use that to push through the pulp while leaving the skin behind (although our "test kitchen" has had varied results with versions of the latter method).

Squash Ravioli With Mushrooms and Herbs in Brown Butter Sauce:
On a heavily floured cutting board that can accommodate 10"x20", lay out a sheet of pasta and spoon out the filling evenly in three rows of six columns, leaving about 1/3" between each dab and the outer edge of the pasta dough and 2/3" between each row or column.

Using a pastry brush or your fingers, wet the dough between and around each dab of filling with water.

Carefully position a second 10"x20" sheet of pasta to fit over the first.

Using the edge of your hand, press down on the dough around the dabs of filling, starting in the middle and working your way out to ensure that no air is trapped between the sheets. When all looks well, use your finger tips to press down on the areas where the two sheets touch.

Using a pizza cutter, divide into individual ravioli. For circular raviolis you can use a ramekin or a clean used soup can.

Dust with plenty of flour and allow raviolis to air-dry slightly on a floured cookie sheet - you can place this in the freezer or refrigerator to accelerate the drying process.

Fresh Pasta Dough:
The wine is to add a little zip to the dough, and the milk to to soften it; the milk contains fat, sugar and protein, all of which join forces with the proteins and fats in the eggs.

You can hand mix a small batch (half a cup of flour to one egg yolk give or take), but I'm using a Kitchen Aid stand mixer to work my much larger batch. Really work it, in low gear, for several minutes to stretch and pull the gluten from the flour and moisture in the liquid ingredients.

The end result should be a smooth dough that is not sticky. Place this in a freezer bag and refrigerate for at least an hour before rolling it out. Freeze whatever you don't use after 3-5 days.

Obviously you can futz around with the ratios all you want, or use a different cheese, or skip the mushrooms, or add cooked ground meat, etcetera ad absurdum.

Duxelle of Mushrooms:
Dry-fry mushrooms in a very hot pan with a pinch of salt until they begin to brown and sweat.

Add butter and heat until it begins to foam and add shallots, sage and olive oil.

Deglaze with wine and scrape up any brown bits stuck to the pan. Reduce until liquid is almost gone.

Spoon 2 tsps of filling into 2" squares of pie dough and fold over to form a triangle. Press down edges.

Pie Dough:
Using a dough cutter or balloon whisk, cut the butter into the flour until it forms pebble sized grains. Add white wine while mixing and carefully work the dough into a mass.

If you overwork the flour your dough will be tough.

Transfer to a freezer bag and refrigerate for at least an hour prior to rolling it out on a heavily floured surface.

Roll in stages, initially pushing the rolling pin into the dough to spread it out. Allow the dough to rest for a few seconds each time you flip or shape the dough into a sheet.

When you have reached the desired thickness, trim the edges to create a uniform rectangle.

Use a paring knife to mark off squares into which you will spoon 2 tsps of filling.

Empanada Filling:
Mix with a spatula until uniform. 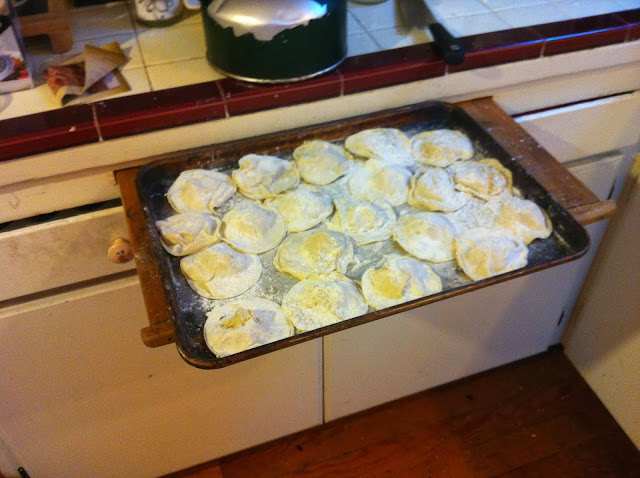 Here's some other ideas for your pumpkin paste:


Pumpkins are more versatile than most people imagine, but please keep it out of the coffee and the beer.