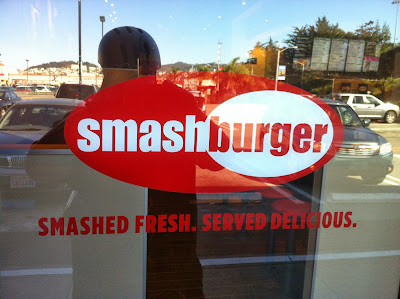 While Potrero Shopping Center lacks a carnival atmosphere (unless you are trying to buy booze there just before the state mandated 2AM limit on a Saturday night), the dodge they are playing at the recently opened Smashburger is the same short-con that grifters have been playing on unsuspecting marks since the first cave man reached for something shiny: the bait and switch.

It pains me to write a bad review, but Smashburger really earns this one. Before I go any further I would like to mention that this is due in no way what so ever to the staff, who were friendly and helpful and answered all of my inane bloggy questions and tolerated my picture taking.

They are blameless young people and likely they will aspire to better things than corporate meat-in-bun shilling. That said I shudder at the corporate propaganda they must have endured during their employee orientation ("...the culture at Smashburger is different! Smashburger is fun to work for! Smashburger great! Recruit friends! Mongo smash!...").

Of course, corporate culture is an alternate reality and - trust me on this one - middle and upper management are often divorced entirely from reality on the ground. This is why it came as no surprise to me when it was revealed recently that a McDonald's training video urged its minimum wage employees to "get another job."

It is likely that the teenagers and young adults working at this particular Smashburger will not remain stuck in the job. Contrast with the McDonald's down the street where the employees likely have to work a second job to survive - through no fault of their own - and will likely remain stuck in the same economic strata for the rest of their lives because America has abandoned notions of fairness and economic justice. Instead, we have the current klepto-plutocracy which is going nowhere soon.

Remember that when you are ordering a Big Mac meal at 1AM in your Mercedes, 1%-ers.

(Can you tell I've been listening to Billy Bragg recently?)

Speaking of poor people, Planned Parenthood provides vital, life-saving care to disadvantage women and families. They have been run out of the areas they are needed the most by terrorist - right wing Christian terrorists - because they support birth control and healthy sexuality, because they give out free HPV vaccinations, and because white Christian men are afraid of the vaginas they came out of. So fuck the Komen Foundation for withholding funds from Planned Parenthood.

No, I won't be ordering one of your pink milkshakes to help end breast cancer. I don't need the extra calories anyway.

Let's get back to the original premise of this post: namely, Smashburger is a bait-and-switch con.

Of course I don't mean that Smashburger has done anything illegal. Serving a mediocre hamburger is not a crime, no matter how many of us think it ought to be.

Now that I have given myself legal cover from Smashburger's army of lawyers, let me explain what I mean.

The value proposition of Smashburger is that it is a fast-food burger with class. Smashburger is looking to cash in on consumers who want to think of themselves as chic, metropolitan, discerning.

Words like "truffle", "ciabatta", and "arugula" come into the picture - all things I like, because they are good not because I feel like I am somehow classier for having knowledge or better yet are a consumer of them. These three items, plus something claiming to be Swiss cheese, appear on the description for the "Bay Burger", the burger I ended up ordering on my visit.

Naturally, I run the risk of sounding like a snob. That's fine, I am a snob. When I say that truffle butter, truffle oil, truffle salt and in Smashburger's case, truffle mayonnaise often contains the smallest possible trace of actual truffle (and instead large amounts of "truffle flavor" attained from extractions of cheaper mushrooms and ${DEITY} knows what else), I say so in deference to the love of good food.

Save your money and get the real deal (or don't, we all have bills to pay) - but don't be swayed by the delusion that a $6 burger contains any meaningful amount of truffle nor even approximates the experience.

The arugula was limp and dull. The life had long ago drained out of the greens, which were probably bagged in cellophane sacks filled with inert gas and shipped all the way across the state (or perhaps, and shame on them if so, from Arizona or New Mexico or even Central America). Of course it's summer in California and so there's no reason to believe that the greens aren't from Ventura or Paso Robles or San Joaquin or somewhere else. From the flavor, there's plenty of reason to suspect the greens were grown in a giant greenhouse.

Adding insult to injury, my side salad came topped with machine grated generic orange cheese. Do not even get me started on the sub-par quality of what passes for cheddar in the supermarket, suffice it to say that grating the stuff and transporting poses some engineering problems - problems that are solved with the addition of a fine dusting of food-quality powdered silicate to prevent the cheese from "clumping".

The website says "made with all-natural™ ingredients" (™ added). Sounds "truthy" to me!

(And just what does "angus" mean anymore, anyway? You can get an "angus" burger across the street at the - again - McDonalds.)

Similarly, I know what a ciabatta bun is and what Smashburger claims to be a ciabatta roll falls far short of the mark - the bubble structure was all wrong and the crust lacked the crunch and the crumb lacked the chew. I understand that these are probably factory made en masse, but my point is that if you are selling me the idea of "ciabatta" and "truffles" you will have to do better.

Not that my hopes were high as soon as I encountered the wall-of-video monitors.

I pretty much knew what was coming.

I was on the second or third joyless bite of my overcooked, under-seasoned burger when I noticed the video on the flatscreen demonstrating the Smashburger pragma - the raison d'etre, if you must. The canonical "smash burger" technique silently played out on a plasma screen over and over, all day and all night.

What is a "smash burger", you ask? Why is it different that other burgers? What is so special about it? Well you see, the canonical Smashburger is a burger made by smashing ground beef with a hand-held press onto a very hot flat-top griddle.

The juices are steamed throughout - supposedly - and a delicious crust is formed on the bottom edge. Just flip, finish cooking, and serve.

Overcooked I can tolerate - l'gouvernement des infirmières dictates that no person shall ever risk food-born illness by eating anything that might be even a little undercooked (and certainly, in these times, one eats "medium rare" at a restaurant at one's own peril). Under-salted however is a crime which must not stand.

Furthermore, why the theatre? Oh... right, I am being sold a bill of goods that is more flash than substance.

Griddle burgers are as old as time. The classic diner burger uses a similar method (without the flashy "smash" silliness): place raw burger patty on a hot griddle, fry up one side in it's own fat and form a nice crust, flip, finish, serve.

Sometimes... and I think this may be where we are getting the song and dance from ...a line cook in a hurry will splash the burger with water from a squeeze bottle and put a steam lid on it to quicken the cooking time. The lid traps steam, the steam cooks the burger, all that's left once it's 80% done is to give it a flip, get a little color on the other side and serve - presentation side up (that's the side that went down on the griddle first).

There are thousands of diners across the country that do this and do it better than, apparently, Smashburger in Potrero Shopping Center does.

In-n-Out most certainly uses a similar method, and their burgers are better by a wide margin. 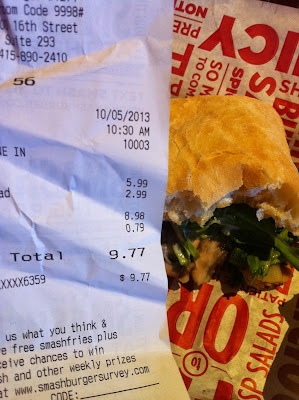 The standard refrain is that you get what you pay for, and most certainly at Smashburger. Do not be fooled: this is not a luxury burger, and while it is a step up from McDonalds or Burger King, not by much.

In fact, a better burger can be had at In-n-Out or Wendy's.

For a few more dollars, you can walk down the street to Whole Foods on 17th and get an excellent burger that is a proper medium rare made with ingredients that aren't just "all natural™" but actually organic, actually conscientiously raised.

Of course you can, and should, eat meat sparingly.

One thing is certain: I will be sparing myself from Smashburger from now on. Best of luck to the nice young kids working there, but your company's product is a lot of dressed up hooey.

Post-script. There are people I know who insist that these burgers are great. "Give them a second chance," they tell me.

No. Smashburger doesn't get a second chance. They are relegated to the same silo in which Togos and Jamba Juice reside: the silo of mediocrity.

Nice try, but no.