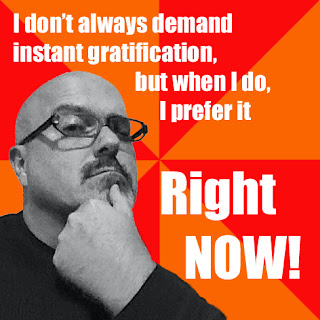 His favorite meat preparation is "at once".

To him, animals are merely tasty, ambulatory plants.

He could kill his own dinner with his raised eyebrow, but prefers to have a drink at the bar instead.

He is THE MOST INTERESTING UNREPENTANT CARNIVORE IN THE WORLD because MARKETING!


*ahem* So, the other day I had a hankering for BBQ ribs and no time to attend to them. Well, why not just roast them and dip them in sauce? All that I had in the freezer were pork "not ribs", but they were fatty and calling my name.

I put them on a baking sheet I'd coated with vegetable oil, salted them, and then popped them into the oven at 250 degrees for a couple of hours until they'd reached a safe temperature. It's not *exactly* instant gratification, but the effort-to-result for the meal pictured below was fantastic. Serve with your favorite sauce for dipping. Like the man says, "BAM".