How To Cook A Wolf 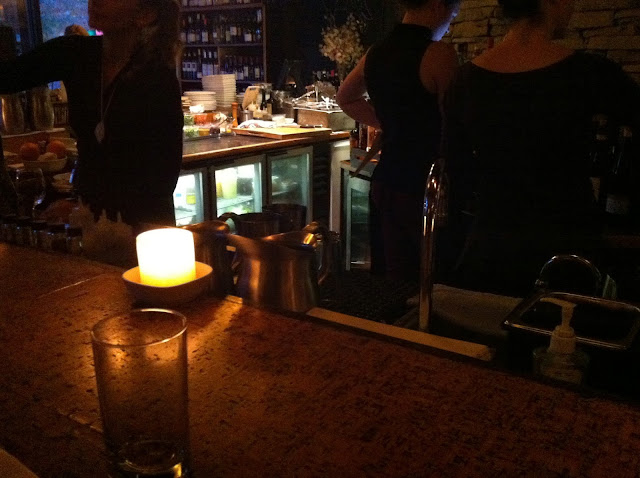 No, this is not instructional post. How To Cook A Wolf is in fact the name of a restaurant in Seattle's Queen Anne.

It's where I was for dinner one night while I was "seeing another stylist" (sorry, Erik). You see, I needed a haircut and here I was in a foreign city. The stylist, a comely brunette named EJB, sheered through my mane with precision and aplomb, so naturally I had to poach her from her salon and show my appreciation by buying her dinner.*

Of course, I get the feeling that I should be referring to the restaurant as Ethan Stonewell's "How To Cook A Wolf." You know, like Bram Stoker's Dracula or perhaps Stanley Kubrick's The Shining.**

Despite the hilariously long name (are we an emo band on top of being a pretentious movie?) the food and drink is pretty tasty.

How To Cook A Wolf is essentially a tapas and cocktails bar, with a decent selection of wines by the glass and a more expanded wines-by-the-bottle menu. Small plates feature Pacific coastal (and in particular Pacific Northwest) interpretations of classic Spanish tapa and Italian antipasti:

We started out with the above small plates and two giant craft cocktails served up in 12-ounce cocktail ("martini") glasses.

I would have asked for mine to be served over had I known, or at least in a large tumbler. The cocktail stemware I do prefer is of the old fashioned variety - saucer-like cups on stout stems, a low center of gravity. I've broken too many cocktail glasses to count, whereas one attends to a long-stemmed glass of wine with more care.

Of course, the restaurant cannot be faulted for my stemware proclivities and lack of grace.

Suffice it to say the glass was brimmed with "the good stuff" and one cocktail was enough for EJB.

I had a glass of a Willamette Valley pinot noir to go with our main dish of gnocchi with lamb Bolognese: a sturdy example of the form with toothsome dumplings and a shaving of hard cheese.

One or two dessert items caught my eye watching others order them but by that time both me and EJB were stuffed - those "small plates" add up. I ordered an amaro and she had an espresso.

Dinner, several small plates and a shared entrée plus cocktails and a glass of wine: about $100 plus tip.

(* Also, I've known her for about 15 years, since she was a wee little thing!, and this was our one and only chance to catch up during an abbreviated visit to the Emerald City. I don't want my regular stylist to think that I am disloyal, although I have to admit, she's prettier that you are, Erik. )

(** If you have any doubts that the moon landing was faked, watch this! And if you still have doubts, you're probably not crazy. )