If 3AM is morning, then pizza is for breakfast:

Sizzle Pie, whose flagship store is in the southeast (or "lower East side") of Portland, is the yin to Apizza Scholls' yang: it is a chain with three locations, it caters to a late night crowd staying open well past last call, it gleefully violates every purist dictum about what belongs on a pizza (much like Voodoo Doughnut thumbs its nose at doughnut conventions) - often piling on ingredients in the pizza version of the "culinary clown car."

Like the Portland locations, Sizzle Pie in Eugene on Willamette Street has a full service bar, but I have never once set foot in a Sizzle Pie before 2AM (Oregon's "last call" is 1:30AM, drinks are pulled at 2 just like California).

So what I am saying here is that I have never set foot in a Sizzle Pie sober, which both works for and against them in terms of reviewing the restaurant.

If Apizza Scholls is the top of the form of "pizza", Sizzle Pie excels at being really great "drunk food." But generally speaking, "drunk food" is not "good food" and in terms of the quality of their pizza judged against the field, Sizzle Pie pizza falls flat (pun intended).

What is appropriate music for a pizza joint in Eugene?

A "Police and Thieves" pizza has spinach and mushrooms. When you step up to the display case and register after a night of drinking you can either order a whole pie, any one off the menu, or order by the slice. When you order by the slice you are at the mercy of whatever pies the restaurant decides to put out.

"Police and Thieves" caught my fancy, so I stepped up to the 20-something gal running the register and said to her: "I'll take one of the Junior Murvins."

"The Clash?" I tried, adding, "no one listens to roots rock anymore?"

The 20-something gal continued to blink at me.

"Sorry, I'm talking about the Police and Thieves," I said, unwilling to take it further by listing any of the many bands that have covered the classic reggae track that Murvin and Lee "Scratch" Perry produced in Jamaica in 1976. "And I'd like a slice of pepperoni as well."

Eugene, Portland's dorky younger sibling, could be forgiven for this lapse. Aggro rock blared over the house sound system - it might as well have been Nickleback - so I understand that maybe a U of O student doesn't have any version of Police and Thieves in their internal repertoire (Built To Spill does a pretty good cover of the Clash covering this song that they toured with during the There's Nothing Wrong With Love tour).

"You know, this pizza is not very good," said my friend S, a friend of my host Meenk. We were sobering up.

The music crescendos with several tracks of the 1990s The Bloodhound Gang (a meta-reference to an episodic serial about crime-solving teenagers within PBS's 3-2-1 Contact), mercifully ending abruptly after the first chorus of the song "The Lap Dance Is So Much Better When The Stripper's Cryin'".

S's boyfriend finally showed up after closing the bar, freeing Meenk and I to escape.

I stripped my outer layers of clothing off and flopped limply onto Meenk's couch, like a slice of Sizzle Pie, and drifted off into dreamless boozy sleep. 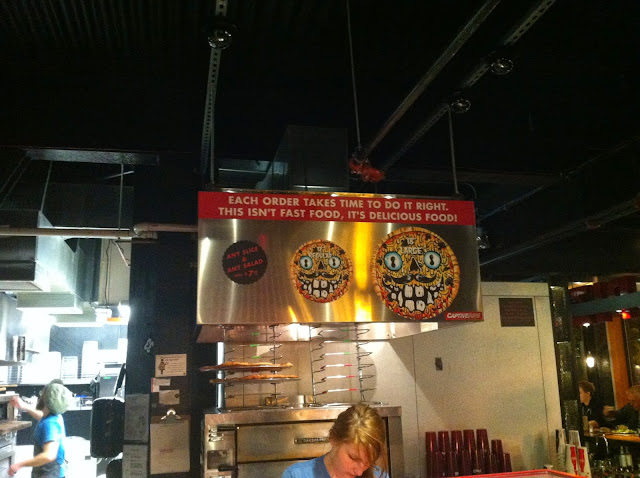