The label said "Pork Coppa Roast," but I swear the butcher called it by it's French culinary label: echine.*

Here's a handy chart!
I had landed at Seattle-Tacoma Airport through a blanket of low clouds and I had availed myself to several complimentary cocktails during the one hour and thirty-five minute flight, as well as an hour of Star Trek: Into the Darkness (no spoilers! I shall finish that on the Amtrak... having seen the original I'm pretty sure I know what's coming).

Naturally, this is the best state to find me if you are my older sister, because I will be open to suggestions of "do you want to check out the butcher?" and "let's stop into this wine shop before we go back to the house."
I contend that no duck were harmed until the moment of their slaughter, so my conscience is clean (and my wallet empty) after splurging on foie gras. 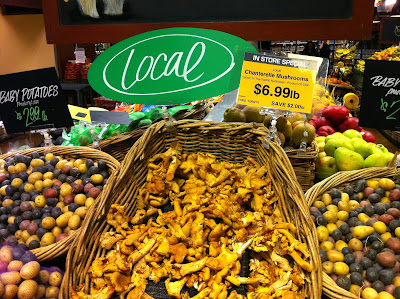 A final shopping detour netted some obscenely cheap chanterelle mushrooms ($7/lb, can you believe it?) and the barest provisions (sister and brother-in-law were heading to Central America later in the week); wheels down at 16:35, supper on the table at 21:30.

A belly full of rioja and something called a "West of Brooklyn," and it was off to slumber under grey Seattle skies.

Saturday morning saw a poached egg, salad of savoy cabbage and some seared foie gras** (suck on that, PETA). Too many cups of coffee, everyone in their own corner of the house writing or reading.

Being a nerd is not simply bred into our DNA, it is our family birthright.

Mike, my brother-in-law, rolls with the punches and gets almost all of my references to Doctor Who fandom. Prior to he and my sister's current obsession with fútbol (I shall not use the "S" word), The X-Files would preëmpt any major sporting event.

"Interesting, the location for this episode that is supposed to be set in Northern Virginia looks suspiciously like the Pacific Northwest to me," said Mike one Thanksgiving. SyFy (né The Sci-Fi Channel) would run a marathon of fan favorites every year, and whenever all the siblings would gather sans parental supervision The X-Files was watched with all the decorum of a Southern Baptist Revival (that is to say, whilst sneaking drams of fire water and hootin' and hollerin' - "don't go in that cave, Mulder!").

Reading, writing, and cursing the name of Chris Carter for shipping Mulder and Scully against the immutable laws of television show running eventually works up an appetite and by mid-afternoon it was time to have a sandwich, wherein we returned to The Swinery.

The Swinery is a butcher and has lunch and brunch service, offering hot sandwiches to go or to dine in on a patio next to the store.

The menu features some creative twists on the classics, like the BLT pictured above.

The Swinery also stocks "craft" soft drinks from Dry Soda, I had a Juniper Berry soda to accompany my BLT which was remarkably like drinking a gin and tonic with all the fun parts removed. Juniper is of course very astringent so this isn't a soda for everyone, but I don't mind a bit of bitter with my sweet.

My primary care physician would be happy to know that the walk to and from The Swinery is about a mile, round trip, so I worked some of those calories off.

(** One study suggest that a diet that includes lots of green leafy vegetables, red wine and foie gras may contribute to the longevity and ironic resistance to coronary heart disease scientists have observed in people living in the south of France. ) 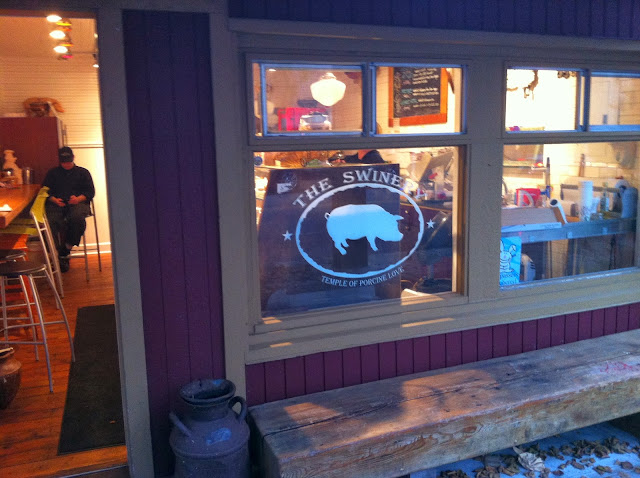