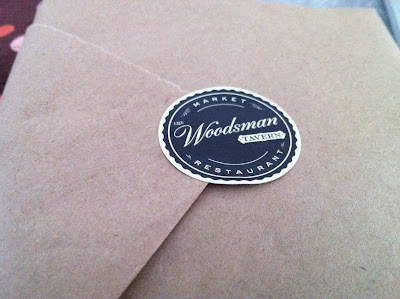 "If you want to pack some stuff for the train ride, you should go to the Woodsman Tavern deli across the street. And they have foie gras paté!" said my host to me on the last day of the Portland, Oregon leg of my tour of the Pacific Northwest.

Bringing food on the train is the last hold-out of it being a more civilized form of travel. Certainly you can bring food on an airplane but it's impractical to smuggle food through airport security and the offerings in the DMZ are usually the most lacking of lustre. If there were a Woodsman Tavern Deli in SFO I would go there every time.

Of course, you can get more than just cold cuts, cheese, bread and a little paté with some apple butter. The train was still hours in the future, my immediate need was a sandwich of some sort.

Normally I'm not one for clever variations on classics. The reason is years of living in California and boiling with rage (and perhaps a touch of hypertension) watching people mutilate classics like the pastrami sandwich with avocados or Dutch crunch bread.


Me: "I'll have a pastrami on rye."
Typical California Deli Worker: "On what kind of bread? We have sour dough, Dutch crunch, whole wheat, ciabatta and rye."
Me: "Rye. I already said rye."
Deli Pogue: "Sorry sir we are out of rye."
Me: *deep sigh* "Okay, whole wheat, toasted."
Deli Fascist: "I'm afraid we can't toast today." (must be something with the phase of the moon or a Scientologist high holy day)
Me: *under my breath* "For fuck's sake," *louder* "Fine. Pastrami on wheat. Mustard, no cheese."
Deli Asshole: "What kind of mustard... we have..."
Me: *looking at available mustards in front of me, cutting off deli weenie* "Brown. Give me the brown mustard."
Deli Person-who-is-about-to-die: "Would you like anything else? Mayo? Lettuce? Tomato? Avocado?"
Me: *seriously about to lose my shit* "No. Pastrami. Wheat bread. Brown mustard. Period. Thank you."
Deli Person: "Very good, next in line?"

I wait at the counter steaming while the hippy behind me orders a turkey "ruben" on Dutch crunch with avocado, hold the thousand island. I contemplate sneaking back in at night and setting the place on fire as I get a thin sandwich with lean pastrami (that might as well be turkey meat) on untoasted wheat bread. I wonder if there is any beer at the office.

That said, the special of the day at Woodsman Tavern that afternoon was a twist on the ruben (and thankfully they didn't sully the name "ruben" by calling it a "ruben"): corned beef with "cheesy leeks" on grilled whole wheat sourdough.

This sandwich was an homage, not an abomination, and I would go back and eat it again and again.

A while later and it was time to take the train from Portland to Eugene. Here I met the "Amtrak Beer Club" (a story for a later date**) and dined on cheese and bread and beer.

Believe it or not, I actually managed to lose weight on this trip - although walking all over Eugene, Oregon and raving until dawn may have had something to do with it. Also stories for a later date**.

A final note on the Woodsman Tavern is that we never did visit the Tavern part, just the adjacent deli. There is an adjoined restaurant and it looks fantastic. But that will have to be another trip to the Pacific Northwest.