Meet You At the Crossroads: Best Steak & Gyros 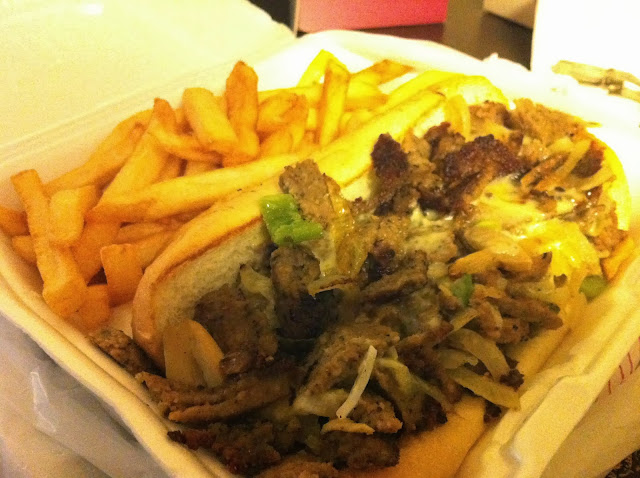 The gyro is the bacon wrapped hot dog of Cleveland.

Just as local vendors push carts equipped with propane heated griddles around the Mission on any given night serving bacon-dogs (I'll take mine with greasy grilled onions and a jalapeño, por favor), the gyro cart was a ubiquitous fixture of Cleveland nightlife in the long-since defunct Flats District - a carnival of punk venues, drunk bros and frat partiers, sidewalk barfing and debauchery come rain, sleet or snow (often all three in the same night).

A series of accidental drownings of revelers in the Cuyahoga River on the heels of several successful sting operations targeting drug rings offering ecstasy and cocaine doomed the district going into the aughts. The shutdown of one venerated venue after the other followed until the whole strip was reduced to a ghost town dotted by a few stand-out union bars still selling dollar tacos to pensioners and $1 bottles of Straub.

The gyro vendors moved to greener pastures in the City of Cleveland (namely, Cleveland State University) and that's as far east as they went. Those that lived further east would have to stop into one of the many chains that serve northeastern Ohio's favored drunk food.

That's exactly what Xe La and I were attempting one crisp November evening recently on the way from a late night at the Grog Shop to home, but the Steak and Gyros on Meadowbrook and Lee Road was already closed for the night.

We were determined, but this meant that we had to leave behind the relative comfort of the Cedar-Lee corridor and make our way into Bone, Thugs 'N Harmony territory: Best Steak and Gyros on Euclid and Forest Hills.

The crossroads of "in the cut" and "delicious."

"Man, look at this shit," lamented Xe La, "they can't even afford street lights down here."

We sped down Forest Hills Road, Forest Hill Park to the east and Lakeview Cemetery to the west. It was indeed dark out, Xe La's headlights illuminating tall groves of oak, maple and beech on either side of the road shedding the last of their leaves. It was not hard to imagine the spot as being well laid out for an ambush: the road dipped into the nadir of what was once a ravine in the darkness, finally spilling out onto one of the main thoroughfares of the east side of Cleveland, Euclid Avenue.

"Just keep cool and if a dude selling DVDs asks you what's up let me talk," said Xe La, playing up the drama of an excursion into East Cleveland after bar time. "A lot of folks down here are pretty desperate."*

"This ain't my first rodeo, Alex. Remember I lived down here with HM and CP back in 95, off Hillcrest." Still, I felt a little bit of a stranger in a strange land.

I was desperate for something greasy to soak up the whiskey, belaying any reservations I may have had.

After a few seconds of staring blankly at the menu the man behind the bullet-proof glass interrupted my reverie.

The sandwich is named after the cheese-steak from the City of Brotherly Love, but is the mad-genius creation of the locals: sautée peppers and onions, provolone and gyro meat on a grilled hoagie bun with a side of fries.

"How y'all doing?" said the large man selling the DVDs.

"You know, getting something to soak up the booze," I said ignoring Xe La's caveat. "What sauce do you recommend?" I asked, motioning toward a plastic bus bin filled with unlabeled squeeze bottles.

We made our introductions and discussed BBQ sauce for the intervening minutes. A young couple came in, stroller in tow and ordered. Another man near the door watched benevolently as he labored away on an older laptop, muted sports highlights flickered on flat screens mounted on a pipe coming out of the drop ceiling. A radio tinned out Motown over the hum of fluorescent lighting.

B tells me the BBQ sauce is made in store and I believe him: the east side prides itself on it's BBQ sauces, usually a sweet, tart patois of Carolina and St Louis styles.

Order up. "Y'all want to buy some DVDs?"

"Thanks, but no thanks. Thank you for the sauce tips though."

The trees looked majestic as we snaked back up Forest Hills Road.

I got home and tucked in. As predicted, the local advice regarding sauce was good - enough heat, sweet and smoke to accompany the unfathomable gut bomb I was about to shove into my face.

* This is a fact, and is very poignantly pointed out by The Wire and Tremé show-runner David Simon in this speech.