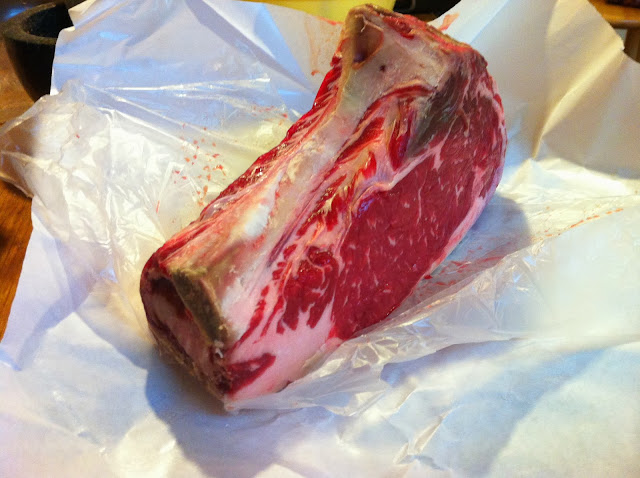 I knew I wanted steak for Christmas Day but I wasn't sure what kind and how much until I got to Olivier's Butchery in the Dogpatch on Christmas Eve Day, right around 12:45 with a line already coming down half a flight of stairs and spilling out onto the sidewalk on Illinois Street.

Halfway through the line, Olivier himself descended the staircase dressed in his white butcher's overcoat urging us in line to move to the side. Moments later he reappeared with a side of some animal (we're thinking lamb or goat, possibly veal) slung over his shoulder - in all easily 150 to 200 pounds of meat - and marched nonchalantly up the stairs and back into his work area to break the primal into salable portions.

I would be feeding a handful of people - the roommate, her boyfriend, stragglers who may wander by. Finally I was at the head of the line, the front of Olivier's house attended by his wife and a couple of assistants. A young woman in a maroon chef's coat asked me what I'd have as we both walked over to the display refrigerator to survey the wares.

Olivier's features a full line of traditional French style butchery - côtes du bœuf, filets mignon, faux filet, entrecôte, cailles farcies, cuisse de poulet and onglet. Olivier's often stocks more rarefied cuts of offal including beef liver, hearts, tongue and cheeks. I think the heart is a good, beefy cut that you must either just barely cook or braise for a great deal of time; the tongue and cheek are near and dear vehicles of braises as well. I find the liver to be where I begin to draw the line, the strength of it's organ flavor and it's snappy texture being a bit too much for me.

I picked up some cailles farcies (stuff quail) for later in the week, a vacuum packed onglet (containing two hanger steaks, the muscles on either side of a large central tendon that connects the muscle to the animal's diaphragm). That's when I spotted the 30-day dry aged côte du bœuf for a reasonable $20.99 per pound.

I asked for a single rib roast which ended up weighing in at a few ounces shy of three pounds. 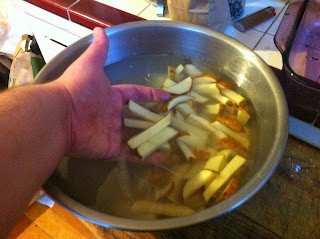 I set out to Rainbow Cooperative to continue my holiday food shopping. I grabbed four sizable spuds (your standard starchy Idaho type potato) because I was interested in trying a trick I had heard from a friend - Stephanie Crebo - who with her cooking partner Audray Brouillet (both Quebec expats) run a poutine pop-up once a month a Bender's Bar and Grill called Mad'm'Zelles Poutine.

Crebo's tip to me was to rinse the potatoes overnight in a salt and sugar brine.

In my version, once drained the potatoes were then dried out in a low (175ºF) oven for about a half an hour. The cold (300ºF) blanche in oil would be forgone in lieu of the oven drying. In hindsight I probably should have gone from the brine to the colander to the frier. 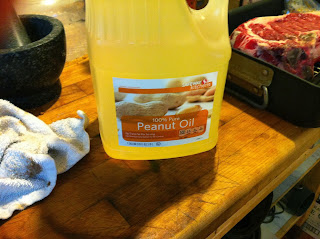 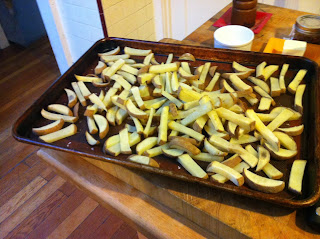 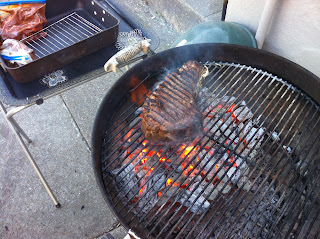 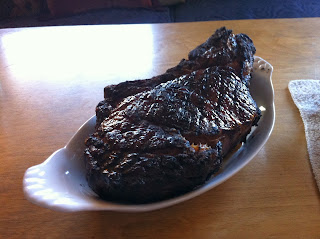 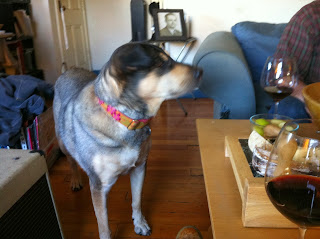 Bella is very excited by the expensive cheeses I have arranged, but she was mostly well behaved despite a near-miss with the côte and many, many incidences of pitiful whining.

Rest assured, I was happy to share some scraps of gristle and fat with her as long as she followed me into the kitchen and laid down on my command. Good girl! 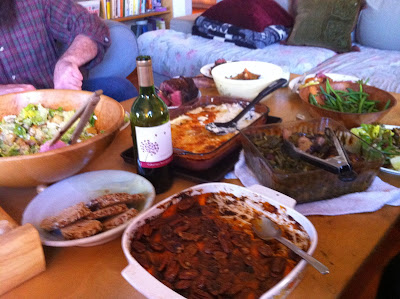 
Place roast on a wire rack over a roasting pan and cover all sides generously with salt.

Allow to rest for at least one hour prior to cooking, flipping meat over once and rubbing any juices that have leached out into the meat to evenly coat - this is myoglobin from muscle cells lysing and interstitial fluid, containing sugars and amino acids that will be converted to a nice, crunchy brown crust during the Maillard Reaction that happens when you initially sear then roast the meat.

Prepare a coal grill with a hot side and a cold side (coals occupy 50% of the area of the grill on one side). When the grill is "white hot", or a grilling surface temperature of about 650-700ºF you are ready to sear the meat.

Sear first using the fat edge of the meat. This will render the fat and also likely cause an immediate grease fire. Flip the roast over onto its side and sear for about a minute. Rotate the meat across an imaginary axis drawn lengthwise so the other, un-seared side is now on the grill and sear for another minute or so.

Pick up the steak and rotate 90º counter-clockwise to form a diamond-shaped cross hatch on the side of the meat in contact with the grill. Sear for another 30-40 seconds.

Rotate the meat again across the lengthwise radial axis so that now the original searing side is once again grill-side down.

Spin the grill so that the meat is no longer over direct heat and place the grill's lid on with the vents opened and positioned over the steak.

Cook for about 8-10 minutes and flip across the radial axis, then another 8 minutes or so until the meat springs back with some resistance when poked with your index finger.

Rest for at least 20 minutes before cutting. 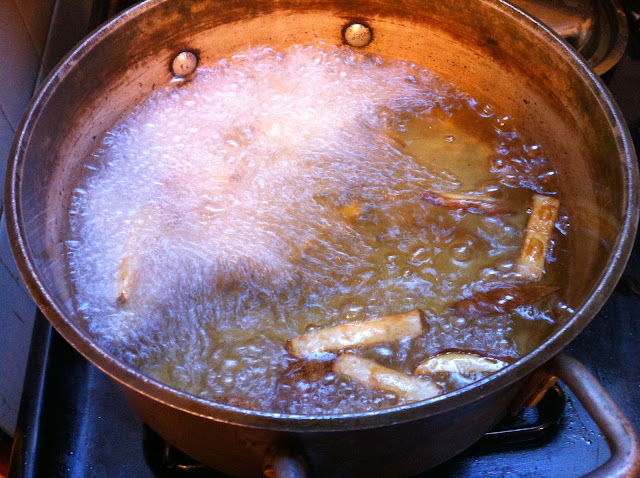 Soak potatoes in water brine solution for at least 4 hours.

Drain and optionally par cook in the oven for 30 minutes at 175ºF.

If you are going to cook the french fries raw, you will need to lower your frying oil temperature from about 380ºF to about 365ºF.

Here I am frying in hot oil (peanut oil has a very high smoke point and a fuller flavor than corn, vegetable or canola oil - all of these are notorious for being GMO crop derived - but at least the peanut oil tastes better).

You can use lard, or if you are lucky, duck fat.

Fry in small batches until golden, brown and delicious. 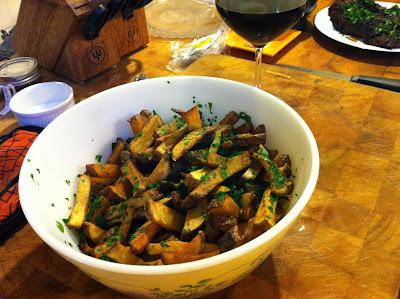