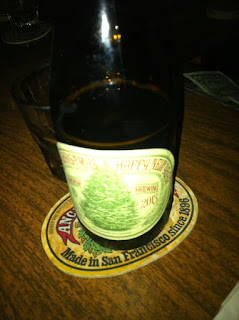 First of all, it's been touch and go for a few days but it looks like I might make it out of this year's holiday edition of "the 'itis" alive. So while I am thankful toward the person who bought me the above bottle of Christmas Ale, I must gift upon you "the gas face" for inflicting your vile plague upon me, Typhoid Mary!

Christmas Ales have long been a holiday tradition for me and my pals, from the days of trudging through actual ice and snow during the miserable winters of Cleveland, Ohio. The Great Lakes Brewing Company (of "Burning River Pale Ale" fame) would make their seasonal winter ale, Great Lakes Christmas Ale, and I'm told that the recipe would change year over year.

(Cleveland also had a tradition in which they would keep a few kegs in deep cold storage - about 35ºF - until summer for a series of events that has been canonized now as "Cleveland Christmas in July". Fun.)

I was on a mission to suss out the story behind this year's Anchor Steam Brewing Company Christmas Ale and I had opportunity, motive and proximity - my roommate's boyfriend works at the brewery which is, by the way, less than 1/4 of a mile from my apartment on the other side of the US101 at De Haro and Mariposa.

Plugging the boyfriend for information was likely a non-starter. The last two times I had seen him he was returning from indulgent holiday parties. So while I gained no more insight from him than I would using my own palette, I do have some handy blackmail photos of him, fully clothed, one boot off, laying sideways across my roommate's bed, face down, ass up.

What I do know about the Anchor Steam yearly holiday brew is that no two are alike in the 38 years they have been brewing the special seasonal ale - each brew with a custom label illustrated by artist James Stitt.

...And the recipe is "top secret" (cue dramatic music).

Better brewers than I would be able to get you in the neighborhood of the type of malts, hops and flavorings used this year. In over a decade of Christmas Ales this year is one of my favorites, a balanced dark malt ale with medium hops (thank you! enough with this "extreme hopping, 120 minute, 9000 IBU" crap that has swept the nation).

The predominant spice is coriander, which has tones of citrus that are no doubt carried over by dried orange or tangerine peels. I would not be shocked if there was a laundry list of other herbs and spices: a whiff of juniper, a hint of cardamom, a pinch of hibiscus and black tea.

I look forward to having the brewmaster at Anchor Steam roundly mock me for my wrong guesses (but I'm not wrong about the coriander, that one I stand by).

If you are lucky you can get a private tour of Anchor Steam Brewing Company, as I did more than ten years ago. If you do the tour between November and January, look forward to getting a free taste of the Christmas Ale. Also, you get as many hot dogs as you care to eat.