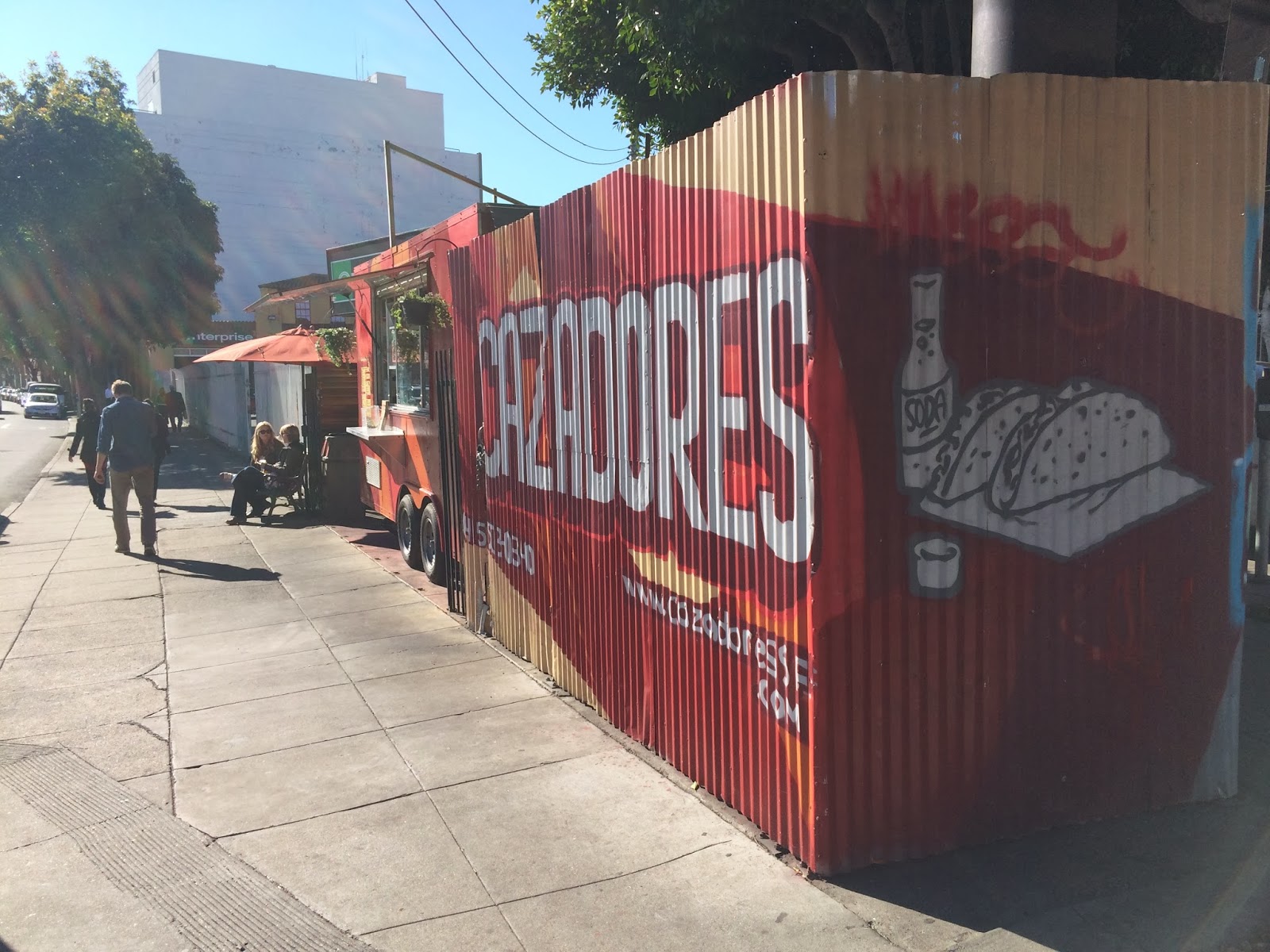 She has brown hair, a full mouth and dark eyes - what my roommate would call "my type."

Of course, my type is not a monolith even if it appears so on the surface (or you and your roommate are playing "hot or not" with your friends list late one night after a few too many drinks). In this case, I love this woman because she gives me perfect burritos carnitas every time with flavorful hot salsa and a smile... then immediately goes back to haranguing her cook.

She's probably the owner's daughter, so if he reads this I must confess mis intenciones son puras.*

The place to get this is the taco truck Cazadores (like the tequila, sin tequila), whose stationary truck advertises their Twitter handle (@casadores_sf).

The truck is stationary with a small fenced in patio adjacent to it where you can eat somewhat shielded from the sight and sound of traffic running along Mission and South Van Ness. Their website advertises that they operate from 9AM to 6:30AM however I am fairly certain they mean 9AM-3PM.

The current owner took over the truck six years ago but the truck has been stationary since 1983.

ETA: According to a long-time San Francisco Department of Building Inspection employee what works across the street from me (in what she calls "the most unsafe building in all of San Francisco"), the taco truck showed up no earlier than 1996.

"So if you unmoored this truck could you drive it?"

"No sir," said the older gentleman who owns Cazadores.

"Not even in the case of the zombie apocalypse?"

He looks confused then shakes his head no. So, heads up - stock up on burritos here but don't expect a ride out of town.

If you are in the neighborhood, try to get there before noon so you won't have to wait in line.

Cazadores also has some healthier selections than fried pork shoulder: tacos made with grilled tilapia; a grilled shrimp, cilantro and lime salad. Of course, you can break worse and have a bacon wrapped hot dog with fries. I also stop by sometimes for breakfast - they have a breakfast burrito with potatoes instead of rice, eggs and your choice of breakfast meats and pico de gallo that is served until 11AM. 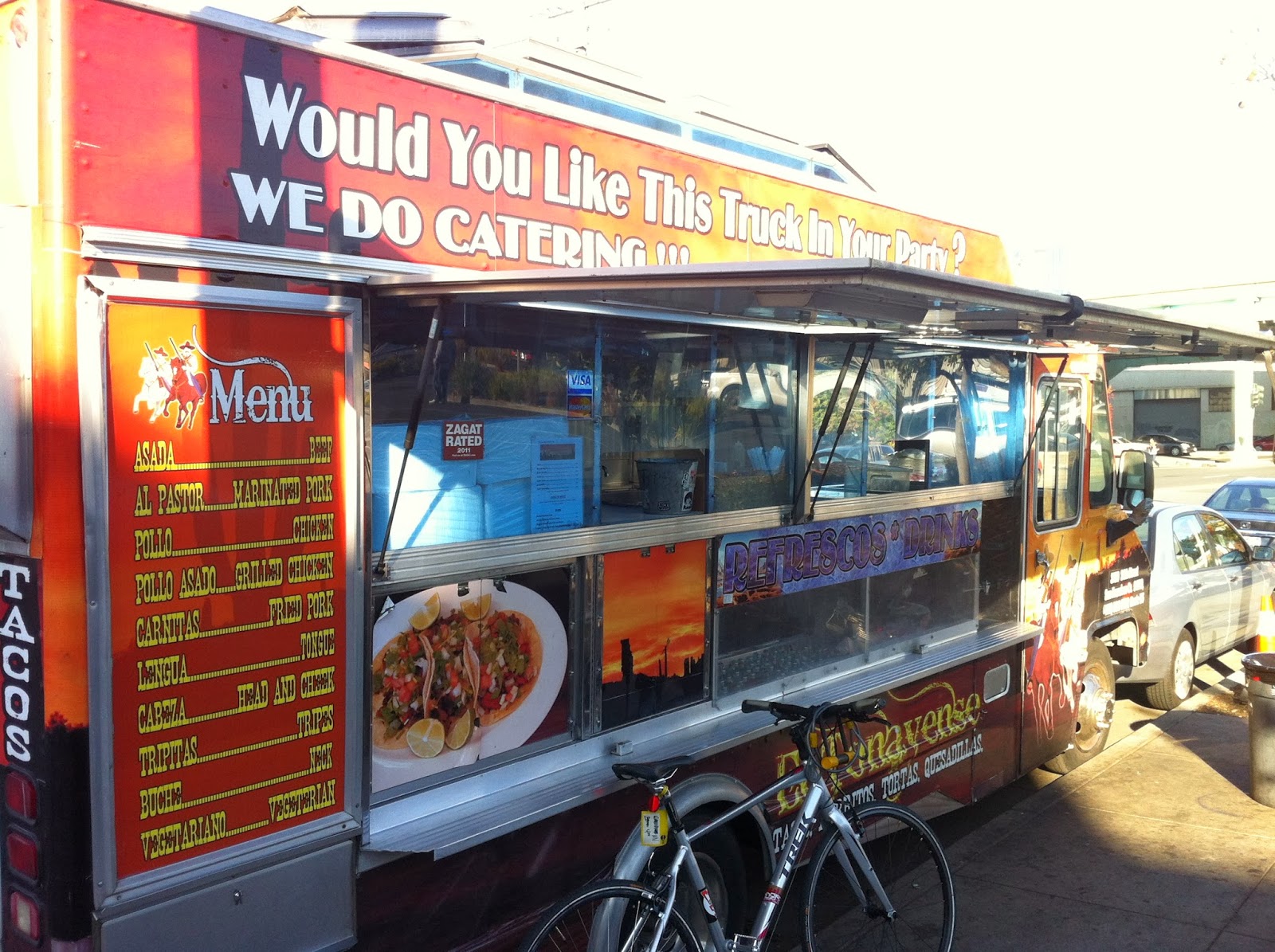 As a long time shopper at Rainbow Cooperative Grocery I've often wandered by the El Tonayense truck on Harrison and 14th (between Office Max and Best Buy) many times, but never ate there until I started working in mid-Mission.

Now I bike to work (most days... and wouldn't be able to were it not for the current drought), so I decided to try them out.

They have a traditional selection of meat, including my favorite burrito stuffings of lengua and cabeza.

The regular burrito comes with crema and queso, which I usually hold.

Like Cazadores, El Tonayense does a brisk lunch business for mid-Mission and SOMA workers of all stripes. This truck is one of several that Restaurant El Tonayense operates throughout the bay area.

* Who are we kidding, my intentions are almost never pure. Which is to say, is this too convoluted a way to ask someone out for a beer? Comment on Facebook!